There's a push to remove old submerged dams that have killed hundreds of swimmers, boaters 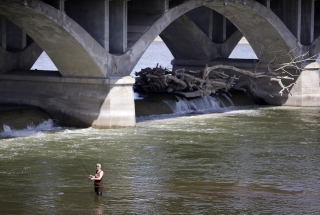 AP Photo/Charlie Neibergall [enlarge]
A fisherman casts his line earlier this month below the Scott Street dam in Des Moines, Iowa. It and another low-head dam downtown have claimed at least 15 lives.

DES MOINES, Iowa — For the better part of a century, submerged dams were workhorses of the American heartland, harnessing the power of rivers to run grain mills, generate electricity and keep lakes and ponds full of water as a hedge against drought.

These walls of concrete, called low-head dams for their minimal profile, outlasted their original purpose long ago. Today, they are better known for creating the type of wide, smooth waterway that invites city planners to turn an urban river into rustic recreational space.

But beneath the seemingly gentle cascades and quiet rumble, the dams hide a sinister secret: They have dragged hundreds of unsuspecting swimmers and boaters into their churning waters and drowned them, sometimes within sight of busy sidewalks and cafes.

“The builders of these dams have created a very elegant trap for human beings,” said Nate Hoogeveen, who heads river programs for the Iowa Department of Natural Resources. “Once people go over the dam, it's impossible to climb out.”

Now a spike in deaths is inciting a debate about whether the dams should be ripped out, even if it means letting scenic riverbanks turn to mud.

Since the 1950s, at least 441 people have died at 235 low-head dams in 38 states, according to researchers at Brigham Young University. More than one-third of the deaths have occurred in Iowa, Minnesota and Pennsylvania. Other top states for low-head dam deaths include Illinois, California, Maryland, Ohio, Texas and Virginia.

About half of those deaths occurred in the past 15 years — a period when many cities have sought to repurpose their rivers into picturesque attractions that would draw tourists and shoppers to business districts. Many rivers once used mostly by fishermen are now teeming with kayakers and rowing teams and used as the site for summer festivals.

The dams, typically built in the early 1900s, can look harmless, especially from upriver. An approaching boater or swimmer often sees nothing more menacing than a gentle drop, perhaps as little as 4 or 5 feet.

But once they fall into the roiling water below, people find themselves pounded by a never-ending wave of water that forces them to the bottom. If they can bob to the surface, the recirculating current carries them back to the face of the dam and the nightmare begins again.

Experts say the number of dead is undoubtedly higher than the confirmed cases. No government agency tracks the deaths, and it's unclear how many low-head dams even exist. Estimates range from 3,000 to 5,000.

On the Des Moines River, two low-head dams stand at either end of a half-mile stretch of the channel that runs through downtown Des Moines. At least 15 people have died at the Center Street Dam and the Scott Street Dam.

Luther Aadland, a Minnesota river ecologist and leader in efforts to remove the dams, recalls witnessing a dog caught in the rush of water below a dam.

“It was very disturbing,” he said. “I thought about jumping in to help, even though I knew it would have been certain death for me.”

It's unclear what's behind the increased deaths in recent years, but Bruce Tschantz, a Knoxville, Tennessee, hydraulic engineer who has become an expert on the dams, believes it's a combination of people spending more time on rivers and not understanding the power of the churning water.

Making matters worse is the fact that many dams are poorly marked and lack lines or buoys for imperiled boaters or swimmers to grasp.

Many states will help finance the removal of dams, but it can cost $1 million or more. Community leaders also face the concerns of residents who fear that, without a dam, their riverfront homes will overlook nothing more than a muddy creek.

A half-dozen people have died in the past decade at Geneva's low-head dam on the Fox River, including a kayaker last spring. But residents have resisted removing it, noting the structure, which helps provide a postcard-pretty backdrop for Geneva's downtown, is clearly marked.

In South Whitehall Township, Pennsylvania, officials rejected a proposal to remove a dam even though the state of Pennsylvania probably would have funded the demolition.

“People like the aesthetic, the noise,” said board President Christina Morgan.

Iowa helps subsidize the removal of four or five dams a year. But Des Moines officials are still wary of the expense and of possibly hurting recreation by lowering the river level.

“It's like they're waiting for a bunch of deaths before they do anything,” said Julie Kunkle, who has pushed unsuccessfully for city action since her brother Steve Nourse died while trying to kayak through the Scott Street Dam during high water in 2002.