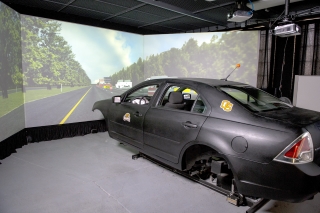 Images from OSU [enlarge]
The lab will use OSU’s existing driving simulator as one of its components.

To improve construction safety, an Oregon State University professor says he will need to work in a “cave.”

In this case, the cave will be a lab where construction workers can duplicate the look and feel of being on the job.

The simulated environment will help workers understand and react to real-life scenarios and, ideally, learn techniques that will save lives in the Northwest and across the country.

Professor John Gambatese, a civil and construction engineer at OSU, said a recent grant from two Northwest construction companies will provide seed money for the most advanced construction safety lab in the country.

The $1 million grant from Knife River Corp. and MDU Construction Services Group, both of North Dakota, will be part of an approximately $4 million lab at OSU's Civil Engineering Department with the sole purpose of improving work zone safety.

“Construction is one of the industries that regularly experiences the highest rate of fatalities,” Gambatese said. “It's up there with agriculture and mining, in terms of worker safety hazards. I'm motivated to try to make that better.”

The lab will be called the MDU Resources Group Construction Safety Laboratory. It will create real-world work sites and simulate dangers through a programmable, interactive, high-definition projection system. It will also have a driving simulator to study operator behavior and what actions workers take inside a work zone full of equipment and other vehicles.

“The new lab will simulate the cab of a crane, a truck or excavator, for example, so we can study the interaction between construction equipment and people who drive through or past construction sites,” Gambatese said. 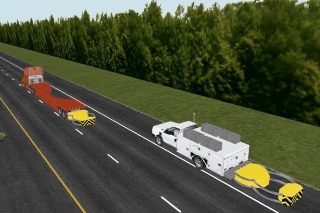 [enlarge]
Simulations could include how mobile barriers are placed.

“We'll be able to identify safer ways to work and also study how we can improve productivity and minimize costs,” Dickson said.

Gray said the $1 million donation from his company and MDU came on the heels of two tragedies for Knife River.

In one incident in 2012, an intoxicated driver hit and killed a Knife River worker as he was placing signs warning of road work ahead.

In a second incident about a year later, a Knife River employee was killed when a man driving a semi-trailer struck the worker's pickup and arrow board trailer, and a piece of the trailer broke off and hit the worker as she was breaking down a portable sign near the guardrail.

But Gray said that slowing down traffic near construction sites isn't always a prescription for a safer environment.

“The more you slow down traffic, that creates new hazards for workers,” he said. “So reducing speeds is not always the solution.”

At OSU, Gambatese has done extensive studies to determine how to make repaving projects safer.

Such projects, which he said are common in Oregon and Washington, require as much or more safety design than, for example, a bridge project because repaving projects often extend for 10 or 20 miles and are performed at night.

“The control of risks is more difficult for the drivers and the workers” at such projects, he said. “We've been doing research into what type of safety elements to put in work zones to alert drivers to make them more aware and space them out farther.”

The new lab, which Gambatese said will be complete in about two years, will also help researchers study ways to apply safety measures in the design phase as a way to avoid accidents.

The size of the lab and degree of resolution of the projection system will depend on how much money the university raises in the next two years, Gambatese said. Either way, he said, the lab will “have a big range of capabilities.”