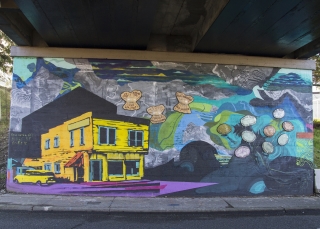 The concrete walls under the railroad trestle at South 66th Street and South Tacoma Way in Tacoma had been marked with graffiti for decades before a group of local artists got ahold of them last year.

So far, there's only been one attempt at messing with the mural, which was dedicated in January.

“There was one really subtle mark that we noticed at the dedication, but we almost overlooked it because they used matching paint,” said Barbara Luecke, Sound Transit's public art program manager. “It was very artful the way they did it.”

Luecke said the expansive mural titled “Manitou Trestle” is “quite a turnaround story.”

It depicts historic South Tacoma buildings and includes images of native flowers and plants and quotes, and was created with input from the Manitou neighborhood and city officials.

The mural is the sixth public art project for the transit agency's Sounder commuter rail extension to Lakewood, which began service in 2012. 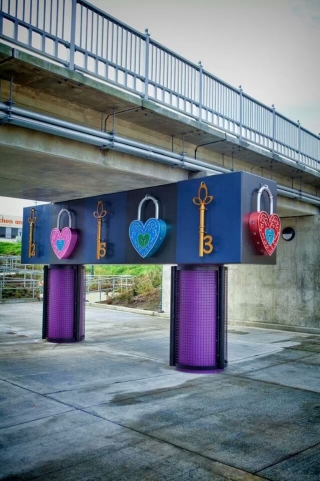 [enlarge]
Diane Hansen installed “Love Locks” on the pedestrian underpass of the A Street/Sounder bridge in Tacoma’s Dome District.

The other projects are “Love Locks” by artist Diane Hansen, which gives pedestrians the chance to show their love for someone by attaching personalized padlocks along the A Street railroad underpass; “Wild Parcel,” a small green space with industrial objects by Elizabeth Conner at the Tacoma Dome Station; “Landmark” and “End of the Line,” a pair of sculptures by Ilan Averbuch at the South Tacoma Station; and “Flame,” a large bronze sculpture by Mark Calderon at the Lakewood Station.

In the Dome District of Tacoma, Sound Transit commissioned James Sinding to create an art project meant to be seen up-close by pedestrians. It will be near the Pacific Avenue rail bridge, which was created as part of the commuter rail extension to Lakewood.

The transit agency also commissioned Sean Orlando and David Shulman to create a prominent gateway art project around the railroad crossing at Pacific Avenue in that neighborhood.

Sound Transit plans, builds and operates regional transit systems and services for the Central Puget Sound region. STart, its art program, has commissioned artworks by nationally renowned artists and emerging public artists, many from the Northwest.

The idea is to make Sound Transit light rail, commuter rail and express bus system stations and the agency's other transit-related projects, such as underpasses and overpasses, reflect the culture and sensibility of the community, the agency said.

One percent of the non-tunneling construction cost of Sound Transit projects goes to the art program. About 100 permanent art projects have been created since the program was instituted in 1998, the agency said. Sound Transit's STart program has commissioned $17.8 million in public art projects through 2014.

Luecke said the artwork creates landmarks for communities and offers a sense of place. 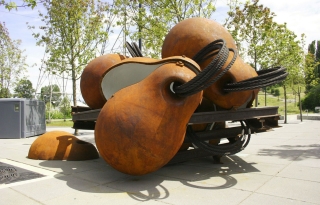 [enlarge]
“Parable” is a sculpture by Buster Simpson at the Rainier Beach Link light rail station.

Beautiful artwork at the train and bus stations, Luecke said, can help pull people out of their daily grind and give them a lift. “It's part of a well-designed place,” she said.

Sound Transit has commissioned temporary artwork to lessen the impact during construction of some of its projects that affect nearby neighbors. For instance, it put art in storefronts in buildings it purchased to construct the Capitol Hill light rail station.

It also produced a series of temporary art projects — some painted, some attachments, some stop-action animation — on the construction barrier near the Capitol Hill station.

Luecke said the agency has an art collection specialist who cleans and looks out for artwork created as part the program, but there's not been much damage.

Artist Christopher Paul Jordan said that, before the mural at South 66th Street and South Tacoma Way was created, the artists discovered community members had used the concrete walls as a canvas for decades. People would write everything from poetry to memorials for loved ones on the walls.

The artists also learned that other locals would paint over what had been written, to keep the walls clean.

So the artists tried to show the connection between both points of view.

Jordan said that at one point rail had been a big part of the Manitou/South Tacoma area, but that had changed over time. And now Sound Transit was reviving the trestle.

So Jordan and Stoll painted local historic buildings and showed changes in the natural history of the area in the mural. Riedener used ceramic tiles to create images of indigenous plants, with phrases and words of wisdom used in the community stamped onto them.

The message is “The physical environment changes,” Jordan said. “Shared experiences and memorials are eternal.”