By JANET EASTMAN
The Oregonian 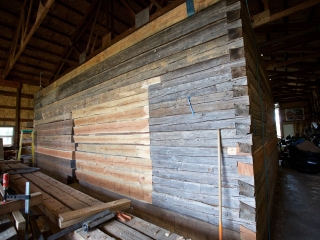 AP Photo/The Oregonian, Michael Lloyd [enlarge]
The cabin was built with logs stacked 17 high that originally fit together so tightly there was no need to fill in gaps with chinking.

MOLALLA, Ore. — Protected inside a workshop hidden among Clackamas County farmland is a mysterious log dwelling that may prompt a rewrite of Oregon's long-held history.

If experts' theories pan out, the 18-foot-wide structure — called the Molalla Log House — predates the start of Lewis and Clark's 1804 expedition by a decade.

The current thinking is that the large, inventive log building could have been handmade by Russian farmers and craftsmen sent by Catherine the Great to settle in the Willamette Valley. Growing wheat and gathering beaver and elk pelts here could have aided the tsarina's struggling Alaskan fur trade.

That the log cabin was made by foreigners is clear. It's unlike pioneer construction seen in Oregon until now.

The 25-foot-long Douglas fir logs, stacked 17 high, originally fit together so tightly there was no need to add chinking to fill in gaps.

Fine woodworking, similar to making a cabinet rather than a settlers' cabin, joined the floor, walls and roof so well that no nails were needed until a century later. In 1892, the whole building was taken apart, moved on a wagon from its original site and reconstructed by craftsmen perhaps with lesser skills than the original builders.

In 2008, the deteriorating structure, which had been a house, animal shelter, machine shed and the Fox Granary, was disassembled and moved again to a storage facility. Here, it's been analyzed, preserved and restored.

Gregg Olson of Historic Building Repair, who has saved several of Oregon's oldest log buildings, has been using antique hand tools to recreate pieces too fragile to be part of the rebuilt structure. Each original piece has been carefully saved and documented.

Moving this hefty remnant of Oregon's pioneer history is daunting. Fragile wood eroded by the elements requires that each log be lifted from its position and hand carried to a flat-bed truck.

But the original builders made it easier: The logs were hand hewn to act like giant Lincoln Logs that could be assembled, then disassembled. Pencil marks reveal an ingenious numbering system.

“It's interesting, whatever it is and whoever built it,” says Olson, who has been working painstakingly for seven years with architectural historian Pam Hayden to unearth the origins of the dwelling.

Renegade Russian fur trappers? Optimistic colonists? Adventurous Europeans allowed to briefly stake a small claim in the western foothills of the Cascade Mountains where Native Americans had lived for centuries?

But they do have theories, stacks of research and dating methods that lead them to believe the structure may have been built in 1799, or at least between 1795 and 1810.

Their almost 200-page treatise, titled “Molalla Log House-Fox Granary, Theory of the Origins of a Potential Surviving Relic of a 1790s Russian Occupation of the Oregon Country,” tracks their exhaustive study of architectural history, archaeology, dendrochronology and historic preservation.

If it's true, the settlers in the wilderness — Olson thinks from 10 to 50 people — may have agreed to grow food in the fertile Willamette Valley to trade with the Russian ships plying the Columbia River and supply the fur company headquartered on Alaska's Kodiak Island.

Restore Oregon, the National Trust for Historic Preservation, Clackamas County Cultural Coalition and Molalla Area Historical Society have supported the restoration and preservation efforts. The Kinsman Foundation's grants funded much of the work.

“The unique construction and extraordinary craftsmanship of the Molalla Log House offer fascinating clues to a mystery that we didn't even know existed about the earliest white exploration and settlement of the Pacific Northwest,” says Peggy Moretti, executive director of Restore Oregon, a nonprofit organization with preservation efforts that span from the pioneer-era to midcentury modern buildings.

“It may well add a new chapter to our history,” she adds, “and we hope more evidence will be uncovered to further substantiate Pam and Gregg's very compelling theory.”

In 1991, with Hayden's guidance, Clackamas County declared the log building a historic landmark. In 2007, after she retired as a historic preservation specialist, she rode by the building. The roof had caved in and the structure was in danger of collapsing.

She worked with the property owner to donate both the building and money to save it. Volunteers helped move the pieces inside a warehouse.

The structure was to be disassembled and moved earlier this month to another storage facility.

Olson and Hayden hope this is the last time the Molalla Log House will be uprooted until it finally finds a permanent home. Hayden says they are searching for a site and funding so the log structure can be interpreted for its architectural and cultural history.

The project team also needs help to find out the complete story of what could be Oregon's oldest structure: Who built it and why? Anyone with knowledge of 18th-century European construction and Oregon history who has information should contact Hayden at pamelahayden@gmail.com.

Restore Oregon's Moretti is also eager to open a new chapter in the state's history.

“As with later settlement-era buildings, we stand in awe of the skills, fortitude and hand-hewn pioneer spirit the Molalla Log House embodies,” says Moretti. “It deserves a permanent, protected place where those important lessons can be passed forward.”