Ballard Reuse reinvents the business of recycling building materials, and it's a hit 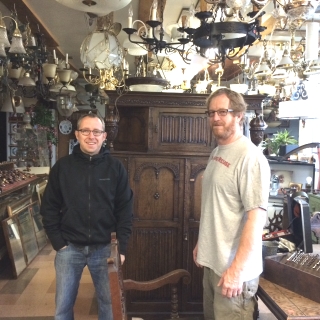 Photo from Ballard Reuse [enlarge]
Some items at Ballard Reuse are more than a century old. The store’s owners are Joel Blaschke, left, and Pat Finn Coven.

“If you go down Ballard Avenue or Market Street, almost every business has something from our store, such as chairs or display racks,” said Pat Finn Coven, co-owner of Ballard Reuse. “People buy things for movie sets or to stage houses with, and a local artist buys window panes to paint things on, such as Snoqualmie Falls.”

Located at 1440 N.W. 52nd St., Ballard Reuse is coming off a banner first year, which Finn Coven credits as much to the local housing market as to an improved business model.

“We have great materials, more signage, more local events and are using social media,” Finn Coven said. “And we have a great staff that's highly motivated.”

The turnaround is dramatic considering that Ballard Reuse's predecessor, RE Store, shut its doors at the same location a year ago due to cash flow issues. RE Store was operated by Bellingham-based nonprofit RE Sources for Sustainable Communities, which opened the Ballard store in 1999.

Finn Coven said he devoted 14 years to RE Store and consequently struggled to find a way to make the revamped recycled building materials business fly.

“It wasn't working,” Finn Coven said about RE Store. “I threw a number of ideas for restructuring and nothing worked, so they laid off the staff.”

Where the former RE Store had reduced hours during the winter, Ballard Reuse added hours and initiated a $2-an-hour employee raise.

“We scrambled and bounced ideas off each other about how to make it work,” he said. “It was an interesting leap of faith. A bit nerve racking. But it proved to be the right decision.”

Finn Coven and Ballard Reuse co-owner Joel Blaschke bought the inventory from the former RE Store and formed an alliance with Seattle Recreative, a nonprofit arts education group that receives used building materials and trades them to help fund its programs.

The new business model netted immediate results, with Ballard Reuse pulling in more money in its first year than any previous year when the business was called RE Store, Finn Coven said.

“We've been open less than a year and had a higher grossing year than RE Store had in 15 years,” he said.

There's not much that Ballard Reuse turns down, when it comes to building materials — from windows and doors to cabinet pulls, pavers and even weed whackers, he said.

“We have a number of items that are over 100 years old, but it really runs every era,” he said. “That's what makes the store exciting. People come looking for one thing and find three other things they're excited about.”

The store caters to developers, homeowners, contractors and designers.

“If a contractor is going to demo a house, we pull out all we can before the demolition,” Finn Coven said.

Lumber comes to the store in many different forms, such as old school bleachers or, as was recently the case, large pallets that Boeing used to ship airplane parts. The pallets could be reused as counters or tables.

“Our mission is to keep quality building materials out of the landfill,” he said.

Blaschke, who joined the RE Store in 2001, said the revamped store helps the environment and works as a viable business.

“There is so much great stuff out there that is being thrown away on a daily basis,” he said. “We are able to save it from the landfill and provide jobs from what other people are essentially throwing away and offer it to the public at a reasonable price. A lot of these older materials were made to last more than one lifetime and we are able to pass them on to someone else for hopefully another lifetime.”

Finn Coven joined the building materials reuse cause early in the Northwest housing boom. He moved to Seattle from Connecticut in 1994, with a longtime interest in environmental issues — working for several years in Seattle for Greenpeace before joining RE Store in 2000. Finn Coven worked his way up the company, reaching the position of operations manager before the store closed.

“I thought architectural salvage was interesting and I liked the environmental side of keeping the materials out of landfills,” he said.

The store draws visitors from all over Washington, he said. It has also benefited from increased foot traffic that has coincided with Ballard's growth.

“Ballard is just blowing up,” Finn Coven said. “Now Ballard is a brewing district with 10 microbreweries. We have a lot of people walking by the store, so the foot traffic is good. And we're not cash-strapped, so we're financially secure.”

As the store begins its second year, Blaschke said one of the biggest hurdles is pairing contractors with the right materials at the right time.

“It's a challenge, keeping up with increasingly tight construction schedules,” he said. “People want things built yesterday, so we have to convince contractors to treat us like any other sub and make time for us in their schedule. We have to convince them of the benefits of reuse, and once they realize how easy it is to save these materials they usually will make the effort.”