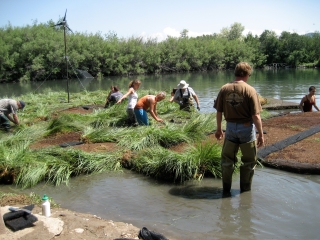 You can clean the water in soupy, green ponds naturally, but sometimes nature needs a little shove to get things going.

Bruce Kania was an inventor and outdoorsman living in Montana in 2000 when he noticed his black dog, Rufus, emerge from a stinking pond with his coat turned red. Kania smelled an opportunity.

He took inspiration from floating peat bogs of his native northern Wisconsin, where the waters are crystal clear. He wondered if he could recreate the natural water-filtering processes of the floating bogs elsewhere.

Kania doesn't have an environmental science background — he majored in social studies at the University of Wisconsin — but he brought together a team of engineers and plant specialists to develop the idea.

The bogs are basically floating wetlands, and the team found it could use manmade materials to build artificial islands that performed the same function.

Kania started his company, Floating Island International, in 2005 at his large spread outside Billings, Montana, which serves as a testing ground for his products.

She said the floating islands “harness the power of nature to do what a bioreactor would do at wastewater treatment plant.”

But the islands are much cheaper.

“The small ones can be launched by anybody,” she said.

The islands are constructed from bonded layers of recycled plastic bottles that form a porous, buoyant material that Kania compared to a loofah. The material allows plant roots to grow through it and reach the water underneath.

Individual island modules are cinched together, planted with native vegetation, and anchored into place.

The company works with licensed manufacturers, who can produce 2,000 to 4,000 square feet of island material a day. Each module is around 5 feet by 7.5 feet. The modules are trucked to the site, where they're assembled using cables or high-tensile webbing.

The islands are customized for their location. They've been installed in ponds, lakes, streams and even along ocean shorelines.

Modules are typically 6-8 inches thick, but they can be built 2-3 feet thick and are strong enough to support gravel, benches and other park furniture, and can serve as docks, levees and bridges.

Kania said the company has built more than 6,000 islands, with the largest being a nearly 55,000-square-foot project in New Zealand. Most islands are 25 square feet or smaller, she said.

Typical customers include municipalities, water conservation districts and lakeside homeowners. The company has licensees in the U.S. and abroad, in countries such as New Zealand and the United Kingdom.

The city of Seattle has installed several floating islands, including at Meadowbrook Pond in Lake City.

Linda Krippner, a wetland and wildlife ecologist with an environmental consulting firm, said the islands appear to be doing well there.

“I always see Canada geese and mallards on the islands when I go,” she said.

Krippner is serving as a permitting consultant for a houseboat project on Lake Union that will install about 140 square feet of floating islands later this year.

She said a fish biologist turned her onto the idea of building the floating islands, and she was excited by it.

Krippner added that the islands aren't necessary for the houseboat project, but the owner is installing them to push the technology forward.

The Kootenai Environmental Alliance in Coeur d'Alene, Idaho, installed a floating wetland at Hayden Lake to improve water quality there.

The $23,000 project will help remove phosphorous from the lake, a representative told the Spokane Spokesman Review. The floating wetland could become a prototype for other lakes in the region if it is successful.

Kania described the water-cleansing function of the islands as “biomimicry” — a duplication of natural processes.

Here's how the islands work:

Imagine an algae-covered pond fed by contaminated runoff. Plant roots under the islands attract microbes that cleanse the water and turn unwanted nutrients such as phosphorous into fish food. Inorganic solids such as heavy metals slough off and sink to the bottom of the pond. The process helps remove ammonium, nitrates, phosphorus, organic carbon and suspended solids from the water, and over time prevents or slows algae growth and restores habitat for other aquatic life.

Pumps can be incorporated into the islands to circulate and aerate more than 10,000 gallons of water a minute, speeding the natural filtering process.

The islands can be used in wastewater lagoons, farm effluent ponds and other waterways affected by sewage or landfill effluent. They can also be used for other applications, such as habitat management, wetland restoration, breaking waves, or for parks and recreational projects.

A project on a lake in Northern California for the U.S. Army Corp of Engineers involved creating habitat for a colony of Caspian terns in order to keep them away from a juvenile salmon restoration area.

Kania said the islands probably aren't ideal for every situation — they don't do well in salty or acidic water, for example — but the company sees potential for new uses, such as soaking up oil spills. The company would also like to study how well the islands remove pharmaceuticals and BPA (a chemical found in plastics and resins) from the water.

The company would also like to tap into the large agricultural market, where regulations could soon require farms to manage wastewater ponds more carefully.

Asked whether the islands can be removed once the water is healthy again, Kania said that's a situation that hasn't come up. Even if people stopped using nutrient-laden fertilizers, it would take 50 years for all the existing fertilizer in the ground to dissipate, she said.