By MARY STONE
The Lewiston Tribune 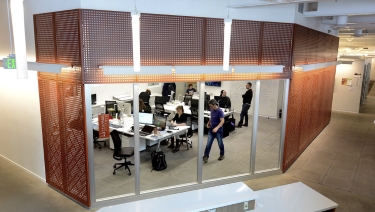 Barry Kough/Lewiston Tribune via AP [enlarge]
Students from different disciplines gather in one of the changeable spaces designed to promote creative group work.

MOSCOW, Idaho — Researchers at the University of Idaho's new Integrated Research and Innovation Center are developing video games that evolve in response to a player's decisions.

It's technology that computer science professor Terence Soule expects will soon be in demand, reported The Lewiston Tribune.

“The idea is to make the studio self-supporting,” Soule said.

Individuals from diverse disciplines — programming, art, music, biology, business and law — are working together to build and market the cutting-edge “polymorphic” games.

The IRIC, as the center is called, was built with exactly that sort of collaboration in mind.

Researchers were moving into the 70,000-square-foot building in the weeks before its opening was officially celebrated with a ribbon-cutting ceremony in late January.

The building, on the campus mall across from the agricultural sciences building, doesn't belong to any one college at the university, facility manager Russ McClanahan said.

Instead, McClanahan said, it offers a variety of lab environments for projects across a wide array of disciplines.

More than two dozen groups already are working in the IRIC, putting it at about 70 percent capacity. Projects vary from undergraduate students planning to work there for just a few months to researchers conducting years-long studies funded by multimillion-dollar grants.

Researchers apply for space in the center, McClanahan said, with preference given to those whose projects span multiple areas of study.

The $52.55 million building was paid for primarily through bonding, with $5 million coming from the state's Permanent Building Fund and $3.55 million from university resources.

It includes a variety of differently equipped labs, conference rooms and open areas that students and researchers can configure as necessary for planning and reviewing group projects.

“We're strictly research,” McClanahan said. “No classrooms in this building.”

Anthropology graduate student Renee Campbell sorted through objects from a current project in one of the IRIC's “flex labs.”

“This is officially our first lab session in here today,” Campbell said.

A mix of graduate and undergraduate students from fields including anthropology, archaeology and chemistry will collaborate on projects in the lab.

Like the rest of the building, the lab's white walls are bathed with light.

“It's beautiful and it's bright,” Campbell said of the new space. “A lot of archaeology labs are in basements.”

Her work exploring the pale cyst nematode — a parasitic roundworm that affects potatoes — will be facilitated by her proximity to the Genomics Resources Core, which is just one door away, Dandurand said.

“To have them there is like, what a resource,” she said. “Lucky us.”