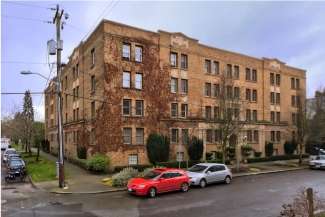 Photo courtesy of Cadence Real Estate [enlarge]
The owner of the Whitworth Apartments on Capitol Hill is planning a seismic retrofit in advance of new city rules that could require retrofits for unreinforced masonry buildings.

The Whitworth Apartments at 1619 E. John St. is one of those older brick buildings on Capitol Hill that imbue the neighborhood with historical charm and a sense of place.

It's also one of more than 1,150 structures on the city of Seattle's list of unreinforced masonry buildings, which are especially vulnerable to collapsing during earthquakes.

A citizen policy committee has been crafting recommendations to guide the city on new rules requiring owners to seismically retrofit their unreinforced buildings. The recommendations could be ready by April.

Peter Goldman, an owner of the Whitworth, decided not to wait for the new rules to go into effect.

His family LLC acquired the 90-year-old, 54-unit building last summer for $18.2 million, and filed a permit application for a seismic upgrade in January.

Goldman said even though the city hasn't required him to make improvements, he sees the retrofit as a way to protect his investment.

“We intend to hold the building for a long time,” he said. “We were aware of the risk and want to take care of it.”

The Whitworth is among a growing number of retrofit projects that the structural engineering firm Swenson Say Faget has seen since the city notified owners about the forthcoming rules, said Derek Ohlgren, a project engineer at the firm.

“I would expect an even larger increase in the number of retrofit projects if the city fully adopts the retrofit requirements,” he said.

Unreinforced masonry buildings are usually pre-World War II structures built with brick and little, if any, steel reinforcements in the walls. They may also lack connections between the exterior walls and the roof or floors.

During earthquakes, their walls are at risk of detaching and collapsing outward. Unbraced parapets also pose a risk of hinging at the roof and collapsing to the street.

That's why it should come as no surprise that of the 31 Seattle buildings deemed unsafe to enter after the 2001 Nisqually earthquake, 20 of them were unreinforced masonry buildings, according to the city.

The city would rather see such buildings fixed than replaced. Many of them reside in Seattle's historic preservation districts, and contribute to their historic and cultural character.

“Their loss can impact how a neighborhood recovers from an earthquake and what kind of urban fabric will replace these anchor buildings,” the city says on its website.

One of the hardest hit buildings during the 2001 earthquake was the Cadillac Hotel in Pioneer Square. Photos taken at the time show the three-story, 26,000-square-foot building missing large chunks of its facade, which tumbled to the pavement below, leaving heaps of rubble.

The building is in the Pioneer Square Preservation District, but is not a designated landmark. The owners sought at first to demolish the 1889 structure, citing the prohibitive cost of restoration. Instead, they sold the building to Historic Seattle, a nonprofit group that scraped together $10.6 million to complete seismic bracing work, masonry repair and an interior rehab.

The high cost of seismic upgrades — even for buildings that haven't collapsed in an earthquake — has been a sticking point in the city's rollout of the new ordinance, which has been in the works since at least 2008.

Many building owners have said they “don't have access to the financing they need to do this work,” said Nancy Devine, a senior structural plans engineer for the city of Seattle.

“Their ability to borrow money is tied to how much rent they can charge,” she said.

The expenses add up, but owners may find it difficult to recoup them with higher rents unless they can find ways to brace their buildings with granite countertops and free Wi-Fi.

Goldman, for example, said he doesn't plan to increase rents at the Whitworth after the project.

For funding, owners can avail themselves of tax credits for historic buildings and low-income housing, but not all older buildings meet either criterion. Devine said another possibility involves allowing more owners to sell development rights.

Other states offer property tax credits that could be used for retrofits, she said, but this option would require a change in Washington state law.

The city is also looking into providing ombudsmen who could help owners navigate the retrofit process and access available financing tools.

“It is a concern that an upgrade policy can be written in such a way that it encourages demolition, though that is not the intent of the city's policy,” Devine said. “That's why we're looking hard for financing tools for owners to use.”

The city Department of Construction and Inspections estimates that nearly 40 percent of Seattle's stock of unreinforced buildings have been retrofitted to some extent, and about 10 percent have been “substantially” retrofitted.

The city currently only requires seismic upgrades when an owner is doing a large remodel to a building.

New rules could require retrofits for all unreinforced masonry structures with three or more residential units. Once owners are informed of the new ordinance going into effect, they would have seven, 10 or 13 years to comply, depending on the risk level of the building.

High-risk buildings such as schools would have seven years to comply, but most buildings would get 13 years.

“That prevents 11th-hour situations, and gets the work going,” she said.

The project will involve a typical “bolts-plus” retrofit, which will entail bracing the 4-foot-tall parapet and anchoring the exterior masonry walls to the floors and roof with bolts. Concrete beam and lintel repairs are also planned, according to the project permit application.

Goldman said he's using the project as a chance to consider improvements to other building systems, such as the heating and plumbing.

Sean Kelly, a project manager for SHKS Architects, said projects in older buildings like the Whitworth can lend themselves to scope creep.

(Editor’s note: The story has been changed to correct Sean Kelly’s job title.)

He said he's been working on the retrofit since nearly November, overseeing the permitting process and drawing up bid documents.

The owner had also been weighing a roof replacement, Kelly said.

When it's finished, the bolts-plus retrofit will help the Whitworth hold up during a low to moderate seismic event, said Derek Ohlgren, the project engineer.

But “this approach provides a lower level of improvement than a full life safety retrofit that would comply with current codes,” he added.

Goldman said he may be saving money by getting the work done now, rather than after new rules go into effect. He expressed concerns that the city's requirements could be more stringent, and that a surge in demand for contractors and engineers could drive up their rates.

Nancy Devine agreed the new rules would create “a busy time” for the construction industry and engineering community, but said she's been told “they should be able to keep up with that level of work.”

Once the policy committee recommendations are completed this spring, city staff will take them and “actually craft what the policy would be,” Devine said. “Then from there it goes to the mayor's office and then to the City Council.”

New rules are unlikely to be passed before the end of 2017, she said.