Design Perspectives -- WSCC expansion: So what's inside the box?

With their giant exhibit halls and big loading docks, convention centers tend to push the limits of bulk and scale, but Washington State Convention Center's expansion is being designed to settle into Seattle's evolving skyline and look like it belongs.

At ground level, it will feel open and inviting — to everyone.

These are key goals for the project team as the design evolves and moves through Seattle's exhaustive review process.

The 1.5 million-square-foot, $1.4 billion expansion is intended to keep Seattle competitive in the lucrative convention market. Construction is set to begin next year, and take about three years. LMN Architects is the designer, Pine Street Group is development manager, and Magnusson Klemencic Associates is the structural and civil engineer. 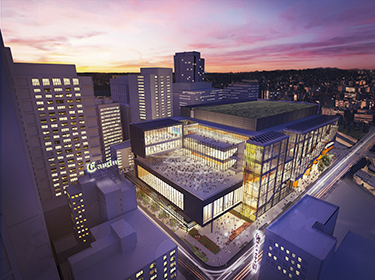 Image courtesy of LMN Architects [enlarge]
The expansion will face downtown along Ninth Avenue, with an outdoor plaza and a market arcade that will invite the public to stroll through. Architect Mark Reddington said it’s time to rethink old-school lobbies.

It's a tight fit for the site, which is now Convention Place transit station, and that's costing the city some pieces of right-of-way, and displacing public art works.

The expansion was introduced last month to Seattle Design Commission, which must decide if “public benefits” in the proposed design justify vacating a small piece of Terry Avenue and three alleyways. SDC will take another look at the project in June. In the meantime, the public comment period on the draft environmental impact statement — at http://tiny.cc/92vv9x — ends April 11.

Fitting in and reaching out takes a lot of design, and it's not done yet. But it comes down to three big moves: Break it up, compress it and then bring back the street grid. Architect Mark Reddington of LMN talked about some of the decisions made so far.

The first challenge was where to put it. Surrounded by towers, the existing convention center couldn't grow out from its current footprint. So it's stepping over the block to the north, along the freeway, to Convention Place transit station between Pine Street and Olive Way. As the light rail system expands to the north, the station will close and bus routes that use it will shift locations.

A block of Olive Way to the north of the station will be lifted for construction. Afterwards, it will be replaced and function again as a city street.

Having its existing facilities and the new ones separated is not a big problem for the convention center, which will be able to run two large events in tandem after the expansion is built. If one huge event fills both, attendees will just have to walk between the old and new sites on the street. And that's not a bad thing, for convention-goers or the city. “People come here because they like Seattle,” said Reddington. 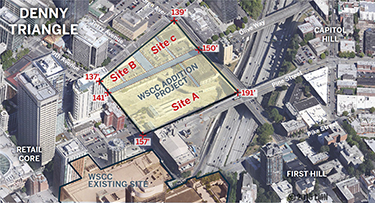 Image courtesy of LMN Architects [enlarge]
The convention center expansion will be on a site bounded by Ninth, Olive, Boren, Pine and Howell. Site B and Site C are potential co-development properties.

Next is the structure itself. Heights will vary, but it will reach about 150 feet at the high point of the sloping site, at Pine Street and Boren Avenue. To keep the footprint smaller, the expansion is likely to result in the most vertical convention center in the country, with pieces stacked high rather than spread wide. But you won't see the size from the street.

“The biggest, most clumsy parts of the program are underground,” said Reddington. “That makes the facility work.”

It won't be a bunker under there. All the public spaces, even small ones, will get natural light. The open structure, without heavy floor slabs, will make this possible. Imagine spending the day in a lofty, light-filled exhibit hall, below the streets of Seattle.

This will work because of giant “interstitial trusses” that will span the large spaces, according to structural engineer Derek Beaman of MKA.

The design team at LMN seems to love these trusses, with their big diagonals. Models arrayed in the office show convention-goers milling around them. At street level, their airy height will allow people to see in and out through a glass lobby and market arcade next to a public plaza.

Reddington said that the same structural system means less building height is needed to achieve the desired floor-to-ceiling heights inside. The floors themselves will be thinner.

Also, the pieces can fit together in lots of ways. For instance, next to each high-ceiling space in the convention center — like the 28-foot-tall lobby at the Ninth Avenue level or the 40-foot-tall ballroom on the top of the opposite side of the project — there will be as many three levels of parking or offices. Because they don't have to carry as much weight, floors at different levels can open up in places to let light through, even below ground.

Across the re-instated Olive Way, the site will be prepared to accommodate two towers that will be developed by others: a 29-story residential tower and a 16-story office tower. The loading dock for the convention center expansion will go below these co-developed projects. 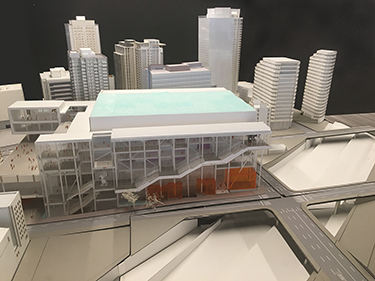 Image by Clair Enlow [enlarge]
The expansion will cantilever slightly over Interstate 5 and leave the option open to fill in more ‘lid’ over the interstate.

Blending in is one thing, but the expansion will actually reach out, too — cantilevering slightly over Interstate 5 to meet the spot where Boren Avenue crosses Pine Street. The intersection is now open to the freeway below at all corners.

There will be a block-sized open space over the freeway between Pine Street and the expansion project (to the north) and Pike Street (to the south). Pike Street connects with the existing 1980s convention center and Freeway Park, which already covers a piece of the interstate.

Could this opening be the place for an extended lid over Interstate 5?

It's not such a stretch, Reddington said. The structure of the expansion is designed to keep that option open, but it's just an option. Despite calls to study the possibility of more lidding over I-5, that's just not going to happen as part of this project, he said.

The expansion will go a short distance in reconnecting part of the city that was split apart with the huge highway. It will do this by cantilevering over the edge of the freeway and connecting with the intersection of Boren and Pine. It's up to others to take it from there.