Tacoma revitalizes itself, from the ground down

The past 20 years have brought growth and development to the Tacoma area, but few changes have been as significant as those that have taken place at ground and subsurface level.

Cleaning up the land has been a paramount goal for several local agencies, including the city of Tacoma, Pierce County and the Port of Tacoma. These municipalities, along with expert consultants, have worked with state and federal agencies — such as the state Department of Ecology and the U.S. Environmental Protection Agency — to bring substantive, positive environmental change to the region. 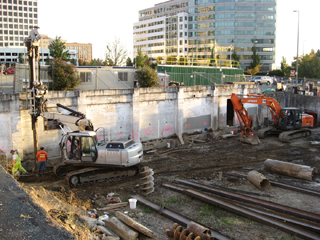 Photo courtesy of Landau Associates [enlarge]
The city of Tacoma bought the contaminated Sauro’s Cleanerama site, cleaned it up and turned it into a surface parking lot. Future plans are to redevelop it for commercial use.

Significant government, industry and private efforts have been devoted to planning, environmental investigation, source control and cleanup activities — efforts that required an investment of approximately $160 million. The results of this investment benefit the region through implementation of more sustainable methods for industrial activity, enduring attention to environmental conditions, and revitalization and redevelopment of the Commencement Bay area.

The Asarco smelter had left a legacy of contamination and scars on the landscape, but slowly things are changing for the better. The plant opened in 1890 and operated originally as a lead smelter. It was later converted for smelting of copper and lead. The smokestack, which was once the tallest in the world, was built in the early part of the 20th century.

During its copper ore processing operation, the plant specialized in smelting high arsenic ores. Arsenic from the ore was reprocessed and sold commercially. For a period of time, the smelter was the only domestic producer of arsenic.

Unfortunately, not all the arsenic and lead were captured during the smelting and processing operations and over time significant quantities of these metals were released into the environment, through fugitive emissions from the plant and through the smokestack.

The smelter site was added to the EPA’s list of Superfund sites in 1983. In the face of declining copper prices and under pressure from the EPA to reduce emissions from the smokestack, the smelter was permanently closed in 1985.

Asarco and the EPA developed comprehensive plans for the cleanup of the site, which included local redevelopment ideas such as demolition of buildings, installation of a cap and protection of the shoreline against further erosion.

Cleanup of the smelter site and surrounding properties has been ongoing since the closure. The smoke stack was demolished in 1993, but demolition of the last remaining buildings on the site wasn’t started until 2004.

In 2005, Asarco filed for Chapter 11 bankruptcy protection and set about selling the 67-acre property where the smelter formerly operated. MC Construction purchased the property in 2006 and assumed liability for cleanup and redevelopment. MC Construction’s plans for the site call for a mixed-use community with commercial retail, and single- and multi-family housing in addition to open space.

Five years later, cleanup and redevelopment are moving ahead and significant progress is being made. High-end condominiums have been built on what might arguably be some of the best view property in all of Puget Sound. Stack Hill, where the former smokestack sat, has been cleaned up and is being redeveloped with single-family homes.

The commitment to the cleanup and redevelopment of this site has allowed Tacoma residents to fully enjoy this former industrial site.

Another significant project was the remediation of the former Sauro’s Cleanerama site downtown. The former commercial dry-cleaning facility operated for more than 50 years and discharged dry-cleaning solvent to an underground sump. Several studies that were completed between 1991 and 2004 confirmed that the facility had polluted soil and groundwater.

The city acquired the land from the estate of the former owner, Pete Sauro, with the intention of developing the property for commercial use. The state Department of Ecology and the city entered into an agreement to clean up the site.

Landau Associates assisted the city with various environmental services and regulatory support during acquisition of the property and with investigation and remediation of the site. A remedial investigation was completed in tandem with an interim action to address soil contamination within the property boundaries.

The interim action was designed to prepare the property for redevelopment relatively quickly. The city recently completed a surface parking lot on the site that will help generate revenue until a larger development plan is prepared for the site and surrounding properties.

While growth and development is often thought of as a changing skyline, some of Tacoma’s most important work over the past 20 years has taken place on or below the surface. Landau Associates, whose Tacoma office is celebrating its 20th anniversary this year, is proud to have been one of many consulting firms contributing to the success of these cleanup efforts.

Although early industrial growth came at a cost to the environment, Tacoma is truly a success story in the making. Thanks to a multi-agency and multi-disciplinary effort, hundreds of acres of contaminated land are being turned into safe and usable properties for the benefit of all to enjoy.

Cindy Kester is a senior marketing coordinator with Landau Associates, a firm that specializes in environmental and geotechnical engineering and environmental permitting and natural resources consulting. Landau has offices in Edmonds, Tacoma, Seattle, Spokane, Tri-Cities and Portland.