It’s not all waste — fueling our future energy needs

Unless they have a plumbing emergency at home, most people typically do not think too much about sewage. We flush some things away and wash other things down the drain or the disposal, and then we pretty much forget about them.

Probably even fewer people think about how those things that we flush or wash away (properly described as wastewater) from our homes in underground pipes are actually a potential source of renewable energy.

Once it leaves your house, wastewater travels to a treatment plant where it undergoes a variety of purifying processes before it is released back into the environment. Although wastewater is composed of 99.94 percent water, part of the treatment process includes separating the solids, referred to as biosolids, from the liquid. 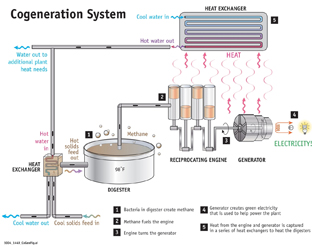 In order to minimize disposal costs, many wastewater treatment plants reduce the volume of their biosolids with anaerobic digestion, a process that uses bacteria in the absence of oxygen to break down the biosolids. This process produces heat, methane, and carbon dioxide that also need to be disposed of.

While carbon dioxide is often implicated as the primary greenhouse gas contributing to global warming, methane has roughly 23 times the global warming potential of carbon dioxide and is therefore the more harmful product of the biosolids reduction process and cannot be released in large quantities from a treatment plant.

Treatment plants have historically disposed of their methane by burning it off to produce carbon dioxide, which can then be released to the atmosphere. In recent years, the increased cost of electricity and natural gas to power the energy-intensive wastewater treatment process has driven some treatment plants, mainly in parts of the country where electricity is particularly expensive, to capture the methane and harness it to produce electricity to power their own facilities.

Other plants use it to produce electricity that can then be sold to local power utilities, and still others have implemented processes to clean the methane to the level of natural gas and inject it into existing natural gas pipelines, resulting in an additional revenue source for the plant.

It is widely reported that for each million gallons of wastewater processed by a wastewater treatment plant with an anaerobic digester, the available biogas can generate up to 35 kilowatt-hours of electricity.

Due to the relatively low cost of electricity in the Pacific Northwest, the pressure to use these kinds of technologies has not been as strong as in other parts of the country or the world. However, as prices increase and concern over greenhouse gas emissions grow, wastewater treatment plants — as well as dairies and other methane-producing facilities — are beginning to build biogas-to-energy projects.

Despite the relatively low cost of electricity in the Northwest, the King County Wastewater Treatment Division has actually been a leader in the field of turning biogas into energy.

Since 1966, the county has been using biogas produced at its West Point Treatment Plant to fuel large pumps that move wastewater through the plant, and has been turning biogas into electricity and selling it to Seattle City Light — thus saving energy, reducing greenhouse gas emissions and saving ratepayers money.

When a new cogeneration system at West Point begins operating in 2012, it will produce about 23,000 megawatt-hours of electricity each year, which could power nearly 2,300 homes. This project is being funded in part by an $8.2 million grant from the Environmental Protection Agency, which will cover more than half of construction costs.

At the South Treatment Plant in Renton, the county “scrubs” the biogas it produces and sells it to Puget Sound Energy as a very high quality substitute for petroleum natural gas.

In addition to the savings and benefits obtained by using biogas, the county treats the solids that remain after the anaerobic digestion process to a very high degree of purity and sells them as the GroCo garden amendment.

Local dairy farms are experimenting with biogas-to-energy technology as well. Anaerobic digestion can be used on dairy farms to break down manure. Rather than storing manure in lagoons and spraying it onto farm fields, some dairies have built closed digesters and collect the resulting methane to produce electricity.

A number of dairy farms in Washington have constructed anaerobic digesters and sell the resulting electricity to Puget Sound Energy. These systems are expensive to build, and in order to be cost effective, multiple farms may need to pool resources and build a single facility, requiring an added project element to transport wastes from each farm to the digester.

Instead of the expensive concrete or metal tanks that are traditionally used, this innovative covered-lagoon digester was excavated into the ground and filled with tightly packed stacks of discarded automobile tires that trap and retain bacteria from the cow manure. Heat and methane were successfully captured to produce electricity that was sold to NW Natural as renewable energy and the cost of the system was low enough that an individual dairy could afford to operate one, alleviating the need to transport dairy waste off-farm to a community digester.

This actively developing field of turning biogas into energy offers solutions to waste disposal issues while producing a reliable source of renewable energy and reducing greenhouse gases. These kinds of projects are likely to become increasingly important as petroleum resources become more scare and more costly to develop.

Grant funding and cooperative partnerships with local utilities and research institutions, as well as willingness of individuals and organizations to take risks and experiment with creative approaches, will be essential for continued progress.

Lizzie Zemke is a senior ecologist at Environmental Science Associates (ESA), a multi-disciplinary environmental consulting firm that has addressed environmental planning, water resource and regulatory issues for more than 40 years.