Our changing climate can be a job generator

In the Puget Sound region, climate change will mean a rising sea level, different snow and rain patterns, and impacts to our water supply, salmon and forests.

For more than a decade, scientists have been studying historical data and using modeling to predict, anticipate and prepare for the impacts of climate change. Local, state and federal governments have been slower to plan adaptive strategies.

Of course, such efforts are costly, and it is reasonable to ask how many resources we should devote to a long-term problem, especially in dire economic times. But done correctly, preparing for and adapting to climate change can be part of a risk management strategy that integrates necessary infrastructure improvements with new jobs both in technical fields and in the skilled trades. 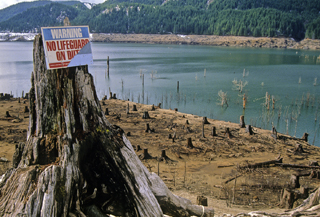 Photo courtesy of Ridolfi [enlarge]
Water supply reservoirs will dry up as precipitation shifts from snow to rain.

The University of Washington Climate Impacts Group has used historical data on sea-level rise and modeling (forecasting expected results based on certain assumptions and data inputs) to predict that sea level may rise in Puget Sound by 13 inches by the year 2100 — and a rise of 4 feet cannot be ruled out. Such an increase will certainly cause flooding of low-lying coastal areas and could also make those areas more susceptible to storm damage.

What’s more, much of the Puget Sound region depends on surface water for its water supply and most of that supply is stored in reservoirs in the Cascades. The reservoirs are designed to deliver water on an annual cycle based on a predictable supply of water from melting snow.

Most of these reservoirs tap basins that are relatively low in elevation, which means that an increase in winter temperature of a few degrees will dramatically lower the winter and spring snowpack. Less snowpack means less water will be available in the summer, when demand for both agricultural and residential uses is the highest.

Adapting to a rising sea level will require multiple strategies, such as stabilizing shorelines, restoring marshes and reengineering our low-lying infrastructure.

Traditionally, shoreline stabilization has meant constructing barriers like bulkheads made of concrete or rock. Now there is mounting evidence that these structures increase wave energy, which can increase erosion of the shoreline and degrade nearshore habitat. However, with good site analysis and planning, “soft” stabilization techniques that include vegetation, stumps, rocks and beach nourishment can be cost-effective without the negative consequences of hard structures.

Marshes are natural buffers for wave energy and serve as nursery grounds for salmon, nesting grounds for shorebirds and carbon sinks for greenhouse gases.

A project like the recent dike removal at the Nisqually National Wildlife Refuge, which inundated 760 acres as part of a decade-long, massive tidal marsh restoration effort, is a showcase for how to achieve numerous benefits from a single effort.

Projects like this take funding, yes, but in addition to delivering results, they also support and create a wide variety of jobs. Biologists are needed to evaluate the habitat, planners to recommend and monitor land use, engineers to design structures and contractors to build them.

In Olympia, the port area is low-lying, and the South Sound’s large tidal range makes many facilities particularly vulnerable to increases in sea level.

The city of Olympia has been concerned about this problem since 1990 and is in the process of analyzing the risks and devising adaptive strategies.

One effort has involved developing high-resolution topographic maps of the ground surface integrated with maps of the stormwater system and stream channels in low-lying areas. By superimposing current water levels and those predicted with a rising sea level, the city identified the areas most vulnerable to flooding. With that information, the city then developed a list of short-term responses, such as raising the floors in new construction, consolidating stormwater outfalls, installing tide gates, raising shorelines and monitoring changes.

Both white-collar and blue-collar workers are required to plan, design, construct and oversee these projects. And, of course, addressing the climate change issue will help commercial and industrial activity in and around the port thrive in a predictable way.

An affordable, stable and safe water supply is essential for the Puget Sound region. We are blessed — or cursed, depending on your tolerance for rain — with a temperate climate and abundant precipitation, most of which falls between November and April.

In the mountains, especially in the basins of moderate elevation that feed reservoirs, winter precipitation falls as snow. However, because of the temperate climate, a relatively small increase in temperature would cause much more of the precipitation to fall as rain.

Seattle Public Utilities has partnered with the UW Climate Impacts Group to predict the impacts from rising temperatures over the coming decades. One recent study by Marketa Elsner and other UW researchers predicts that the April 1 snowpack in the Cascades, which is an indicator of the amount of water available for reservoir storage over the summer, may decrease by 27 percent by 2020 to as much as 65 percent by 2080. 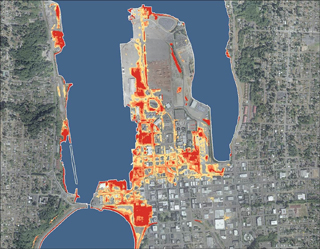 Image courtesy of city of Olympia [enlarge]
Low-lying areas of Olympia, in red and orange, are susceptible to flooding as sea level rises.

Many of these strategies are low cost, relying largely on education to achieve their goals. Other strategies require policy changes — changes that will create economic opportunities for technical specialists who design and specify water-efficient equipment, for manufacturers who build and sell that equipment, and for trade workers who install and maintain it.

Measures that help our society prepare for climate change also help us shift to more efficient infrastructure — and they create jobs at all levels of skill and education. In the midst of unsettling and apparently unavoidable change, the right adaptations will give us opportunities to prepare our society, improve the built environment and generate jobs.

Colin Wagoner is a principal engineer and the CEO at Seattle-based Ridolfi Inc., an environmental consulting firm focused on sustainable solutions that improve environmental conditions. He is also on the board of People for Puget Sound.