Urban areas scale up for EcoDistricts

By 2050, the world’s population is expected to surpass 9 billion, with urban dwellers accounting for 6 billion of the total. Every two out of three people born in the next 30 years are predicted to live in cities.

While urban living concentrates people and reduces sprawl, the bad news is that cities consume 75 percent of our global energy. And 80 percent of global greenhouse-gas emissions are contributed by cities, which comprise less than 1 percent of the earth’s surface.

We need to use the resources of the city more efficiently to live in a manner that is good for the planet and its inhabitants. Where do we begin? 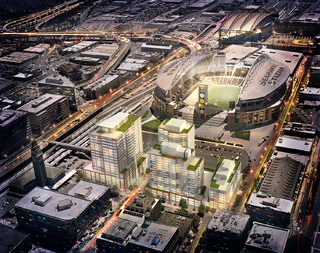 Sharing resources at the district level is a good starting point. Green neighborhoods are being envisioned here in Seattle and across the country to support design strategies for efficient use of resources at the district level. These strategies include collective harvesting of water and energy, production of food, the ability to move freely and affordably without a car, and careful stewardship, conservation and reprocessing of materials.

This macro approach to planning and design considers how collective development investments can create district-wide systems, or EcoDistricts, with economies of scale for sharing resources, waste, transit, food and public open space.

Such understanding and consideration of the broader context helps inform and connect projects on the micro level and across project scales. It’s a “scale-hopping” exercise and this kind of interconnectivity not only leads to greater efficiency overall, but fosters united and socially active urban environments.

Working at the smallest scale in a city can make a contribution to the larger scale of the city. Urban development projects at every scale (from parks to backyards, streets to freeways, buildings to cities and gutters to rivers) can balance larger transportation, land-use and environmental considerations. The most impact can be made at the overlap of the following principles for district systems and complementary projects:

• Build projects where they will be wanted.

• Build projects that will pay for themselves and enrich the welfare of others.

• Build projects that will attract partners and leverage other projects.

• Build projects where community stewardship will be cultivated.

As district systems are reconnected in new ways in redeveloping urban areas, there are tremendous opportunities to achieve new levels of environmental performance in the built environment.

In Seattle, exciting initiatives and developments are under way in various forms and scales. Each of the following projects involves participation of stakeholders to investigate innovative solutions and — teamed with local governing authorities — help devise solutions that overcome barriers to implementation. This is resulting in projects that are inextricably linked at every scale to create a more sustainable whole.

At the building scale

Rehabilitation of historic King Street Station provided opportunities for the Seattle Department of Transportation, local businesses and nearby developers to establish a district-wide sustainable approach while enhancing public transportation, pedestrian and vehicular connections to future developments.

The location of the station at the edge of a proposed 3.85-acre mixed-use redevelopment offered opportunities to share water resources. Using the station’s large roof, a proposed rainwater harvesting system was conceived to provide toilet flushing at the station and pass along excess to adjacent future developments.

Linking resources make the station one of the first buildings of its kind to target LEED platinum certification and support broader district goals.

At the block scale

Design of North Lot Stadium Place integrates building infrastructure for energy and water across land parcels to allow for future connections with district-wide systems. The project will also use urban farming strategies to cultivate organic fruits and vegetables in modular rooftop greenhouses, greenwalls, terraces and other green spaces.

The Swale on Yale project is creating urban biofiltration swales within street rights of way in the Cascade neighborhood as an amenity to the street and adjacent development. Creating a more beautiful pedestrian experience in one neighborhood is solving a larger problem in another neighborhood and having a positive impact on Lake Union. By catching and filtering stormwater flowing from approximately 435 acres on Capitol Hill into South Lake Union, the swales will treat on average more than 188 million gallons of stormwater every year, filtering silts, oils, heavy metals and other pollutants.

At the district scale

The Seattle 2030 District establishes an interdisciplinary public-private collaboration including a consortium of downtown property owners and managers who are sharing utility data for the purpose of developing a baseline energy use strategy. The collective goals are a reduction in building energy use, water use, and carbon dioxide from transportation of 10 percent by 2015 and 50 percent by 2030. Looking beyond existing building strategies, the consortium is exploring district heating, cooling and distributed generation.

In Bellevue, the Bel-Red Corridor Urban Design Plan envisions district-wide infrastructure and stormwater management that will restore Bel-Red’s watersheds to a natural state. Planned green streets will intersect stream corridors and function as urban tributaries collecting, filtering and cleaning water from the built environment through a series of rain gardens, bringing both people and clean water to these restored natural areas. Retail and high-density residential streets will be clustered around light-rail stations, allowing residents to run errands on foot and commute by public transit.

• Washington, D.C. The city is working to create an EcoDistrict model just southwest of the U.S. Capitol. The initiative seeks to meet the goals and objectives of Executive Order 13514, which prioritizes the reduction of greenhouse gas emissions throughout the federal government. It is spearheaded by a partnership of agencies that occupy the district: General Services Administration, Federal Aviation Administration, U.S. Postal Service, and U.S. departments of Energy, Housing, Urban Development and Education.

• Kansas City. The Green Impact Zone is a 150-acre block initiative to concentrate resources (funding, coordination and public-private partnerships) to transform this zone into a thriving, sustainable neighborhood. It involves a community redevelopment and weatherization program, as well as energy and water conservation through installation of a smart grid, expanded solar and other renewable sources.

• Denver. The Living City Block will create a replicable, scalable and economically viable framework for the resource efficient regeneration of cities. Its uniqueness is transforming two square blocks of existing historical buildings into a resilient, regenerative urban center. Project leadership consists of a core team of experts from the Rocky Mountain Institute, an internationally recognized energy-efficiency consultancy.

• Portland. The Portland Sustainability Institute has developed a rigorous framework for assessing and accelerating sustainability at a district scale. The framework is being tested and refined in Portland’s five pilot EcoDistricts and has broadly applicable resources and processes for other cities and neighborhoods.

As part of a winning submission to the International Living Building Institute’s 2011 Living City Design Competition, a team fully applied this concept to demonstrate how a single district can contribute to Portland’s overall performance. The concept envisions a city in balance with nature through the design of a richer street life by shifting rights of way from autos to pedestrians and bikes; green infrastructure that conveys water, connects habitat and processes waste; connected energy and water uses across districts; and urban agriculture to provide a most needed resource — food — right where it is needed.

Jerome Unterreiner is an associate partner and urban designer at ZGF Architects LLP, which has designed projects across the country to support the growth and development of EcoDistricts.