Indoor air problems may be coming from below

It is increasingly common to read about building occupants complaining of health problems related to indoor air. Problems often are attributed to mold, gasses from materials such as flooring adhesives, or more and more frequently, vapors from subsurface contamination.

Sub-slab depressurization systems (SSDSs) are a proven means to eliminate the threat of vapor intrusion into buildings.

A strip mall owner recently requested that Farallon Consulting investigate the indoor air quality of mall spaces where tenants were complaining of gasoline-like odors and headaches. One tenant had terminated his lease and vacated his space. 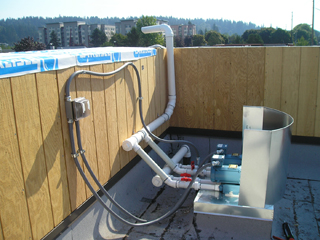 Initial inspection of the mall and adjacent properties found a documented fuel spill from an underground storage tank at an adjacent gas station. However, soil and groundwater samples did not indicate that fuel contamination extended onto the mall property.

Was it possible that the fuel spill at the gas station was causing indoor air problems on an adjacent property?

When released to the subsurface, volatile organic compounds such as those that make up gasoline evaporate into soil pores as vapors. These contaminant vapors can migrate in the soil well beyond the source of a spill.

Farallon installed sub-slab probes at the mall property to collect soil vapor samples from beneath the building for petroleum hydrocarbon analysis. The results indicated that petroleum vapors from the gas spill at the service station had migrated onto the mall property and were being drawn into the mall building. These vapors included such toxic compounds as benzene, a known carcinogen.

The mall building was constructed as a slab-on-grade structure. The construction joints in the concrete slab floor and numerous slab penetrations to accommodate utilities in the tenant units were providing a pathway for intruding vapors. 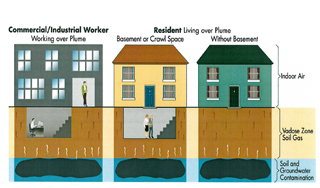 A detailed analysis of the situation revealed that subsurface vapors were being drawn into the building on windy days because of the location of doors and windows on the side opposite the prevailing wind. With the only openings to the interior on the downwind side of the building, negative pressure was created inside on windy days, drawing gas vapors from the soil.

The simple solution for the mall owner was installation of an SSDS, a proven and highly reliable method of eliminating vapor intrusion issues. SSDSs are used across the United States to mitigate subsurface contaminant vapors and radon gas.

The contaminant-containing blower exhaust is discharged a safe distance above the building, away from heating and cooling system air intakes.

An additional action conducted along with SSDS installation is the sealing of floor penetrations and cracks.

Farallon designed and installed an SSDS at the mall that eliminated the vapor intrusion problem. Following system installation, complaints from tenants about gasoline odors and headaches ended, and measurements of indoor air contaminant concentrations demonstrated that petroleum vapors were immediately eliminated from indoor air.

The SSDS continues to operate at the property while the adjacent gas station owner pursues cleanup of the fuel spill. 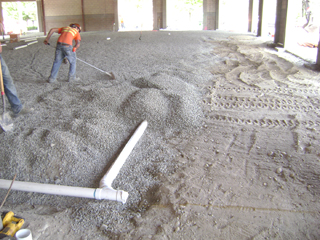 [enlarge]
At this new building, workers install vapor-collection piping beneath the floor slab.

An SSDS is relatively easy to install and operate. System design begins with testing to assess the amount of vacuum required to reduce pressure beneath the floor slab. Testing results are used to determine the number and locations of vent pipes and to size the ventilation blowers(s).

In addition to being highly effective, SSDSs are inexpensive to design, install and operate. Installation costs generally range from $1 to $5 per square foot of building floor space. The only system operating cost is the electrical power required to operate the blowers — typically $20 to $100 per month.

If you are facing a potential vapor intrusion issue, an SSDS may be your solution. These systems are an inexpensive, reliable means to safeguard the quality of indoor air and eliminate the liability associated with indoor air quality issues caused by subsurface contamination.