Onslow
The slumping economy has taken its toll on most every Seattle business, including developers, builders and many other commercial real estate organizations.

For the past several years, development has slowed to a trickle due largely to diminishing demand for newly built office space and fewer residents purchasing and leasing single- and multifamily homes, respectively. Revised underwriting criteria at banks have also contributed to the lack of development. Lenders are now imposing more guarantees from developers, reducing their overall contributions, and protracting the overall loan-approval process.

These negative market trends, while frustrating for developers, don’t necessarily mean that nothing’s getting done in terms of real estate development and community enhancements. In fact, it seems as though the recession has recently spurred a higher-than-usual level of collaboration and creativity among developers, cities, neighborhood groups and other stakeholders responsible for making these projects a reality.

To that end, there are numerous examples of how this renewed entrepreneurial spirit has helped to create development opportunities in Seattle’s urban neighborhoods, and turned these areas into more dynamic places to live despite the lagging economy. 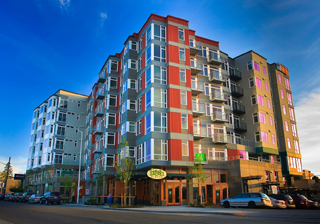 Photo courtesy of Harbor Properties [enlarge]
Harbor Properties was able to develop the 136-unit Mural Apartments in West Seattle after intense collaboration with neighborhood stakeholders, including the YMCA.

Examples include but are not limited to the following:

• The city of Seattle’s Multi-Family Tax Exemption has been instrumental in helping developers bring to market a wide range of residential product — particularly projects that include workforce-housing that is affordable to moderate-income renters such as teachers, military, administrative assistants and others.

Harbor Properties leveraged the creative local-government program to develop two mixed-use projects in the West Seattle neighborhood: Mural Apartments, completed last year, and Link Apartments, which broke ground this winter. The program was critical to Harbor’s ability to deliver on a combined 330 market-rate apartments geared to individuals, couples and families who want to live closer to downtown and minimize their carbon footprints through greater access to mass-transit, employment and a range of daily goods and services.

• The city recently helped fund a study of the West Seattle Triangle, and how underused parcels in the neighborhood can be maximized for the benefit of existing and future businesses, residents and neighborhood organizations. The city is working with landowners and other community stakeholders, like the West Seattle Chamber and the West Seattle YMCA, to create a long-term plan to stimulate economic activity in the area by helping support small businesses while it attracts new investment.

The plan also seeks to create a more dynamic, pedestrian-friendly Triangle neighborhood with a diversity of housing, retail and public open space.

A recent cooperative effort between the Seattle Parks Foundation, the city of Seattle, and individuals and private businesses led to successful funding of the redevelopment of Lake Union Park. The urban waterfront park represents a prime, centrally located urban parcel that has been acquired by the city over the past two decades.

A Parks levy provided some $5 million for planning, design and limited construction for the multi-phased project. The remaining project funds, about $25 million, were covered by a massive capital campaign led by the Seattle Parks Foundation, which solicited donations from both public and private contributors during one of the region’s most challenging economies on record.

The result of these entrepreneurial efforts is a stunning 12-acre park that will include public green space and several built facilities that “connect Seattle’s neighborhoods and celebrate the cultural, industrial, and maritime heritage of the city and the region,” according to the city’s website. Work is slated for completion later this year.

In many respects, the latest economic downturn has prompted a response by public- and private-sector decision makers similar to the down-cycles of yesteryear.

The process goes something like this: The market crashes, businesses pull back on spending, hiring and development comes to a standstill, and then everyone waits for things to improve. As the market’s recovery invariably comes slower than hoped, individuals and groups begin an intensive collaboration period to create solutions for improving Seattle communities through economic- and community-based development.

What’s most important about this process is not that it brings out the best in the business, governmental and nonprofit communities during uncertain economic times, or that these collaborative efforts have brought forth a number of urban development projects helping to continue Seattle’s progression into a world-class city. Rather, it’s imperative we find a way of maintaining this creative energy during real estate and economic up-cycles.

The following are several “lessons learned” from the past few years that hopefully will guide further cooperation between all community stakeholders for decades to come:

• Working together helps to overcome challenges, despite the additional time and resources it sometimes can require.

During thriving economic times, it’s tempting for businesses and governments alike to pull back on communicating new-and-improved ways of developing financially feasible projects that serve tenants and raise overall quality of life.

Maintaining that focus when the economy is thriving will ultimately benefit stakeholders of all types and backgrounds.

• Collaborating with nonprofit and business organizations — such as the Urban Land Institute, Great City, Downtown Seattle Association, Cascade Land Conservancy, the YMCA and Chambers of Commerce — can render fresh new ideas and take any community-enhancement project to the next level. 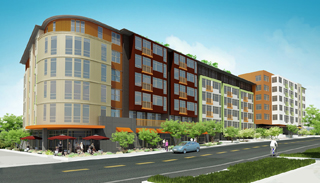 • Saving finances and other resources from economic booms will help pave the way for projects that need support but cannot be executed when funding is scarce. It’s a lesson that’s easy to aspire to but difficult to follow, even today when there’s opportunity to leverage lower costs of goods and services.

• Making further revisions to the city’s zoning and land-use code, in addition to its design-review and entitlement processes, will help move worthy projects through the public-approval stage and to market where they can begin bringing promised value to these communities.

• Finding a creative solution to code-mandated parking in neighborhoods where mass-transit options are being developed. For instance, in West Seattle — which will enjoy Metro Transit’s new streamlined RapidRide bus service to downtown Seattle beginning in 2012 — new-development parking requirements haven’t changed since the bus rapid transit service was announced, despite the fact that RapidRide will significantly lessen the need for car ownership.

One potential strategy, which would help lower costs of housing, is to locate some resident parking off site and then eliminate that parking once the new mass-transit service comes online.

• Considering transitional uses of existing buildings to help support start-up businesses and keep properties from deteriorating is something that’s been discussed for years. But certain city code requirements make this strategy a challenge for developers to execute.