Homebuyers look outside the urban core

Developing a viable city with livable communities requires a vision based on the needs of a broad range of populations for today and into the future. Stakeholders throughout Seattle have been working to address that challenge while facing the reality of having limited physical space to grow.

Residential builders must look at how to develop communities that connect residents with amenities they need in a smart, sustainable way. At Bennett Homes, this means discovering areas that were once considered outside the urban core and making them part of a larger transformation.

South Seattle represents a collection of urban neighborhoods undergoing a significant renaissance. This transformation involves creating access to affordable housing within the city, and is especially visible among a concentration of residential construction projects alongside Sound Transit’s Link light rail. Importantly, these neighborhoods also represent some of the few remaining areas within Seattle where developable land is available. 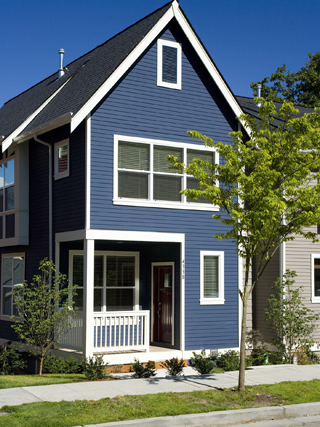 Prospective homebuyers are attracted to the area because of collective improvements — from safer streets to new commercial development and a growing sense of “place.”

We have experienced robust home sales in this area, and have been very strategic in order to realize this success.

Our strategy meant first considering the viability of the area, specifically the Rainier Vista community, which is located along Martin Luther King Jr. Way parallel to the light-rail line where we have been building homes. With the coming of this mass transit option, MLK Jr. Way has experienced a significant transformation that connects it to the rest of the city via light rail. New construction quickly followed.

Other factors also played an important role in our decision to invest in this area. Columbia City over the past decade has grown into a vibrant neighborhood with restaurants, shops and a cinema, and provides a much-needed community hub. Also, the Seattle Housing Authority made a significant commitment by developing a master plan, purchasing land and then selling it to developers with the promise to create affordable communities.

Secondly, we had to consider how we would build homes — and a community — that appeal to the diverse types of buyers in Rainier Vista.

We considered several important factors before moving ahead with new residential developments in Rainier Vista. Seattle’s south end is one of the most ethnically diverse in the country. It is also an area where younger homebuyers and young families are moving, regardless of ethnic background. To meet the demands of homebuyers in Rainier Vista and other South Seattle neighborhoods where we build or plan to build, we needed to understand their priorities.

We learned that the most sought after benefits include: affordability, flexibility and choice (in terms of the kinds of home designs and floor plans available), quality construction, access to transit, and sustainable design and construction.

Another important factor to consider was how families would use our homes based on their differing lifestyles. For example, some families from Middle-Eastern and Asian cultures often expressed a need for multi-generational homes. These homes accommodate additional relatives — often a grandparent — who would help with childcare. This meant designing flexible spaces where a den, for example, could be converted into a bedroom, or a great room could be redesigned to open into a dining room to create a less formal, larger dining or family area.

We also had to take into account the physical appeal of the homes, understanding that today’s homebuyers expect strong architectural detail and high-quality construction. We built our homes at Rainier Vista with features such as front porches, which contribute to the home’s aesthetic appeal and a sense of community. We also built our homes to be environmentally savvy and energy efficient, each Built Green certified.

Our strategy proved successful and ultimately we built and sold all 40 single-family homes (between Othello Station and Rainier Vista) and 44 Heritage townhomes.

We have a new phase of single-family homes and townhomes under construction in South Seattle, with several pre-sold.

Beyond selling homes, Bennett is proud to be part of the revitalization of South Seattle. Ultimately, the new development we created had to fit in with the existing neighborhood rather than the other way around. This is key in urban development; it helps ensure that the history and charm of the neighborhood remains and gives us the opportunity to expand Seattle’s sense of place while contributing to a vibrant future for the city.

Paul Glosniak is the executive vice president of Bennett Homes and has been with the company since 1991. During his tenure he has been directly responsible for many of the company’s home designs that have been integral to the company’s success.