Parks and boulevards for the next 100 years

Copeland
Parks and open spaces are an integral part of the experience and quality of living in Seattle. The integration of nature with our lives in our urban environment is a biological necessity contributing to our healthy well being.

From Greek and Etruscan times to the present, planners have included parks and open spaces as key ingredients for vital cities. Our new Olympic Sculpture Park and Millennium Park in Chicago are two outstanding 21st century examples of the continuing realization of this need and desire.

In 1902, civic leaders demonstrated their desire to make Seattle a beautiful city by hiring an expert “who would arrange the plans for parks and boulevards that all work would be done in harmony with that scheme, whether done now or a hundred years from now” and “to answer the needs of a city of a half-million people.” 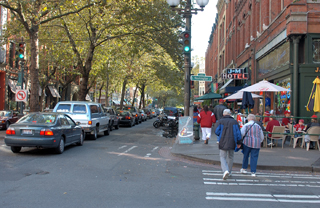 Landscape architects, the Olmsted Brothers, designed a park and boulevard plan for Seattle as described in a 1903 Report on Parks, Parkways and Playgrounds and a 1908 Report for Newly Annexed Areas, which have had an immensely positive impact on the environment and development of Seattle, ranging from West Seattle to Lake Washington, the University of Washington and Magnolia. The plans, most of which have been implemented, included existing and new parks and beautiful boulevards such as Lake Washington Boulevard, Mount Baker Boulevard and Magnolia Boulevard, which connect and extend a sense of the parks into the neighboring communities.

The question in today’s generation is: How can we carry out parks and open-space planning in a way that honors the solid foundation set by the Olmsted Brothers, but considers the needs of Seattleites 100 years from today?

Though the Olmsted Brothers’ reports reference several parks within the central downtown, South Lake Union, Pioneer Square and Belltown neighborhoods, these sites were relatively small in comparison to the large tracts of land proposed for parks just outside the central core — and probably for good reason. Commerce, port activity, re-grading and industry dominated these areas, which then contained little residential or community activity. 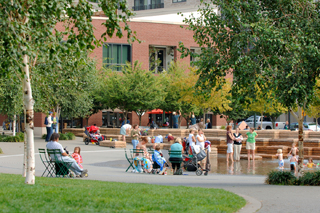 Photo by Juan Hernandez/Mithun [enlarge]
Jamison Park in Portland’s Pearl District, a neighborhood similar to Seattle’s Belltown, is an example of how the Bell Street Dog Park could be expanded and redesigned to include new commercial development.

Today, these areas include significant and growing communities of residents, businesses and visitors — yet do not serve the neighborhood with a network of open spaces and/or truly pedestrian-supportive boulevards.

The time has come to seize the opportunity to create a framework of open spaces and boulevards in Seattle’s center city in order to connect to and build upon the beautiful lineage initiated in the early 20th century.

The following are a few ideas, not meant to be all-inclusive, but rather representative of some opportunities where we can provide open space, parks and boulevards within Seattle’s central areas:

• The central waterfront will be completely transformed with the removal of the viaduct. As the threshold to Seattle, it will become a significant urban open space supportive of pedestrians, bicycles and local vehicular and bus access. Creating green connections into downtown, Pike Place Market, and north and south from the Olympic Sculpture Park to boulevards leading all the way to Alki should be a top priority.

• Westlake Avenue should become a significant boulevard connecting to the new South Lake Union Park and Burke-Gilman bicycle trail around Lake Union, and to a new park at the southern terminus of Westlake Avenue at the intersection of Sixth Avenue, Olive Way and Stewart Street. 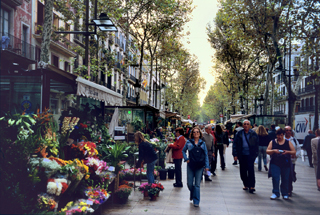 Photo by Lee Copeland/Mithun [enlarge]
Third Avenue in Belltown could take a cue from Las Ramblas in Barcelona, Spain, by adding a park in the center and reconfiguring traffic to one lane in each direction.

• Third Avenue in Belltown, from Denny Way to Stewart, could be developed as a boulevard in the spirit of Barcelona’s Las Ramblas. The avenue right of way is currently 96 feet wide; when redeveloped, Third Avenue could have 8-foot-wide sidewalks, parking and bus stops with one lane of traffic each direction, and a 40-foot-wide park in the center for pedestrians to rest, play and dine in outdoor restaurants.

• Bell Street Dog Park could be enlarged by expanding it west to Second Avenue and south with new commercial development opening onto the park. A successful example in a similar community is the family-friendly Jamison Park in Portland’s Pearl District. 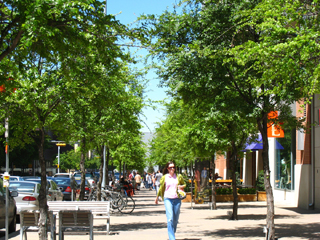 Photo by Bruce Kinnan/Mithun [enlarge]
Westlake Avenue could be changed to resemble this streetscape in Austin, Texas.

• Bell Street is being improved as a pedestrian-oriented street with significant park space. These improvements — the Bell Street Park Boulevard project — should extend to the waterfront, Denny Park and Westlake, and perhaps include a monorail stop at Fifth Avenue and Wall Street.

• First Avenue in Belltown, between Denny and Stewart, should be developed as a boulevard similar to First Avenue between Cherry and King streets in Pioneer Square, including trees on the perimeter and in street medians.

These ideas are proposed to stimulate interest — and hopefully, many more ideas. We must not only honor, but advance the creative visions our civic leaders initiated more than 100 years ago. This is a responsibility not only of our present and future leaders, but one that we in the design and development community must carry forward with joy and determination as we shape the future of Seattle.