For more than 80 years — until the end of last summer — two terra cotta-clad structures anchored the northwest corner of Westlake Avenue North and Mercer Street. Their eye-catching details and continuous use as auto showrooms made them “landmarks” in the colloquial sense well before they were formally designated as a Seattle Landmark in April of 2006.

Developed in the early 1920s as part of the “auto row” along Westlake, the buildings were constructed for William O. McKay, a graduate of Broadway High School and the University of Washington, who worked his way from auto mechanic to Ford dealer. In 1922, he had the two-story mid-block building, now known as the Ford McKay Building, constructed. It was designed by Warren H. Milner & Co.

Three years later, McKay was doing well with his Ford dealership, and the Ford Motor Co. acquired the Lincoln Motor Co. For this luxury brand, McKay had a second showroom constructed adjacent to his first, this time a tall single-story building at the corner of Westlake and Mercer. 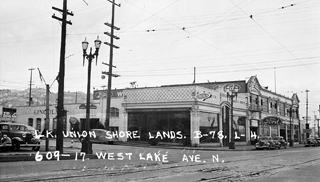 Photo courtesy of Puget Sound Regional Archives [enlarge]
The Ford McKay and Pacific McKay buildings both were clad in terra cotta, as seen in this 1937 tax record photo.

For the second building, McKay and architects Harlan Thomas and Clyde Grainger went all-out. The result was striking: large plate-glass windows framed by ornately detailed terra cotta showcased not only the fancy cars but also the showroom itself. The interior space was designed to evoke the feeling of a Mediterranean courtyard, with decorative plaster pilasters around the perimeter of the room “supporting” a classical entablature and barrel vault-shaped ceiling, a central mezzanine stair with terra cotta fountain, leaded glass mezzanine windows with planter boxes below, and terrazzo and marble flooring.

Fast-forward 75 years to the “Mercer Mess” and the rapidly changing neighborhood of South Lake Union. The McKay dealership had remained in the family for three generations and operated into the 21st century. But times were changing, and they sold the property to Vulcan in 2004 and moved out a year later.

People began to wonder what might become of the buildings, particularly because the Pacific McKay Building was separating from the neighboring Ford McKay Building, settling and listing to the south. In 2005, the Washington Trust for Historic Preservation put both buildings on its Most Endangered Historic Properties List.

At the same time, the owner was pursuing local landmark designation. Though the properties were designated in 2006 — with controlled features including the exteriors of both buildings as well as the Pacific McKay Building’s interior showroom space — this did nothing to address the issue of settlement or the potential for an expanded Mercer Street to take out the southern 67 feet of the block.

The conclusion was that the Pacific McKay Building appeared to be still settling; that unstable soils, heavy concrete building frames, and the brittle nature of terra cotta ruled out a physical move of the structures; and that the best way to preserve the architecturally significant elements of the buildings was to salvage and store them, for reinstallation on a new structural frame.

The owner also brought on NBBJ to develop a design for new construction on the smaller block that would result from the proposed Mercer widening.

Everything had to fit together because the new structure for the salvaged building elements would be part of a larger building. How would it relate to the landmark? Juxtaposition of old and new, particularly where zoning allows for buildings much larger than those already populating a neighborhood (as has been the case in South Lake Union), is often awkward. 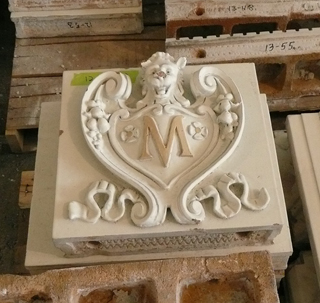 Photo courtesy of BOLA Architecture + Planning [enlarge]
Terra cotta details like this one were removed, cataloged and put into storage.

Seattle Landmarks Preservation Board approval was required for any changes to the building exteriors or the Pacific McKay showroom, so the plan for salvage, storage and reinstallation of historic elements had to be approved, as did the interaction between these elements and the proposed full-block development. In early 2009, the board granted conceptual approval.

It seems strange to use the term “construction administration” for the salvage and demolition project, which began in July of 2009.

The team painstakingly documented, salvaged, cleaned, repaired, numbered, packaged and stored the historic elements of the two buildings. This included not only the exterior terra cotta of both buildings but also the stone base, carved wood window frame, and leaded glass window sash of the Pacific McKay exterior; the leaded, glazed interior doors and windows, central stair elements, marble base and terra cotta fountain of the Pacific McKay showroom; and the large wood transom bands and terrazzo entry slab of the Ford McKay Building.

Decorative plaster elements were measured, molded and cast; and samples were taken of the terrazzo and marble flooring. All of these steps will enable accurate reconstruction of the elements that were not salvageable.

The deconstruction of a building is a fascinating process. A piece of terra cotta does not look the same at eye level as it did hanging 15 feet above the sidewalk on the building façade. Even the gentle cleaning of the terra cotta, done prior to beginning the labeling and removal, revealed colors and aspects that had been obscured by decades of grime. 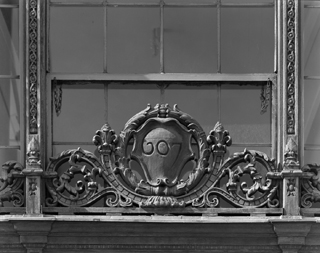 Photo by Brian Allen [enlarge]
Crews saved the carved wood header that was in the window above the main entry of Pacific McKay Building.

Historic buildings yield many surprises. One mystery in the Pacific McKay showroom was the terra cotta fountain, which had been coated at some time. Ultimately, the fountain morphed from garish to muted, and a stamp on the back of the tiles revealed them to be made by Batchelder.

In an unusual progression, the buildings had to come down in order to be saved. It is unclear when the salvaged elements will go back up, given the timeline of the Mercer Corridor project, the potential for more zoning changes in the neighborhood and the sagging economy. But there is no question that, tucked as they are so carefully in their numbered crates, the McKay buildings are ready to rise again, reclaiming their position of honor at the corner of Westlake and Mercer.

Sonja Sokol Fürész is an associate and preservation planner at BOLA Architecture + Planning, a Seattle-based firm with a focus on historic preservation. She worked on the McKay project beginning with the landmark nomination in 2005 and through construction administration for the salvage and demolition phase in 2009.