Full steam ahead for apartments in South Lake Union

It was late on a Friday night in Belltown, much too late for me. I was several rounds of drinks deep with the illuminati of cool — young, upwardly mobile late 20-somethings yammering on about all that is important to our newest generation of trendsetters. As the evening drew on, the topic turned to the following day’s apartment search.

Belltown was losing its luster, they claimed — it was fall 2008 after all. The new direction of the conversation was interesting enough to keep me at the bar, yet the mention of South Lake Union caused me to perk-up, lean forward and fire back with a litany of questions. “South Lake Union?” I asked. Really? Where, I wondered. What property? And most saliently … why?

My research often traverses the empirical to the anecdotal, and it is this latter vein that interested me most about South Lake Union. How did a neighborhood emerge out of almost nothingness and achieve status so quickly?

Having spent my post-college years in San Francisco, I am well versed in the common migratory patterns of urban 20- and 30-somethings. They graduate from one neighborhood to the next, with each change incrementally ratcheting up the evolutionary chain of maturity evidenced by the chosen neighborhood.

In San Francisco, we moved from the Marina to Pacific Heights, or from the Mission to Nob Hill. For years young Seattleites served time in their early 20s in Belltown, eventually tiring of the “scene” and advancing to Upper Queen Anne or Greenlake. 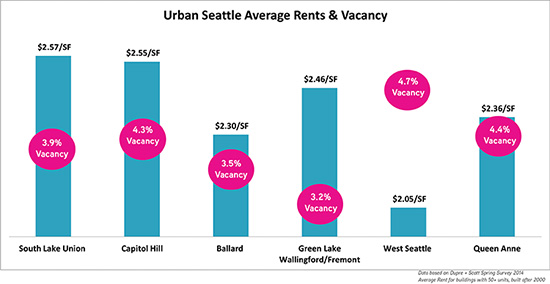 Although Vulcan was a predominant force in the early residential development of South Lake Union, it wasn’t the first and certainly wasn’t the only major developer. Westview Development presciently developed Mercer View as early as 2002 and the then-powerful Opus Northwest completed Dexter Apartments, a 201-unit apartment complex, in 2003.

The key window of residential development is clearly the last decade. With a scant stock of modern apartment buildings existing in South Lake Union as recently as 2003, the market grew to nearly 3,300 units from 2004 to 2014. For the sake of comparison, South Lake Union has now outpaced Ballard, which had more than 1,000 apartment units as early as 1996.

The development cycle continues to gain steam. Looking beyond 2014, more than 5,710 residential units are planned for South Lake Union. If built, the total unit count in South Lake Union will be roughly equal to all existing and planned units in both Ballard and West Seattle combined.

Currently, buyers can expect to see pricing in the $350 to $500 per square foot range, with a heavy dependency on zoning, which changed markedly with the City Council’s approval of the South Lake Union rezone in May 2013.

Land pricing on a per-unit basis has become a less reliable metric. The market has witnessed relatively recent sales of entitled sites in the $60,000 to $80,000 per unit range, all the way up to high-watermark pricing paid by McFarlane Partners for an unentitled site at more than $70,000 per unit.

The history of sales of existing apartment buildings in South Lake Union is surprisingly uninteresting. Despite the investment community’s voracious appetite in 2012/2013 for urban apartments, both pre-sale and existing buildings, South Lake Union has experienced very few sales. You can count them on two fingers: Cairns in 2007 and Annalise in 2013, both purchased by Essex Property Trust.

As of March 2013, according to Dupre + Scott, the average rental unit in South Lake Union will cost you $1,936 a month. When focused on 2010 and newer buildings, average rents climb to $2,036/unit and a two-bedroom unit will cost you an average of $2,791. Pretty impressive numbers for an area of town where industrial users were paying less than 60 cents a square foot just a decade ago.

South Lake Union has made great progress in its metamorphosis from an industrial center at the edge of downtown Seattle to a residential destination of choice. As far as remaining industrial uses go, few remain. The sole car dealership is the tony Tesla showroom, a far cry from the former Ford Model T assembly plant repurposed to Public Storage. Development of the Troy Blocks — a former industrial laundry — began this year. Keep an eye out for further transformation and residential appeal; I have a strong sense that the excitement is just beginning.

Dylan Simon is an investment sales broker in Colliers International’s Seattle office. He specializes in the sale of apartment buildings and development land with a focus on urban strategies.