Bringing nature home in the city

Adding housing to accommodate 70,000 new residents within Seattle’s city limits over the next 20 years will be a major force that shapes our public space. Carving out a great public realm while adding this much density will require creative solutions from designers, developers and planners as new housing projects rise block after block, particularly in South Lake Union.

Recently, our firm teamed with the Runberg Architecture Group to design most of a half-block at Eighth and Republican in South Lake Union for developer The Wolff Co. There will be new space for the family-run Glazer’s Camera showroom and offices, a small neighborhood cafe and 211 housing units along Eighth Avenue — a block identified in the South Lake Union Street Concept Plans as a future green street “woonerf” with a focus on pedestrian-oriented residential development that extends south to Denny Park.

From the start, it’s been the exterior space formed by the building that has been at the heart of our design approach.

As our team carefully shaped the eight-story building, we turned to the natural surroundings of the Pacific Northwest for inspiration. We deformed the building’s bulk at the scale of the entire block to form a generous outdoor neighborhood green space, with the building receding into the background. Conceptually, the building forms a backdrop for the green pocket similar to the way the Cascades rise up behind green foothills. 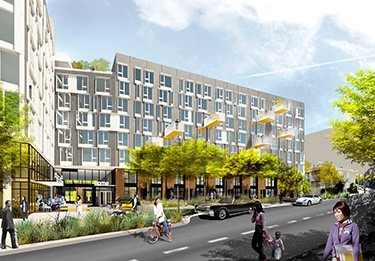 Image by The Miller Hull Partnership [enlarge]
The building is set diagonally to the street to create a front and back yard.

In this way, the building skin was treated as a textured but sheer wall bent to form exterior space that could be exploited by residential balconies reaching far out into the space, without crossing the property line. Rather than turn to an expression of aligned and regularly spaced protruding bays as is typical of these housing blocks, we arranged the facade elements using a non-orthogonal order more attuned to the organic rhythms of nature.

We drew inspiration from geological forms, barnacle colonies and rock quarries as we established a language for the taut skin of the building.

In his fall 2013 Seattle Times article calling for imaginative solutions to density, Lawrence Cheek pointed out that “skewing a building off the grid breaks down its visual mass and creates interesting open space.” As the green space became integral to the concept of the project, we knew we needed our landscape architects from Hewitt to play a prominent role from the start, for the project to be successful.

The result is a building that recedes to form a backdrop for a large bio-retention rain garden planted with honey locust and Aspen trees, crossed by an elevated walkway coined the Mega Stoop. This large green pocket space provides a scenic view from the sidewalk, as well as from a south-facing terrace that extends from the cafe to float above a matrix of stepping stones through a shallow pool of water. 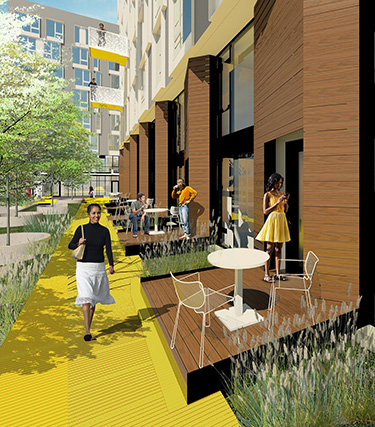 Image by The Miller Hull Partnership [enlarge]
A large rain garden traversed by an elevated walkway serves as a green buffer from the street.

Seattle is a city known for its distinctive single-family neighborhoods. As more multifamily product comes online to address the need for greater density, our team was challenged by the developer to find a way to retain some of the advantages of single-family residences. Carving out large outdoor spaces within the block by arranging the building diagonally resulted in a front and backyard. On the alley side, this resulting space accommodates what is known as the Work Yard, a place where residents can walk their dogs, work on bikes, store kayaks and kick back — all the activities enjoyed in a detached single-family house.

Up on the roof, a sunset deck cascades a full story with terraced wood seating looking out over the green space below to the west and the Space Needle.

Construction is expected to start in June, with Exxel Pacific as the general contractor. Wolff wants to open the project in December 2015.

As Seattle continues rapidly toward greater density, designers working in the realm of multifamily housing need to begin to develop new vocabulary for creating experientially rich public and private spaces that will define our city in the decades to come.

While the financial realities of such projects may often limit the palette of materials and forms available to designers and can lead to banal environments, we can zoom out to innovate at the scale of the block to overcome these limitations. The resultant dynamic public realm not only gives something back to the neighborhood but can increase desirability to better attract tenants. Approaching this mixed-use project as an opportunity to create generative public space has made working at the forefront of Seattle’s push for more density and city living a meaningful endeavor.

Mike Jobes, principal with The Miller Hull Partnership, is the lead designer/principal-in-charge for the Eighth & Republican mixed-use project.