As it sits today, the South Lake Union office market is not only the big man on campus, but the homecoming king, valedictorian, and student body president all in one. It is popular, and developers and office tenants can’t seem to get enough of Seattle’s most vibrant neighborhood.

The name “South Lake Union” seems to be so desirable that office projects in the traditional Denny Triangle and Cascade neighborhoods now bill themselves as South Lake Union options, proving that imitation is the sincerest form of flattery in the development world as well.

For most, the epicenter of the South Lake Union office market is actually a place where you can get a great burger: Tom Douglas’ Brave Horse Tavern. Not by mistake, that general location is also the epicenter of Amazon’s ever-growing footprint in Seattle.

Do you remember in 2007 when Amazon announced its plans for Vulcan to develop an 11-building campus covering 1.7 million square feet? At the time, it seemed like Jeff Bezos and company may be biting off more than they could chew, but in reality, it was just the appetizer. The Amazon footprint now covers more than 20 buildings and 5.3 million square feet of office space in either existing buildings, or projects that are under construction. 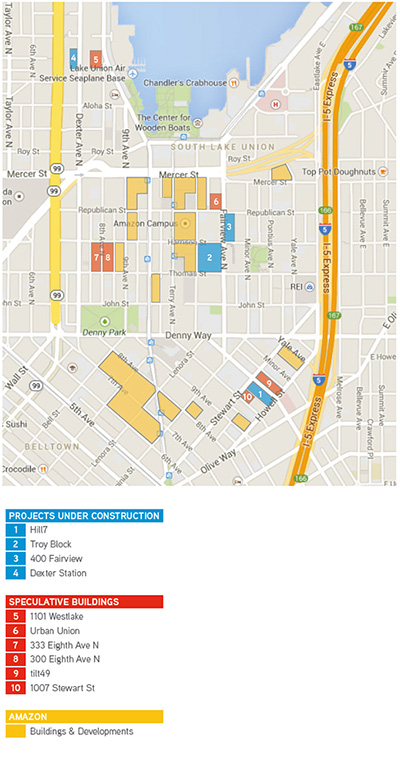 Included in that total is the 1.1 million-square-foot high-rise tower that Amazon is building at Westlake and Lenora that is expected to be completed in late 2015. Not included in that 5.3 million square feet is an additional two blocks that are in the Amazon development pipeline, where the company will likely build an additional 2.2 million square feet from 2016 to 2018, plus a fourth city bock that would allow for even more expansion.

The three-building development (owned by Amazon after purchasing the land from the Clise family) will be similar to having three Two Union Square buildings aligned next each other. If Amazon’s need for space was to stop there, the company would own or lease 7.5 million square feet in South Lake Union, which would justify another two or three Brave Horse taverns to be added to the mix.

As a result of Amazon’s appetite for office space, the South Lake Union Class-A vacancy rate has dropped to a staggering 1.6 percent. Not surprisingly, office developers are quickly looking to fill the void with new projects.

There are four speculative buildings under construction in the “greater” Lake Union area totaling just over 1 million square feet. Hill7 and Troy Block (both by Touchstone), 400 Fairview (Skanska) and Dexter Station (Capstone Partners) have all broken ground and will be delivered to the market from late 2014 to early 2016.

But that’s not all.

While all of these projects may not be delivered in this development cycle, many expect the bulk of these buildings to rise up over the next three years.

The demand for new projects also produces its share of challenges, namely congestion. Just how are all of these new employees getting to and from work? The vast amount of new multifamily developments in Lake Union, Belltown and Capitol Hill will provide easy access for those that choose to live close by, but there will still be a significant increase in car traffic over the next four years. Proximity to Interstate 5 and mass transit options will be a key component for future development, as well as continued funding for King County Metro service. Many of these buildings will be filled by technology tenants with a workforce that not only relies on mass transit, but demands it.

Another challenge is simply the cost of new construction. Land values have never been higher as developers of both multifamily and office buildings battle for control of the most desired development opportunities. This means that the rental rate for new construction buildings will be higher than some tenants can afford, leaving some companies priced out of the popular sub-market.

However, the competition to recruit and retain tech talent is fierce, and providing a high-quality work environment that is surrounded by rich amenities (think coffee, great food, hip bars, gyms, street car and dog parks) will continue to drive tenants into the ever popular area.

In the last development cycle, there’s no denying that Amazon changed the landscape in South Lake Union. The difference in the current development cycle is that the South Lake Union vision has been completed. Now, other tenants will have the opportunity to enjoy the vast amenity base and infrastructure that has been created over the last seven years.

With Amazon controlling its own land, many of the new developments will be filled with other tech tenants looking to build their own empires. No one should be surprised; as we all know there are plenty of others that want to be just like the big man on campus.