With increasing competition and changing market tastes, developers and designers in South Lake Union are participating in the rapid evolution of the traditional urban apartment community.

It’s no secret that Seattle is in the midst of its largest apartment boom. Following years of little or no multifamily product being delivered due to the recession, today pent-up demand is coming from prospective residents and investors, strong local growth in the high-tech and biotech sectors, and of course the announcement of Amazon’s massive new downtown campus.

The result is a surge of permit and investment activity as developers step up to build thousands of new units in downtown Seattle and South Lake Union. Between now and 2017, more than 3,400 units are slated for delivery in the SLU submarket.

A challenge for developers building in SLU will be to differentiate their projects from each other, as well as from the slew of apartments being built in outlying neighborhoods such as Capitol Hill and Ballard. In many cases these new apartments are vying for that key demographic — the mid-20 to mid-30s techies who are willing to pay rent of $3 per square foot for new product.

Those of us in the design and development industry are witnessing and participating in the rapid evolution of the urban apartment. Unit finishes that until recently were used only in condos have now become standard in many apartments, and the variety of on-site amenities has become extremely diverse. In terms of unit finishes, the influx of materials sourced in China has made quartz countertops, tile backsplashes and luxury vinyl plank flooring more affordable, while the variety of options has made kitchen and bathroom specs much more stylish than they were just a few years ago.

The traditional studio has largely been replaced by the “urban one-bedroom” unit, with a fully separated sleeping area and a size that typically ranges from 525 to 575 square feet. Dining rooms have become much smaller (or are gone altogether) in response to smaller households and a preference for grab-and-go options rather than cooking.

A notable change in the evolution of apartments in South Lake Union and downtown Seattle is the design and quality of the lobby, amenities and common areas. Slick, modern fireplaces, stone veneer, reclaimed wood, graphic wall coverings, site-specific artwork and interactive video systems are all changing the face of the new common areas. 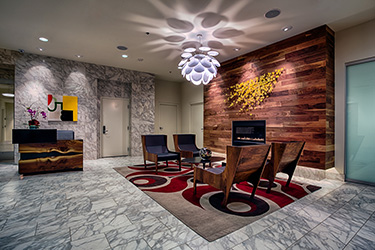 Photo by Brent Smith [enlarge]
The Lobby of The Martin has original artwork and was inspired by boutique hotels.

To achieve a wow factor, designers are drawing inspiration from industrial warehouses, breweries, restaurants and boutique hotels. Making that first impression and creating an impactful central “memory point” is more important than ever, and can make a huge difference during the lease-up period. Remember, there is only one chance to make a first impression, and on any given day prospective tenants may be touring three or more properties.

For Robin Chell Design’s most recent high-rise project, The Martin, we worked with the client to develop a concept that captures the essence of a boutique hotel, while drawing inspiration from the adjacent Cinerama theater. To achieve the intended feel of an upscale hotel, we specified durable porcelain tile flooring that closely resembled Carrera marble. We also worked with local art curator Stacie Feinstein, who teamed with MOHAI to provide new and historical images of Seattle’s great downtown theaters.

The overall effect was a memorable lobby, and a unique concept that reinforced the project brand throughout the common areas. With some of the largest units and highest rents in the downtown/SLU submarket, the building is now more than 70 percent leased.

Reinforcing a sense of place

One of the challenges associated with so many apartments being built within such a short period is that both the architecture and interiors risk having the same look. A design approach that can help differentiate a project incorporates some sort of story or theme that conveys a sense of place.

For example, if the story or theme has something to do with historic context, the interior elements could incorporate historic or industrial elements, including found objects. If a project is in close proximity to a park or the waterfront, it could offer more on-site amenities that encourage outdoor activities. Or, if a project has a great view, then orienting the amenity spaces toward that view can be a defining feature for that building.

It’s interesting to note that over half of the renters in South Lake Union are from out of town. For developers and designers, there is an opportunity here not only to appeal to a more international tenant, but to offer them an apartment home that feels unique and authentic to South Lake Union. The good news is that South Lake Union has some key ingredients that can help tell a building’s story and capture a sense of place that can be reinforced through a project’s interiors and amenities.

Several new apartment projects in SLU are doing their part in telling a story by either incorporating design details or actual building elements from South Lake Union’s industrial past. Whether it’s the preservation of an entire building or salvaging wood beams, doors or bricks to be used in a new structure, SLU definitely has an industrial “grit” that is appealing to the target market, and presents an exciting opportunity from a design standpoint.

Beyond the fitness center

In addition to the lobby, the quantity, quality and diversity of onsite amenities are evolving as well. Traditional amenities such as the clubroom and fitness center are being re-designed into multipurpose spaces that accommodate a greater variety of uses, while new amenity concepts are also being developed to reflect market trends.

The SLU renter is young, active and very tech-savvy, but they also really enjoy playtime “off the grid.” These tenants tend to be quite active and interested in old-school social activities such as shuffleboard, pinball, basketball, pool and board games, and of course, enjoying a great local brew.

Media centers are also adapting in this changing market. While some apartment communities are including the more traditional theater-style format (still very popular), others are opting for a more gamer-oriented media center, often with multiple screens and state-of-the-art connections that accommodate several players.

Another noticeable change is the growing trend to move away from full-scale demonstration kitchens in clubrooms toward smaller bar-and-prep kitchens. These scaled-down kitchens are not only more cost-effective, they are in line with the tastes of the SLU renters, which tend to opt for grab-and-go food, craft beers and cocktails over the more traditional dinner gatherings. Subsequently, the formal dining table is giving way to more multipurpose communal tables or groupings of smaller tables, which encourage more informal activities.

As a hub for urban recreation and sports-oriented retailers, South Lake Union offers plenty of inspiration for indoor amenities and outdoor activities. Unique on-site fitness amenities such as basketball courts, rock climbing walls and yoga studios are starting to appear as new apartment projects step up and embrace the neighborhood vibe.

From a competitive standpoint, the design approach of telling a story, incorporating a sense of place, and developing a unique theme can help distinguish new SLU apartment projects from each other, as well as from new apartments in the other urban hotspots such as Capitol Hill, Ballard and Queen Anne. To achieve this, and ultimately to maintain a competitive edge, it is important not to take a generic approach to designing and programming the amenities in these new projects.

Taking advantage of a project’s location, incorporating interior and exterior elements that tell a story or convey a theme, and making that story relevant by presenting it in a setting that feels authentic, comfortable and hip, will help ensure the success of these new projects. Not only can new apartment buildings benefit from this approach by having a healthier lease-up, but it may also help maximize tenant retention.

Apartment interiors and amenities are rapidly evolving in South Lake Union. When the dust from this building boom finally settles, SLU could be perceived as the most attractive and compelling neighborhood in Seattle for new urban renters. In addition to benefiting developers and investors, the new residents will benefit by finding a great place to live, offering them a sense of home and providing a unique range of on-site amenities that support their active urban lifestyles.