By just about any measure, the Puget Sound region registers as the nation’s most active development market. Whether it’s the number of tower cranes dotting our skylines, or the square-footage absorbed, the frenetic nature of development in our region is unmistakable.

Yet completing projects on time and on budget has become an art form that can go unnoticed. Amid the boom, the local construction industry faces a shrinking pool of skilled craft labor, a shortage of building components, maxed-out concrete batch plants, and increasing congestion imposed by our hourglass-shaped city.

Given these constraints, building within an active urban core like Seattle’s requires a heightened level of orchestration, relationship-building and foresight.

It’s no secret that our industry faces a profound shortage of skilled craft labor. According to the 2017 Associated General Contractors of America outlook for Washington state, 51 percent of survey respondents believe worker shortages are the top concern, while 39 percent say that worker quality was the biggest concern.

The gleaming faces of the city’s newest high-rise towers offer the most telling example of how those concerns play out. Many of the subcontractor partners we call on to fabricate enclosures — glass curtain walls and window systems — are not only at capacity, but have a year-plus waiting list. 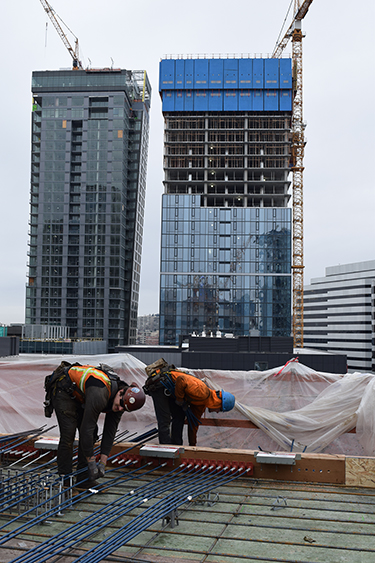 Photo from Mortenson Construction [enlarge]
Mortenson workers set up post-tension cables on the Residence Inn by Marriott project. AMLI Arc rises on the right and Kinects tower is on the left.

To fill the void, many firms find themselves recruiting skilled workers from other states and even overseas. Painters and wallpaper-hangers, too, are among the professionals whose skills are increasingly hard to come by.

As a result, cultivating strong relationships with the best of the best in the subcontractor community has become even more important, particularly when it comes to accommodating fluctuating entitlement timelines and start dates.

One of the ways Mortenson has allied itself with its preferred subcontractors is to involve them in discussions early in the planning phase of a project, rather than dictating assumed timelines and touchpoints. The result is a more engaged group of trade partners who feel invested, have been able to influence the schedule, and know the projected schedule and workforce needs well ahead of time.

To safeguard projects from craft-labor shortages, we self-perform the structural concrete, enclosure installations, shear wall and rough carpentry components on our projects.

Each deck of the upcoming 41-story AMLI Arc residential tower, nearing completion in the Denny Triangle neighborhood, necessitated hundreds of cubic yards of concrete. Getting that concrete on-site was a juggling act of its own. Local suppliers and batch plants are operating at capacity and only deliver on a cyclical basis.

To miss one cycle — by not performing the necessary legwork to be able to receive it — is to be sidelined until the next open delivery slot. This can set a project back by weeks, and by countless dollars.

Further complicating the logistics of building downtown is coordinating street closures. Permits are granted on a first-come, first-served basis, and requesting one requires working three months ahead.

Other builders aren’t the only ones vying for these permits. With the new Denny Substation expected to be energized early next year, Seattle City Light crews are excavating roads and performing trench work in South Lake Union and Denny Triangle to lay conduit in the new service area.

With all of the roadwork and frenzied construction activity in the neighborhood, many of the general contractors operating in the area meet monthly with Seattle City Light to coordinate. Close communication with other contractors also becomes necessary when operating in exceedingly close quarters.

Case in point: our recent work on the Tilt49 office building and AMLI Arc apartment tower. An 18-foot strip was all that separated our projects from that of a neighboring residential tower. Coordinating day-to-day activities with the other project team was vital, particularly with our cranes sharing air space, and with the alley serving as a key artery for deliveries.

For decades, the Denny Triangle neighborhood was best known for its patchwork of parking lots and low-rise buildings. Today, those lots are being gobbled up at breakneck pace for the development of office towers, high-rise apartment buildings and hotels. Staging areas are a rare commodity.

As a result, any material deliveries need to be made at the precise day and time that they are needed. Each day on each project site, we convene for a “plan of the day” meeting, during which the foreman lays out the day’s choreography, including delivery schedules.

For maximum efficiency amid the constraints we face, Mortenson applies lean techniques that originated in the manufacturing world. A key principal of lean is the idea of the just-in-time delivery. Mortenson teams and subcontractors alike commit to lean practices to eliminate wasted materials, time and resources.

Hospitality projects are a different type of animal. Owner-supplied finishes and furniture add another wrinkle to the process. Everything from the wall coverings to carpeting to bathroom finishes are delivered separately, often from a third-party supplier contracted directly by the owner.

And as most Seattleites can attest, increasing gridlock adds an element of unpredictability to the mix.

While building the Residence Inn by Marriott hotel at 924 Howell St. recently, we were surprised to learn that light emanating from a Mortenson logo on our tower crane had been keeping folks awake inside the upper floors of an established apartment tower nearby.

Thanks to previous outreach meetings with residents there, they knew exactly who to call (me) to take care of the issue. We took the simple step of putting the crane lights on a timer.

Relationship-building early in a project’s lifecycle can also help meet expectations later on. If we receive a noise variance from the city to begin pouring concrete at 5 a.m. one morning, we like to communicate that to hotel managers, so they can slip a note under guests’ doors ahead of time. That way, there are no surprises.

It’s one of the many ways being a good neighbor goes a long way, especially in a budding corner of a city on the rise.

Phil Greany is a construction executive with Mortenson Construction, the general contractor for downtown Seattle’s Tilt49, AMLI Arc and Residence Inn by Marriott projects, as well as the recently completed Hill7.