Affordable housing gets a boost from impact investors

Socially motivated impact investing has supported the growth of sectors such as clean energy, global economic development and sustainable agriculture for over a decade. Only very recently have we seen adaptation of this model as a source of capital to create and preserve high-quality, sustainable affordable housing in high-cost communities like those of urban King County.

Today, 76 percent of households in Seattle with incomes at or below 50 percent of the area median income ($33,600 for an individual; $48,000 for a family of four) are spending more than half of their limited incomes on housing. This kind of housing cost burden means families cannot invest in education, have no disposable income to support local business, and live under incredible stress.

Some have tried to escape escalating housing costs by moving farther from our cities’ job centers. But this escape route has become increasingly perilous. First-tier suburbs that were once considered an affordable alternative to the central city are experiencing rent increases at rates exceeding Seattle’s. Over the past two years, Renton, Tukwila and Shoreline have seen rents increase 22, 23 and 28 percent, respectively.

The social, environmental and economic return of investing in housing for lower income people in our urban centers is significant. Kids are healthier and perform much better in schools when their families are stably housed — and not forced to move frequently and farther from their communities of support to escape devastating rent increases. Workers with reasonable access to job centers, not forced to spend hours commuting, are more likely to be happy and productive employees.

Access to the innovation and energy of our urban centers is positively associated with economic mobility for poor and working class people. 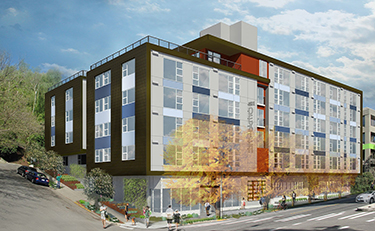 Even so, it is becoming increasingly challenging to make these types of socially minded investments in affordable housing. The cost of building all types of housing has dramatically increased in the past five years. Land costs in Seattle have almost doubled, and construction costs for multifamily housing have increased as much as 25 percent over that period. In the meantime, public resources — which provide 30-50 percent of the capital funds for a typical subsidized affordable housing development — have diminished significantly.

Federal funds, once the primary source of capital for subsidized housing production, have been severely cut in recent years. The Washington State Housing Trust Fund, funded at $200 million in 2007, is now $100 million.

Local funding offers a bright spot. Most recently, Seattle voters doubled the size of the Housing Levy from seven years ago. The King County-wide Vets, Seniors and Human Services Levy renewal will be on the ballot this fall and is proposed to triple in size.

But local backfill is insufficient to meet the need. Seattle has increased production in the past couple of years, but annual production levels are significantly less than what would be required to meet the city’s goal of producing 20,000 new affordable units by 2025.

Around the country, the nonprofit housing sector is exploring the potential of socially motivated impact investments to fill the gap left by the market and government. Some have tapped into large foundations for low-interest enterprise-level capital, providing flexibility to act quickly when opportunities to acquire land or existing units arise. But many organizations exploring impact investments have been frustrated to find that large-scale institutional investors — socially motivated or not — demand high returns not suitable for the long-term financing of rent-restricted housing. 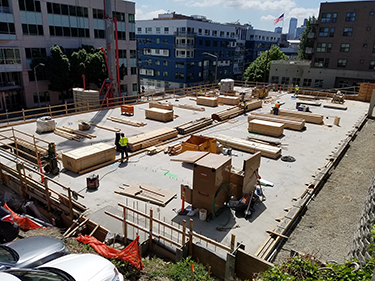 Bellwether Housing has developed a unique version of impact investing that is specifically designed to fill the gap left by diminishing public funds available for long-term financing. Its approach focuses on local, smaller scale investors: individuals, businesses and foundations deeply connected to the community, directly observing the strain of rising housing costs in their community and inspired by the opportunity to play a role in creating affordable housing.

Unlike large-scale institutional investors, these philanthropically minded investors have been motivated primarily by the impact of the investment — not the return. This allowed Bellwether to structure the investments to function much like the low-interest public debt on which these developments have been so dependent.

In 2014, Bellwether launched its first version of Seattle’s Future Fund with an offering for a modest $1.5 million to support the rehabilitation of The Parker Apartments in North Queen Anne. Investors were offered a 2 percent return for a minimum investment of $25,000 for five years. The investment would come to Bellwether as a loan, which would in turn be advanced into the development. Investors would receive quarterly interest payments and have the opportunity to re-invest at a slightly higher interest rate at maturity of the original investment.

The effort was beyond successful, attracting more interest than anticipated, with individual investments ranging from $25,000 to $250,000. Now renovated, The Parker Apartments provide 50 affordable homes for households with annual incomes between $20,000 and $50,000.

Success led Bellwether to pursue another offering in 2016 of $2 million to support the construction of Anchor Flats, a 71-unit building in South Lake Union. The building was designed by Seattle-based Runberg Architecture Group, which has expertise in affordable-housing and is known for designs that balance social, economic and environmental interests.

Bellwether successfully closed its second fund last fall and anticipates completing construction on Anchor Flats next spring. Future efforts will likely include larger developments in which efficiencies of scale will increase the impact of these private investments.

An effective response to the affordable housing and homelessness crisis we see in Seattle will require doing things differently.

Bellwether’s approach has effectively expanded the community’s capacity to respond in the face of diminished support from state and federal governments. While we must continue to advocate for renewed investments of state and federal resources, we must also recognize that it is in our interest — individually and collectively — to create communities in which people of all incomes have access to stable, affordable housing. Seattle’s Future Fund is evidence that there are many in this community who do.

Susan Boyd is the CEO of Bellwether Housing, a nonprofit developer, owner and operator of multifamily housing affordable to low-income people throughout greater Seattle.