Westbank, a Vancouver, B.C.-based firm, is developing three major projects in Seattle — 707 Terry, 1200 Stewart and 3rd and Virginia — and sees its role in this city expanding in the near future.

The company has been drawn to Seattle as both a challenge and an opportunity.

“The city’s economy is built on innovation, with companies from Boeing to Amazon fueling a robust, diversified and fast-growing economy,” said Michael Chaplin, development manager at Westbank. “We see this as a critical moment, which offers us the chance to positively impact the city’s built environment. What Westbank is hoping to bring to Seattle, is a body of work that reflects the city’s creativity and vibrancy, which will not only add artistry but contribute environmentally and culturally.”

As the practice evolves, the intent is to focus the core of Westbank’s work in a select few cities where it is believed the company can make a significant contribution.

Westbank may be better known for mixed-use office, retail and residential projects, but it has also made significant contributions to affordable housing and workforce housing in Vancouver, B.C., and Toronto, and believes it has a greater role to play in this capacity, in these cities and in Seattle, going forward.

In Seattle, Westbank intends to participate in the city’s Multifamily Tax Exemption program and is working closely with the city to incorporate affordable housing into each project, in accordance with this and other relevant city policies. 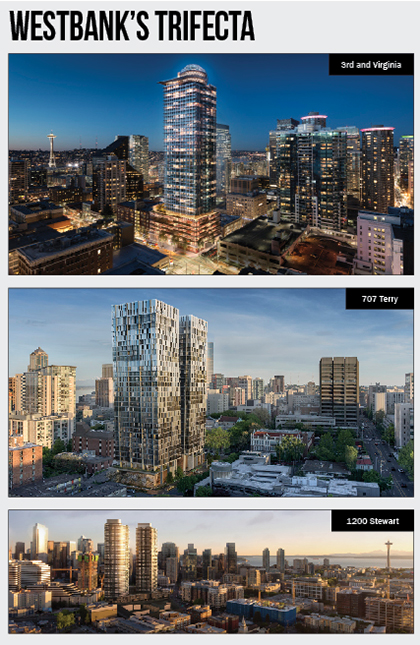 Westbank has similar experience in Vancouver, B.C., with the redevelopment of Woodward’s, working with all three-levels of government to provide 200 units of affordable housing in a project that sparked the revitalization of the city’s Downtown Eastside.

All three of the projects in Seattle will be predominantly comprised of purpose-built rental housing. With 1200 Stewart incorporating 1,051 units after opting into Housing Affordability and Livability (HALA), 3rd and Virginia with 453, also after HALA, and 707 Terry with 488 units, these three projects combined will add approximately 2,000 rental units to the city.

In Vancouver, B.C., it recently completed Telus Garden, a mixed-use office development that achieved the highest LEED score ever recorded (12 points above platinum) and uses up to 90 percent less thermal grid energy than comparable buildings.

Westbank has also long-held the belief that art is integral to the communities in which its residents live. For over two decades it has been introducing prominent public art into its projects and allowing this art to inform the design of its buildings. To date, the company has 30 installations of public art either completed or underway by some of the world’s most accomplished artists, including Zhang Huan’s “Rising” at the Shangri-La Toronto, Diana Thater’s “Light Art” at the Shaw Tower, Martin Boyce’s “Lantern” installation at Telus Garden and Rodney Graham’s “Spinning Chandelier” at Vancouver House.

A privilege to be in Seattle

According to Chaplin, Westbank considers it “a privilege to have been selected by the Frye Art Museum to develop the 707 Terry property across from the museum.” Since the Frye first opened doors in 1952, the museum has become an important cultural anchor in the First Hill Neighborhood and beyond.

The project at 707 Terry is designed to complement the neighborhood’s skyline and the adjacent St. James Cathedral. The two-tower concept embodies the theme of “creative tension” — both towers are linked via a pedestrian skybridge at the 31st level, which holds the two towers together even as they lean outward in ascension.

Designed to integrate with the Frye Art Museum building, 707 Terry’s facade is composed of a series of shoji screens, representing a canvas and woven together to create a framework. The initial pattern of the screens represents the layout of certain art work on the walls of the Frye, and as the screens are shifted, new patterns begin to emerge, creating an artful representation of urban living.

The Frye Art Museum, which provides free admission, has been a trusted advisor to Westbank, helping to ensure the project is beneficial for the neighborhood and city. Westbank’s project provides several significant contributions to the surrounding community, including increased public space, the integration of art into the design of the building, as well as underground parking..

At 1200 Stewart, the company has designed a two-tower project that reflects the balance between the surrounding urban and natural environment while adding a new landmark to the city.

1200 Stewart will be a mixed-use project comprising retail and residential with a strong affordable housing contribution achieved through the city’s HALA program. The project includes a three-story podium with retail tenants that will bring vibrancy and activity to the neighborhood and will also include a unique galleria concept to creating a visually arresting draw for the community. By extending the sidewalk area and creating a mid-block connection between Denny Way and Stewart Street, this galleria space will also provide a covered gathering place for the neighborhood year-round.

3rd and Virginia is a proposed mixed-use tower that will provide office and residential space to the neighborhood, with an office podium designed to relate to the scale of the neighboring buildings. A jeweled “veil” created by local artist John Hogan will provide a unique focal point for the project’s podium, for visitors and passerby at street-level. Above, a minimalist residential tower transitions into an iconic gesture atop the project, a spherical amenity space inspired by Buckminster Fuller’s geodesic dome. Westbank has designed the sphere atop the project in tribute to Fuller, in order to provide a distinctive termination for the project and a new landmark on the Seattle Skyline. Within the sphere, a cantilevered pool deck will offer 360-degree views of Puget Sound.

3rd and Virginia will also include an affordable housing component, through the city’s HALA program.

The core of Westbank’s mission is to create a body of work with a high degree of artistry that helps foster more equitable and beautiful cities. With these first three developments in Seattle underway, Westbank is looking to create lasting and meaningful contributions to Seattle, with more to come.

Jill Killeen is the principal of Killeen Communication Strategies, a Vancouver, B.C.-based public relations firm specializing in luxury real estate, development and hotels. Westbank is a client of the firm.