When it comes to apartments, one size doesn’t fit all

Innovation lies at the heart of Seattle. Aerospace to Outlook, cloud services to drone delivery — a DNA of innovation is a mainstay of our region’s preeminence. And it just doesn’t get any sexier than innovative types of apartment units. Right?

Given that the size, shape and dimensions of an apartment unit impacts rental rates (and the capability of increasing rates over time), concessions and occupancy, I argue it’s worth further study, and certainly innovation.

Over the last 30 years the apartment industry worked towards a continual progression of chasing market demand, and in doing so, creating efficiencies in the size of apartment units. If the average unit size in the 1980s was around 1,000 square feet, by the late 1990s the comparable unit shrunk to just under 900 square feet.

Although the stock of apartments in our region experienced little growth in the 2000s — compared to an increase of approximately 80,000 units from 1985 to 1995 — those built during this time period averaged around 800 square feet. The next development cycle, starting in the mid-2000s, produced efficient units in the mid-700-square-foot range. Post Great Recession, when dirt was once again turned and framing hammers began to swing, average unit sizes again shrunk — landing in the 625- to 675-square-foot range. 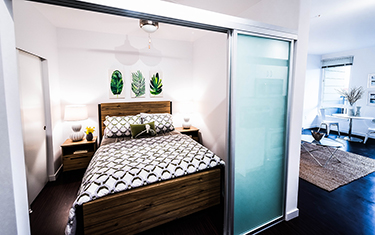 During this progression not only did average unit size shrink, the number of bedrooms per unit followed suit. Change was not for the sake of change in and of itself. Market demand pushed towards urbanization, more single-occupancy and a move from slab-on-grade “garden court” buildings to mid-rise apartment buildings on podiums.

Smaller units and the effective loss of three-bedroom units certainly are not innovations, more iterative in nature. Yet much like the technology boom we’ve experienced in the last 15 years, true innovation crept into the industry in the last 10 years with the advent of truly different unit types.

The prospect of rental rates near those of a one-bedroom and not requiring those pesky windows and doors that a “true” one-bedroom requires is an elegant solution. And surveying the national apartment market, this rare-breed of unit is as particularly Pacific Northwest as the fabled Sasquatch. While this unit type traveled far and wide to Portland and San Francisco, there is a disproportionately large number of urban one-bedroom units on Seattle rent rolls.

As of this writing, the urban one-bedroom is a bit of old news. Part of the maturation process of this innovative unit type includes the renter set growing wise to its advent and the promise of living like a true one-bedroom. As years pass and some of the luster is lost, urban one-bedrooms are finding a price niche right where they rightly belong: between that of a studio and true one-bedroom.

The urban one-bedroom remains a useful tool in the architect’s quiver — obtaining more bang for the buck in tight spaces and offering residents a tad more privacy as they maturate into that stage of adulthood necessitating a door to their bedchamber. In exchange, the pony-wall and sometimes slider-door add dollars to a rental rate what would otherwise reflect that of a studio.

Are micros just a fad?

Micro apartment units, on the other hand, are brand-new and a fad, right? Destined to go the way of the dodo bird and archaic use of a possession called a car. Not so fast.

In the timeline of innovation, micro apartments are about as old as Facebook, that brand-new startup with nearly 2 billion users. Although Facebook was founded in 2004, it really found its commercial stride around 2007, as did micro apartments.

Not only does that mean micro apartments survived — and thrived — through the Great Recession, existence for a decade certainly proves commercial and financial utility.

The use of the term “micro” (not aPodment, which is a brand like Xerox or Kleenex) finds us in a definitional wasteland. To that end, we’ve developed a lexicon for unit types short of a traditional studio unit. Enter terminology for “efficiency units.”

Arguably Seattle’s greatest contribution to the innovation of unit types over the last 30 years is the segment of the industry we term efficiency units. Encapsulated therein one finds congregate housing, micro housing, SEDUs (old and new) and EDUs. By one’s attempt to describe and define each, one is destined for inaccuracy and the tendency to cross one person or another.

There is likely no greater definitional confusion than that found in the world of efficiency units, and for that reason it may seem foolhardy to try. Except for one reason.

Mainstream investors and developers are catching-on to this product type, and entering the fray in record number.

Efficiency units are here to stay, and as with any innovation time is required for understanding, iteration and eventually, acceptance. Yet now the need for acceptance is more by the investment and development community than anyone else. Renters have spoken (for over a decade) and they are happy to pay for an efficiently designed, low-cost unit, even if that monthly check equates to greater than $5/square foot.

As far as investors, we’ve found some prescient ones willing to pay upwards of $700 a square foot to own assets that on average produce 30 percent more net operating income per rentable square foot. Investing in assets that produce income more efficiently is certainly no fad!

Everything old is new again

A long, long time ago apartment buildings contained two- and three-bedroom units. And in some cases, such units comprised more than 30 percent of the rent roll. Well, those times are upon us again. Calling the resurgence of an “old” unit configuration innovative belies the term. Yet, market forces are redefining this unit type.

The urbanization defining Seattle’s current market cycle continues to evolve, and part of such evolution is urbanization of downtown markets in Redmond, Issaquah and Shoreline. Otherwise suburban markets will again see the development of two- and three-bedroom units. Yet, the innovation of these units will go beyond smaller and more efficient layouts and will include finishes and features more attuned to decidedly urban geographies.

Further out on the continuum, as affordability concerns and statutory mandates take root in building design, expect urban buildings to have layouts and features customarily found in more community-oriented buildings that serve all age ranges. Every other urbanized center in the world has built this way for hundreds of years — the innovation to come might just bring us back to a global norm. 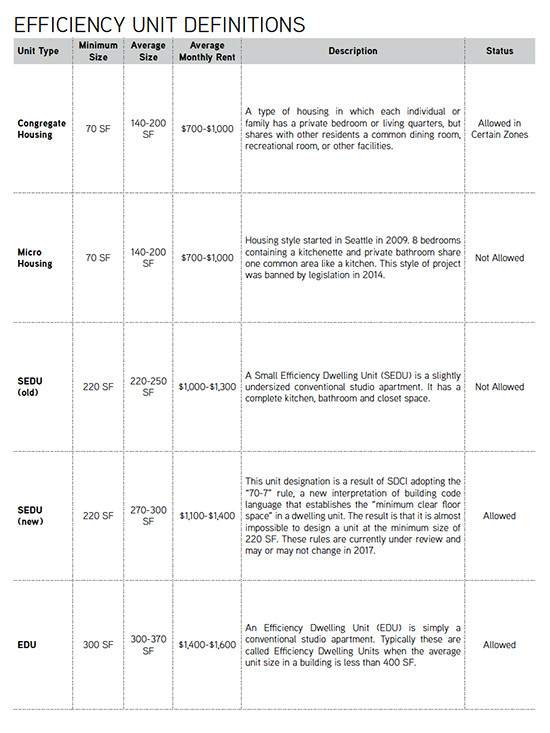