It’s been widely recognized that the Puget Sound area is one of the fastest growing markets in the nation.

This region’s growth has been spurred for decades by many different types of industries. Seattle has long been rooted in maritime culture and, like many other coastal cities, our shipping and trade access has been a positive contributor to healthy economic expansion.

Fast-forward to today, and Seattle is being redefined as a burgeoning innovation and digital hub, where much of the nation’s top technology talent and companies reside. But as our population continues to densify with thousands of new residents coming to Seattle every month for high-salaried jobs, many long-time residents are increasingly looking outside the city for affordable space and a more-balanced lifestyle.

And as communities throughout the region position themselves to embrace this growth, one question that developers continually ask themselves is: “Where will it happen next?”

To answer that question, sometimes we need to look at the past, particularly to area communities that have changed their identities. Take Kirkland, for example, which is a waterfront community on Lake Washington with early roots in shipbuilding. 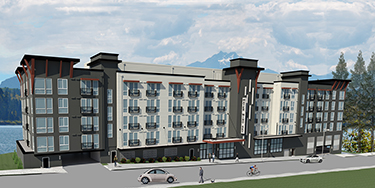 Image courtesy of Veer Architects [enlarge]
MBG Co. is developing Water, Wind & Sky on the downtown Bremerton waterfront. It will have 111 multifamily units when it opens in August 2018.

For 20 years, most of the boats on Lake Washington were either built or repaired in the Kirkland area. When the Ship Canal opened in 1917, Lake Washington was accessible for ocean-going vessels. By 1940, Kirkland’s Lake Washington Shipyard was building warships for the U.S. Navy on what is now Carillon Point.

Kirkland continued to evolve over the 20th century, adapting to the emerging wants and needs of Puget Sound residents who want to live near — not in — the bigger city. Today, according to the Northwest MLS, the median sales price of a home in Kirkland is $627,040.

So, what are the factors that changed a shipyard community into one of the most beautiful and expensive areas in the state? It’s called opportunity — and location.

But identifying these factors isn’t always easy. For developers, it takes a healthy dose of vision, not to mention risk, to see what others may not, with the objective of predicting what will make future residents fall in love with a town that is poised for change. Of course, cost and return-on-investment play key roles in this, too, making it even more critical for real estate companies to stay ahead of the urban development curve when targeting communities ripe for growth.

Much like Kirkland, the waterfront community of Bremerton has strong shipbuilding roots. Bremerton has witnessed slow and steady growth since its inception, and developers predict even more economic expansion over the next decade, especially given Seattle’s rising prices and lack of available space.

Developers recognize the incredible potential of Bremerton, and they anticipate a rising population over the next two real estate cycles as Seattleites seek a slower, more affordable alternative to life in the city.

A recent ballot measure will make it easier for people who want to work in Seattle but live on the Kitsap Peninsula. Starting this July, express ferry service will provide a reliable 28-minute commute from Bremerton to downtown Seattle. Currently, the car ferry takes 55 minutes and gives riders a relaxing, productive commute with Washington State Ferries providing Wi-Fi and sweeping views of Puget Sound and surrounding mountains.

But it’s not just a convenient commute that makes Bremerton attractive for downtown Seattle workers. Bremerton has a much lower cost of housing, both for sale and rental, compared to Seattle and other larger cities, as well as recent infrastructure improvements and one of the most picturesque settings in the Northwest. And unlike some Seattle neighborhoods that risk having their views blocked by new development, Bremerton’s natural topography will serve to protect and preserve the residents’ views and real estate values.

Residents are also drawn to Bremerton’s natural environment, which caters to endless outdoor activities such as hiking, fishing, cycling, kayaking and other wilderness experiences. Simply put, Bremerton possesses a triple treat: affordable housing, realistic access to nature and more-balanced lifestyles for its residents.

Bremerton’s population is expected to increase from 39,520 to over 50,000 by 2021, according to a recent report by research firm Conway Pederson. This projected population increase will result in a demand for additional apartment units, as well as increased transportation infrastructure.

To meet that need, Kitsap Transit has begun making a wide range of infrastructure improvements to accommodate commuters, including a new bus terminal. The city of Bremerton has been supporting the revitalization of downtown, improving transit and providing park amenities for pedestrians, helping to make the community attractive to both public and private investments.

In addition to infrastructure improvements, recent changes in downtown zoning, particularly for multifamily projects, will also contribute to Bremerton’s appeal for developers. The city increased in-city height limitations, making it easier to finance projects, and reduced parking requirement to half a space per unit.

Building on the water

MBG Co. is one of the first developers to recognize Bremerton’s prospects for growth, and the company is moving forward with several apartment projects in and near the downtown core.

MBG Co. will bring 111 units online in August 2018 at its Water, Wind & Sky project, which will be using a new process called high-definition building information model. The use of HD BIM in construction can save 30 percent on a project’s schedule timeline and 20 percent on its costs. The communication and collaboration of all data on one platform helps cut down on waste during the construction process, which allows for teams to run more efficiently and effectively.

According to the Northwest MLS, the median price of homes in Bremerton is $250,000, which pales in comparison to Seattle’s $640,000. Despite the wide gap in affordability, demand for homes in the Bremerton area is rising. Real estate prices in Kitsap County have already increased by more than 10 percent over the past year, and that number will likely only increase with the addition of the fast ferry and the many other investments being made in Bremerton.

In response to that demand, MBG Co. plans to break ground on two other projects in downtown Bremerton, providing some 317 well-amenitized units to residents seeking greater balance between their work lives and recreational pursuits.

Bremerton offers the lifestyle that many of us only dream of — waterfront living in the shadow of the Olympic Mountains, on the shores of Puget Sound, with restaurants, shops and outdoor activities only steps away from home. It offers a far different lifestyle than Seattle, where increased congestion and rising home prices make it nearly impossible for many workers to afford — and truly enjoy — life in the city.

Enterprising developers like MBG Co. are working to meet this demand with new market-rate housing that enables residents to have the best of both worlds.

Mark Goldberg is the principal at MBG Co. He has over 35 years of experience in the residential, multifamily and commercial real estate markets throughout the Seattle area.