On the Block: High Point remake is in the home stretch

Yesler Terrace has been grabbing all the headlines lately, as Seattle Housing Authority and its various partners begin to redevelop that marquee 30-acre property, but what about the even larger High Point?

The 120-acre site in southwest Seattle is nearing the tail end of its giant redevelopment plan, which was created by Mithun and broke ground in 2003.

SHA estimates that roughly $550 million in public and private funding has gone into High Point to date, creating new mix of subsidized, affordable and market-rate housing. Rentals, condominiums, townhouses and single-family homes have been built on land either sold or still owned by the authority. 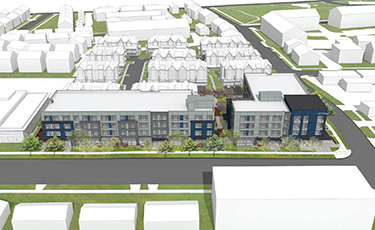 Image by SMR Architects [enlarge]
Upton Flats is shown here in the foreground, and Polygon’s townhouses are behind.

High Point was built during World War II and acquired as U.S. government surplus in 1953. When redevelopment began, it had only 716 low-income units. SHA estimates that, beyond the Shelter and Polygon projects, only about 168 more units are needed — both rentals and for-sale — to reach capacity.

Shelter's project, Upton Flats, will be on a 1.3-acre site at 6058 35th Ave. S.W., at the northeast corner of 35th Avenue Southwest and Southwest Graham Street. Below-grade parking for 108 vehicles will be accessed from Polygon's cul-de-sac to the east.

The Upton Flats site is presently open land that SHA has been trying to develop for years. In 2009, California's Lowe Enterprises backed out of a deal to buy and develop the property at a slightly larger scale with a grocery store. SHA says it expects to sell the land to Shelter by year's end, with construction to follow.

Polygon's Block 9 townhouse project will be on an undeveloped 2.6-acre site at 3420 S.W. Graham St., with garage parking for 52 vehicles. SHA expects to close on the sale of that property next spring, with construction to follow.

After that, says SHA Communications Director Kerry Coughlin, “There is no more land left to sell.”

Some private developers are still waiting to build on properties they've previously purchased.

Polygon has long experience at High Point, having built over 300 units since 2004 on land acquired from SHA. The company, which was sold two years ago to William Lyon Homes, also built an equivalent number of housing units as part of SHA's redevelopment of NewHolly. 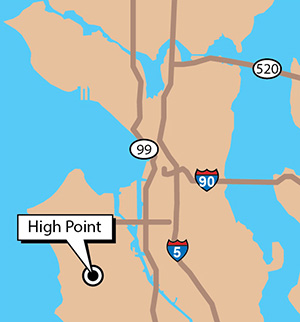 Polygon's team includes Milbrandt Architects and Core Design (landscape architect and civil engineer). As usual, Polygon will act as its own general contractor. Construction is expected to start next spring, with completion in early 2018.

Polygon is already building High Point at Hundley, on what SHA calls Block 34. The project at 6800 31st Ave. S.W. will place 37 townhouses and 17 single-family homes on 2.7 acres. There will be parking for 85 vehicles, 53 of them in a garage.

Completion is set for late 2017. Pricing hasn't been announced yet. Polygon's team is the same as for the Block 9 project, again using Milbrandt and Core.

On Block 9, Polygon and Shelter will be more than neighbors; they actually share the same corporate DNA. “They used to own us,” said a Polygon representative who preferred not to be named. Shelter's Eric Evans declined to comment, but he was part of the management team that left Polygon following the 2014 sale to William Lyon.

For all those parties, their long involvement with High Point is nearing an end.