On the Block: As new Nexus owners move in, Burrard is in no hurry to develop more condos

Burrard Group of Vancouver, B.C., made a bold bet four years ago, when it plunked down nearly $15 million for a corner parking lot at Howell and Minor, in the Denny Triangle. Almost no one else — fingers burned and bandaged by the Great Recession — was attempting a condominium project on such scale. But its 41-story, 389-unit Nexus, at 1808 Minor Ave. is now welcoming the first wave of residents, and only about 30 units remain unsold.

The smaller and more relatively affordable condos — studios and one-bedrooms — sold first and fastest. Some buyers camped on the sidewalk in the summer of 2016 to reserve units that started in the $300,000s for around 500 square feet. Penthouses on the uppermost residential floors, 39 and 40, now fetch the most premium prices. So, too, do the double-height corner units notched in the “erosion floors” that separate Weber Thompson's offset five-box design. 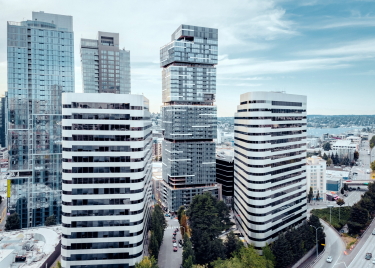 Photo by Lila Guizado [enlarge]
Most of the remaining 30 or so units for sale at Nexus are on the pricey side, ranging from the low $900,000s to around $2.7 million.

I followed the architects and a few other guests through the luxury tower on Tuesday, as part of a Seattle Architecture Foundation tour. Members of that trade appreciated the design work of Weber Thompson, and the construction work of Skanska USA. That firm broke ground on the project in early 2017. No one from Skanska was in attendance for the SAF tour, owing in part to the reported $25 million lien and payment dispute between the builder and owner.

Planning for Nexus began in 2015, when Bosa Development's Insignia was the only big condo project underway. Everything inside is as luxe as you'd expect, with premium finishes, appliances, amenities, dog-walking terrace, and a resident app, of course, to control the heat, A/C, door locks, etc. (Think Nest, but more bespoke.)

One poor woman, newly moved into her condo, was briefly trapped by my gaggle of design-istas in the futuristic touchscreen-controlled elevator. She took it in good humor, but probably thought to herself, “Tourists! Peasants!”

The 18,100 square feet of amenity area are mostly concentrated on the seventh floor, including a gym and coworking areas, and 41st-floor “Sky Lounge,” where SAF attendees noshed on wine and cheese. Both have terraces, with the most commanding views up top. There, one looks down on the thicket of cranes and active construction sties extending west along Denny.

The views are fantastic — sweeping from Elliott Bay to Lake Union — but only for now, I realized. All those other planned 440-foot towers will soon be blocking many residents' views, creating a kind of Manhattan canyon/keyhole effect.

Outside on the roof terrace, the east side of the building faces noisy I-5 and the ugly 1980s rooftop terraces of Metropolitan Park. But inside behind Nexus' ultra-quiet windows, the view east to Capitol Hill will be the most protected. If you like morning light with your coffee, buy on that side of the building.

I was impressed by the covered chrome bike racks outside on the sidewalk — unblemished and unscratched. Down there, a planned coffee shop, open to the public, will extend into the lobby on Minor. On the corner, there are conspicuously no broker signs on the planned bar/restaurant space. Burrard says an announcement will come later this spring.

Also, says Burrard's Brad Laviolette, there should be more news soon regarding its midblock site at 2407 First Ave. in Belltown, which it purchased from the Low Income Housing Institute last year for about $8.75 million.

The plan there is for a 10-story tower with up to 180 units. They won't be condos and they won't be extended-stay hotel rooms for business travelers. Instead, citing Burrard's history in hospitality and resorts back in Canada, he says the unnamed project will establish a new company brand to be replicated in other markets. “Seattle is the first market. But we hope we can scale it.” It'll offer fully furnished short- and long-term rentals with amenities, retail and a small amount of parking.

He isn't on Burrard's land acquisition team, but says that company's Christian Chan owns a home in Seattle and is down here regularly. One acquisition Laviolette did clarify was the 2017 purchase of the old Salal Credit Union building, at 1515 Dexter Ave. N. The DJC reported at the time the buyer could not immediately be traced. Burrard bought it through an LLC for $9 million; recent renovations cost another $300,000, per city records.

Northwest Studio was the architect for the renovation of that 40-year-old, four-story office building, with Goudy Construction as general contractor. It has 23,920 square feet on three levels above structured parking. Connor McClain and David Abbott of Colliers are leasing it for Burrard.

That building was originally sold as a possible multifamily development play. Offices aren't entirely an outlier in Burrard's portfolio; it also has two office buildings in Vancouver and San Francisco. Firm founder Caleb Chan started in 1979 with golf courses and hotels, including some now at Whistler. The Bay Area, Vancouver and Seattle continue to be the firm's preferred markets. “We're mainly focused on the Pacific Rim,” says Laviolette.

That focus may not extend to another high-rise condo in the near future. Nexus was by far Burrard's tallest and likely most expensive project — worth $240 million, Christian Chan told Puget Sound Business Journal before it broke ground. Its other condo projects in Hawaii, San Francisco and Vancouver have been far smaller.

And there's now more competition in the small but risky condo downtown market. The Downtown Seattle Association recently estimated that 966 condos are now under construction downtown.

My math is slightly different: Create World's Emerald, with 262 units; Da Li Properties' Koda, with 203; Laconia-Vanke's Spire, with 352; and Daniels Real Estate's 800 Columbia St., with 271 units. That's about 1,088 units total, though such figures always change. (For example: One buyer at Nexus is combining two units.)

Several hundred more condominium units are in the planning stages by Bosa Development, Westbank, Concord Pacific, Caydon USA, Plus Investment, and possibly Arbutus and Onni, which may opt for apartments instead. Almost all those names have international roots in China, Canada and Australia. Apart from Daniels, local firms don't seem to have the appetite.

Looking out the windows of the Sky Lounge, Todd Mayne of Weber Thompson said his firm is designing several of those new rental towers sprouting in the Denny Triangle. And all are being built to condo grade.

So, I wondered, if the state Legislature were to reform our condo liability laws again, might we again see a wave of condo conversions — as before the recession? When all these shiny new high-rises reach their 10th or 20th birthdays, with the paint scuffed and appliances dinged, when all the old parking lots have been developed, maybe one day there could be more homeowners in the Denny Triangle.