As the crowdfunding industry has grown into a $3 billion-a-year market, the number of architecture groups that have used crowdfunding has increased dramatically.

Including projects ranging from a New York community book store to a Colombian skyscraper, the growth of this financing option has led to a broader array of projects being developed both domestically and internationally. Such applications have only driven curiosity by practicing architects and emerging design professionals about the more inventive ways crowdfunding has furthered architecture projects and the possibility for this to become a regular, usable tool for individual professionals and firms.

While crowdfunding as an industry has experienced significant growth, the crowdfunding campaigns themselves serve almost equally well as an advertising campaign, an informational and recruitment tool, and a direct opportunity for final contribution.

As members of the architecture profession look outside of the traditional financing streams to further regional designs and passion projects since the 2008 recession, ideas such as the “I Make Rotterdam” project have become a genuine possibility for design professionals. 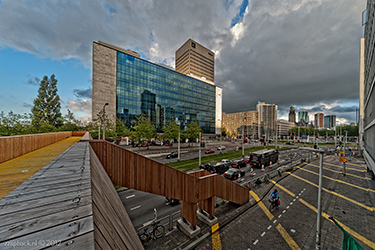 Photo by Rob de Voogd/flickr [enlarge]
The initial segment of the Rotterdam pedestrian bridge crosses over a busy roadway.

I Make Rotterdam was envisioned to recreate the inner city of Rotterdam in the Netherlands, and help build a more pedestrian-friendly environment. As high-speed urban traffic zoomed by at 60 kilometers per hour, walkers and bicyclists were left out of place and with a dangerous commute.

Millions of urban dwellers have at one point or another confronted the issue of what architecture options are available for a residential area when it becomes severely congested and is in need of additional outlets and mobility improvements. In this environment the I Make Rotterdam campaign was born.

Introducing new pathways in a city of 600,000 people is no simple feat. With generations of infrastructure overlaid and integrated into a city grid, a project creator would have to display a high degree of creativity to introduce a concept that is practical, visually fitting and effective.

Maxwan Architects + Urbanists and Zones Urbanes Sensibles, the project creators, collaborated to consider architectural solutions to Rotterdam’s long struggle with a city split in half by heavy traffic, encumbered with few ways of accessing shopping and recreational areas by bike and foot, and surrounded by the immovable infrastructure of high-rises and highways.

As in most cities, residents have very few options and little recourse when it comes to community development projects that are meaningful to them, but may not command the interest of city, state or district elected officials or the support of external financing sources.

Having limited means to personally invest or spur investment in infrastructure, the I Make Rotterdam donation crowdfunding campaign solicited financing for the Luchtsingel pedestrian bridge with the goal of increasing the city’s walk-ability while attracting retailers and restaurants along the newly populated route. The goal was to tap into the interest for a tangible solution by local residents and the business community that would see benefits from the project’s completion.

As with any crowdfunding campaign, the more effectively a point of discussion can be created, the more likely the project is to flourish in the immediate, extended and broadcast networks, and generate a market of interested supporters. A campaign must grab the attention and imagination of the audience to generate the kind of information penetration needed to spur funding through the investment of hundreds or thousands of individuals.

The campaign creators here produced a marketing plan to build a bridge that was provoking and inspiring: “The more you donate, the longer the bridge.”

Zones Urbanes Sensibles and International Architecture Biennale Rotterdam designed the bridge to be built in segments. Independent sections of the bridge could be constructed one at a time to build towards the completed structure. The more the crowd contributes, the quicker individual sections will be completed and the sooner the entire bridge will be operational.

The design required the use of 17,000 boards for the 1,150-foot bridge, connecting the Hofplein area with the northern district of Rotterdam.

The Luchtsingel (Dutch for “raised promenade”) represents a great example of a construction idea that was needed but could not find conventional financing. The city of Rotterdam intends to build a bridge that does exactly what this concept plans, but would otherwise be unable to address this issue for at least 30 years. Donation crowdfunding provided residents with the option of personally supporting the development their region needed rather than having their mobility or commercial opportunities be hindered indefinitely by the lack of external financing. 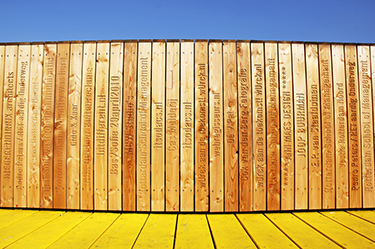 Photo by Jacqueline ter Haar/flickr [enlarge]
Donors’ names were inscribed on wood planks that make up part of the bridge.

The Luchtsingel campaign took advantage of the opportunity to offer a very different kind of incentive. While the design of the bridge drew interest, what was inscribed on the bridge drew even more attention to the project and its creators. Contributing to the bridge offered an advertising opportunity that no one else could.

For every contributor who donated to the construction of the bridge, a group of characters they selected would be permanently carved into the wooden beams. Messages, names of loved ones, company mottos and special dates could all be listed for the eternity of the bridge for a onetime payment starting at 25 euros for one plank and 1,250 euros for an entire section.

To date about 1 million euros have been raised on the Kickstarter campaign and the project creators are well on their way to providing a needed infrastructure upgrade to Rotterdam based on the financing of the donation crowdfunders.

Zones Urbanes Sensibles had initiated similar projects in the Rotterdam area before, and because of its ability to involve the local community and crowdfund its suggestions, it received recognition for its proactive, creative approach. In March 2012, the firm won the Stadsinitiatief 2012 award along with a 4 million euro cash prize to further its projects.

Because of that recognition and support, Zones Urbanes Sensibles has been able to establish itself as a group pursuing innovative, sensible design alternatives and fresh ideas, all while it individually carries out its own projects, independent of the collective.

What made this particular campaign successful was the media attention it got from “The more you donate, the longer the bridge” statement. This grabbed people’s attention. It made them talk about an architecture project in amusing, motivational and community beneficial terms.

The Luchtsingel offering was effective because it engaged the local community in a way that fostered a positive reception and this can be a distinct benefit of a crowdfunding campaign. If the crowd feels moved by the campaign and sees the regional benefit, it can become a stakeholder and promoter with a vested interest in the outcome.

The I Make Rotterdam campaign strived to create multiple avenues of interest to ensure the possible crowd of investors was as large as possible. It targeted the local region that struggled with commuting and also believed a pedestrian bridge was needed to alleviate traffic struggles. And it targeted those who were motivated by the idea of having their name, message or brand permanently listed on the structure.

While this is a reward being offered to contributors, it is secondary to the primary purpose of the campaign, which is to solicit donations to complete the bridge. The initial section was finished last year.

The Luchtsingel pedestrian bridge is one of hundreds of active architecture projects using crowdfunding to support the design and execution of new infrastructure concepts. Either in place or in support of existing financing streams, crowdfunding provides architects with the ability to self-select projects and to engage the community by offering a stake or input in the projects’ design direction.

Shervan Sebastian is manager of federal relations at the American Institute of Architects in Washington, D.C.