“Science, we generally are told, is a very well-ordered mechanism for understanding the world … for gaining facts, for gaining data ... I’d like to tell you that’s not the case.” So says Columbia University neuroscientist Stuart Firestein in his February 2013 TED talk titled “The Pursuit of Ignorance.”

As Firestein points out, the scientific method may not be a set of rules as much as a messy process of trial and error. Science is indeed failure based, or “farting around in the dark,” as he says. But scientists throughout history have done a great job of embracing failure and calling it progress — because it is.

Scientific exploration and discovery sound a lot like art class and architectural design studio. Develop a problem or a ask question. Try something to answer it. If it doesn’t work, critique what was and wasn’t successful. Change something and try again. Or try something else. Fail to get something useful? Start again.

There is a focus on STEM (science, technology, engineering and math) education in the U.S. In the last decade, a number of projects across many educational sites in the state of Washington have created new and important spaces for the sciences, from new STEM high schools to specialized scientific facilities on community college and university campuses. 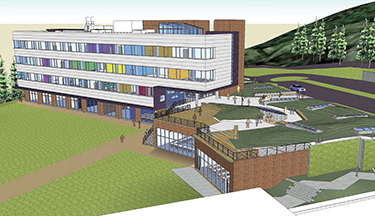 Images courtesy of SRG Partnership [enlarge]
SRG designed a new science, math, art and nursing building for Grays Harbor College. The project is under construction and should be finished in 2015.

This trend might be based on a real need for facilities that are “state of the art” with specialized laboratory and technical features to improve student interest and success in STEM subjects. However, an equal number of thoughtful people are championing a movement from STEM to STEAM — putting “art” and creativity back into the STEM fields. For example, check out the Rhode Island School of Design (http://stemtosteam.org). In a recent tweet, an elementary school boasted that it’s “the school of wrong.”

Scientists and designers clearly are not all that different. Ignorance, as described by Firestein when talking about science, is central to something in great design teams and great design problems. Architects don’t embark on designing a building because they know how or because they know what needs to be done; that’s only part of the equation. Great projects come from first questioning why. Not knowing how or what could be even better than knowing, as long as one is caring and persistent about finding out what needs to be understood.

It can be no mistake that one of the essential books on architectural programming, now in its fifth edition and cited regularly, is titled “Problem Seeking.”

This approach reinforces the wonderful connection between science, art and design. Their common thread might be summed up as a universal quest for “why.”

At the heart of all education, encompassing the full range of aptitudes and learning styles, children are encouraged to ask, “Why?” This practice suits Firestein’s premise that we should be striving to “make better ignorance.” His point is not only that we should continue asking questions in our adult professions, but also that we should learn how to frame thoughtful, interesting questions. 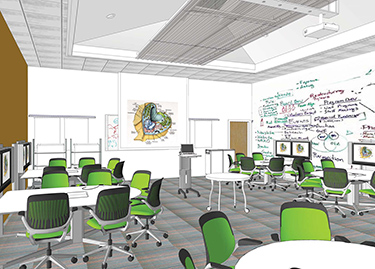 [enlarge]
The space is designed to encourage interaction between artists and scientists.

When this perspective is applied to education design, it reveals exciting possibilities for collocating spaces for science, art and human interaction. Introducing opportunities for informal meetings around and between specialized laboratories and studios provides a critically important second half of the discovery equation — the chance to “fart around” with colleagues.

These in-between places, launching cross-disciplinary conversations and relationships, open the way for great questions that can then be investigated in their neighboring specialized environments; the importance of the laboratory or studio cannot be underestimated or left unrecognized in facility plans. But overlapping places for the arts with places for the sciences is a powerful tool to awaken creativity, innovation and critical thinking — essential 21st century skills, whether you’re a biologist or a modern dancer.

Not long ago, the American Academy of Arts & Sciences created the Commission on the Humanities and Social Sciences. Earlier this year, the commission released a report called, “The Heart of the Matter” (http://www.humanitiescommission.org) with three overarching goals that “cannot be achieved by science alone.”

1. To educate Americans in the knowledge, skills and understanding they will need to thrive in a 21st century democracy.

2. To foster a society that is innovative, competitive and strong.

3. To equip the nation for leadership in an interconnected world.

Emphasizing the humanities as critically complementary to the sciences, the academy also produced a short film on the topic (http://www.humanitiescommission.org), including significant leaders in both realms. Actor John Lithgow starts the narrative describing a simple flower and how it exemplifies the relationship of STEM to the arts. Later, George Lucas explains, “If the sciences are the ‘what,’ then humanities are the ‘why.’”

So, to my fellow designers and scientists, how about taking the fear out of experimentation? Get out there and allow things to get messy, to overlap and blur. Consider space for the sciences as space for the arts and humanities and vice versa. Let them crash into each other and reveal wonderfully human results.

Barney Mansavage, AIA, LEED AP BD+C, is a principal at SRG Partnership focusing on architecture for education and civic places. He is leading SRG’s project for a new science, math, art and nursing facility at Grays Harbor College. He also receives valuable insights from his wife who is a “real” scientist, the kind that spends hours in the lab with test tubes.