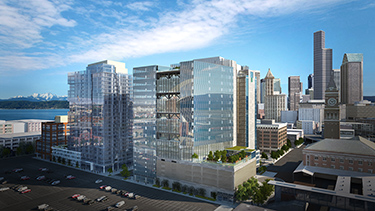 Renewed confidence among developers has translated to a significant turnaround in recent years for Freiheit & Ho Architects, a mid-sized Kirkland architecture firm.

“There is optimism out there and an interest to look at new projects,” said Richard Freiheit, president of the firm. “We continue to expand our business.”

Freiheit projected that the volume of work at his firm will be up 20 percent over last year, continuing a turnaround that began in 2010.

In the multifamily sector, Freiheit said his firm is not seeing a lot of condo activity but is seeing improvement in the apartment building sector.

Freiheit & Ho has finished design of the Stadium Place East Block — a 677,000-square-foot project that will include an Embassy Suites hotel, as well as retail and office space. It also has completed work on the FedEx ground distribution facility in Redmond, a 212,000-square-foot project that will be the largest industrial development in that city and LEED silver certified.

The firm is finding additional work in upgrading commercial buildings. “We’re seeing a lot of work taking older facilities and modernizing them, from an operational and design standpoint,” Freiheit said.

Freiheit & Ho is working with chain restaurants on modernization plans in Seattle and the western states. Freiheit said due to confidentiality agreements he could not discuss which chains. But he said some restaurants are looking for a design that reflects a “fresher, healthier lifestyle” trend among restaurant-goers. Some restaurants, for example, are requesting more natural building materials be used in the designs.

The restaurant and commercial project facelifts also have an equal focus on operational improvements to make the flow of the spaces more efficient for workers, he said.

In his 35 years in the design world, Freiheit said he had never seen an economic downturn as devastating as the 2008 recession. The firm in 2008 had 58 employees and by January of 2010 had slashed the staff level to 23. The current staff numbers 42 — signaling the firm’s confidence in the future and recovery from the recession.

Freiheit said revenues in each of the last three years have increased as much as 20 percent.

He said the recovery is, in part, a reflection of developers’ confidence. “Developers and commercial clients are not ones to make moves unless they really understand the saleability of a project,” he said.