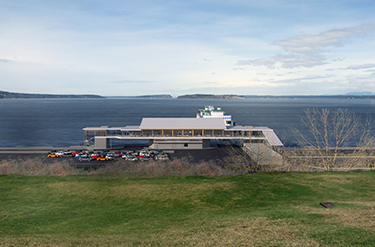 Courtesy Washington State Ferries [enlarge]
BergerABAM is the structural engineer for the new Mukilteo ferry terminal that is expected to open in 2017 or 2018.

Projects: Waterfront facilities engineering for the U.S. Navy at Bangor; upgrade to Pier 3 at the Port of Tacoma; interchange reconstruction at Interstate 5 and Port of Tacoma Road for the city of Fife

Having weathered the economic storm of the late 2000s, BergerABAM is pressing ahead, confident that new economic avenues will keep revenues flowing to the firm, according to Arnie Rusten, president and CEO.

“We’re stable and on solid footing,” Rusten said. “During the entire downturn cycle, we’ve been different than most firms. We have been strongly tied for federal work during the downturn.”

A reliance on federal work has left BergerABAM searching for new strategies to deal with federal cutbacks.

BergerABAM provided waterfront facilities engineering for the U.S. Navy at Bangor, and is conducting an interchange reconstruction at Interstate 5 and Port of Tacoma Road for the city of Fife.

But Federal cutbacks on construction spending mean that projects for the U.S. Navy and Army Corps of Engineers, for example, are not as plentiful as prior years, Rusten said. “We’re certainly seeing some of the effects now,” he said.

BergerABAM’s response is to make a slight shift from federal to private work. While the firm in recent years has done about 70 percent federal work, this year it’s hoping to do about 60 percent federal and 40 percent private, Rusten said.

Rusten said while cutbacks have hurt new federal construction, there is still work to be found in remodeling federal facilities and maintaining them.

On the private sector side, BergerABAM is looking forward to finding work related to shipping fuel from North Dakota by train to refineries on the West Coast and Alaska, Rusten said. “There is a big environmental and permitting component” to that work, he said. The work could include engineering projects for improving rail lines and crossings.

Rusten said BergerABAM will continue to split evenly its workload between civil and structural engineering projects. “It’s good to be in a little bit of both,” he said. “We hope that additional work from the private sector will come.”