As baby boomers age, there is a growing concern that a large amount of the population will become increasingly hard-of-hearing. Although this is a natural part of the aging process, this reality brings with it a greater need for assistive listening devices to serve these individuals.

While hearing aids work very well for most users, especially in smaller spaces with a low amount of background noise, they have their drawbacks.

A hearing aid, in simple terms, is a microphone, amplifier and speaker all neatly nestled into a device that fits into a user’s ear canal. Hearing aids help the user understand human speech, but can cause issues when listening to music or other sounds that are outside the frequency range of the human voice.

Another limitation of the hearing aid comes in larger spaces.

Think of the last time you visited a vibrant crowded hipster restaurant that was decorated in hard reflective surfaces like concrete, wood, glass, brick and/or metal. You probably had to raise your voice to speak to your dinner guest that was only a few feet away from you. Since the microphone in the hearing aid “hears” all the sound that reaches it, it turns all the sound up evenly — background noise and all. 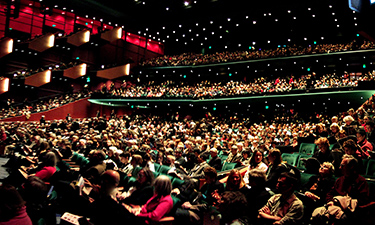 Photo by Pilipe Fortes at flickr.com [enlarge]
Performing arts centers and theaters, such as Marion Oliver McCaw Hall, are required by law to have assistive listening systems.

When the sound that is trying to be heard is not much louder than the background noise, the standard hearing aid is not very effective.

While great strides have been made in hearing-aid technology to reduce this anomaly, the technology has trouble with fluctuating background noise like in the hipster joint example. Voices from the other patrons in the restaurant can mask the voice of the person the hearing-aid user is trying to understand.

This lack of intelligibility is what drives the need for assistive listening devices.

The September 2010 revision and update of the American Disabilities Act took effect on March 15, 2012.

While the update to the law formalized some issues that had become practice, the most significant change came to the section regarding assistive listening systems (ALS) — how the devices are defined and where they are required.

This important change affects all owners and designers of venues with assembly areas where audible communication is integral to the use of the space and amplification of sound is included, such as classrooms, auditoriums, courthouses and performing arts centers.

Prior to the update, the ADA limited the requirement of installed assistive listening systems to venues with 50 seats or more. Some interpreted this requirement as 50 or more fixed seats; for example, a multi-use auditorium with flat-floor event spaces without fixed seating would sometimes try to be exempted from the ALS requirement.

The update to the law made it clear of what ALS is and where it is required to be installed and available for use.

Section 106.5 of the ADA Standards defines ALS as an amplification system using transmitters, receivers and coupling devices to bypass the acoustical space between a sound source and a listener by means of induction loop, radio frequency, infrared or direct-wired equipment.

This narrowed definition of ALS makes it clear that these systems are to be used for hard-of-hearing persons, both with and without hearing aids, therefore increasing the number of people benefiting from the system. By not including closed-captioning and live sign-language interpreters, this definition inherently denies a venue the ability to rely upon either of those methods alone as an impaired hearing accessibility solution.

What this means is that anywhere amplified sound is part of the presentation in a public space, an assistive listening system is required to be available for use regardless of the size of the space or number of seats, fixed or not.

Some examples of these assembly areas are defined in Section 106.5 as: A building or facility, or portion thereof, used for the purpose of entertainment, educational or civic gatherings, or similar purposes. For the purposes of these requirements, assembly areas include, but are not limited to, classrooms, lecture halls, courtrooms, public meeting rooms, public hearing rooms, legislative chambers, motion picture houses, auditoria, theaters, playhouses, dinner theaters, concert halls, centers for the performing arts, amphitheaters, arenas, stadiums, grandstands, or convention centers.

This inherently excludes general paging announcements (public address) and background music from the ALS requirement. Public address (for the deaf and hard-of-hearing) is covered elsewhere in the ADA.

All existing assembly areas (venues) covered under the ADA need to provide and promote the provision of an ALS or possibly face consequences.

These systems need to work properly and venue staff needs to be trained to promote, distribute and ensure functionality of these systems. With the complexity of matching the proper style of an assistive listening system to a venue, a sound engineer should be consulted to ensure that the proper system is chosen to match the needs of the venue and its patrons.

Many larger venues with assistive listening systems already installed will testify that the system goes mostly unused. This result is typically a symptom of poor advertising of a system’s availability or from the lack of policy or staff training in providing for the system’s use. Regardless, a hard-of-hearing person should not be denied the ability to participate where amplified sound is used as part of the event.

With a large number of Americans quickly reaching an age where hearing loss is natural, it has become important to provide assistive listening systems more than ever before, regardless of the fact that it is a federal law to do so.

Stephen Malone is a senior technology consultant of audiovisual systems at Sparling Inc. in Lynnwood.