Little more than a year ago, I embarked on the amazing journey of leading a team in designing an addition to Pike Place Market. Our quest? Revealing the potential of the last undeveloped parcel of market property just south of Victor Steinbrueck Park.

As a designer, the responsibility of creating a prominently placed mixed-use building that respects the unique history and character of one of Seattle’s most familiar and beloved city icons — while exploring new potentials — is no small feat. Finding an appropriate solution that links tradition and modernity is both daunting and exhilarating.

Pike Place Market opened in Seattle in 1907 and is the oldest continually operating public farmer’s market in the country. Withstanding urban renewal pressure and saved by a citizen’s initiative in the early 1970s, it is now one of the most significant economic, cultural and historic resources for Seattle and the region — attracting 10 million visitors each year.

The remaining market site to be developed is at the foot of the oddly abrupt Desimone Bridge, between Western Avenue and the state Route 99 Viaduct. It is currently a surface parking lot that has sat vacant since the Municipal Market Building located there was destroyed by fire and demolished 30 years ago. 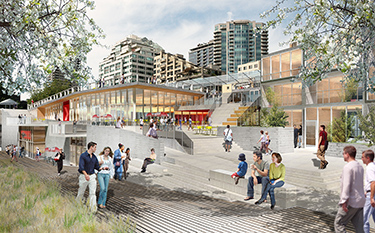 Rendering courtesy of The Miller Hull Partnership [enlarge]
The complex will be on the path of the Overlook Walk connecting the city and shoreline.

While our firm has the privilege of tackling a design for this site at this particular point in time, over the years numerous esteemed Seattle architects have advanced excellent ideas about how to deal with this challenging location. But in a sense, a financially viable solution has always been beyond an architect’s reach.

Most people understandably associate Pike Place Market with the colorful market stalls and lively mix of restaurants and shops, but it is so much more than that. What is unknown to many is that the maze of the market also contains low-income and senior housing, and invaluable social services such as a medical clinic, food bank and day-care center.

A new building on this site that provides additional housing, non-franchised retail and public services for homeless and low-income populations demands such a substantial programmatic volume that it literally overshadows the desire for a low-profile building that would protect views from the existing market — making it a non-starter in the minds of the market community and for those who value its exceptional panoramic outlook.

Interestingly, the planned demolition of the Alaskan Way Viaduct and subsequent deep bore tunnel project have led to fortuitous new financial and design opportunities. State mitigation funds have been allocated for a new 300-stall parking garage on the site to replace parking under the existing viaduct that will be lost when it comes down. And anticipating the removal of the viaduct prompted the city to turn its attention to reimagining the waterfront without the elevated roadway.

Pike Place Market is positioned as the central connection point to engage with the new Overlook Walk being designed by New York City firm James Corner Field Operations. The overlook will rise from the waterfront with an extended public space through and over the market site to the city.

With this new financial and visionary partnership between the market, city and state, a project profile has materialized that is feasible and which can finally realize the dreams of so many imaginative minds that have wrestled with the untapped potential of the market’s front along Western.

So, besides having the responsibility to design a prominent new structure for a notable and recognizable landmark, this project is now also part of the city’s effort to overhaul the entire waterfront, and to dramatically improve the connection between the water’s edge at Elliott Bay and the urban core above.

Without a doubt, the project requires solving the most challenging range of complexities that any site has ever posed in my nearly 40 years of work as an architect. The plan being developed draws on volumes of studies conducted about the physical site, zoning codes and regulatory constraints, market guidelines, circulation patterns, massing studies and economic feasibility. Importantly, design concepts and the organization of spaces were also influenced by community and stakeholder involvement through design charrettes and public meetings.

Sophisticated computer models have examined building massing options to review view corridors from both internal and external spaces in a range of building profiles. An overarching goal has been to not only meet the market needs, but to collaborate with the city in developing a series of new public circulation and outdoor gathering spaces that will extend and enhance Pike Place Market’s prominent role in the cityscape.

Significant physical challenges will be:

• Building on a steep hillside over and around a 1904 BNSF Railway train tunnel that cuts diagonally under the site, without being able to touch or create an additional load on the tunnel.

• Designing a parking garage that drops four levels below Western Avenue and connects to an adjacent existing parking structure, while accommodating a west exit to a new extension of Elliott Avenue that will be constructed once the viaduct is removed.

Programmatic requirements call for a minimum of 40 low-cost housing units and accommodation of a range of uses that expand the market’s functions, character and history.

Every cultural design project brings overlays of symbolism, heritage and mission. Pike Place Market’s mosaic of day stalls, fixed retail and restaurants, and the cacophony of sights and sounds discovered in the labyrinth of multiple pathways and stairways through humble buildings offers culture in spades.

The spirit of Pike Place Market is ephemeral — it is not about high-architecture. In the fullest sense of the word, it is all about place. Which is why the challenge to express the intrinsic character of this landmark through architecture — in a way that does not detract or look out of place — is so great. And why it is necessary to elevate the conversation around a new building there from well-meaning but stoic resistance to change by many champions of the market, to enthusiasm and optimism for what can be.

My firm has built a reputation for projects of influence that positively impact people beyond the boundaries of a singular building and which are well-suited to their regional setting.

In assessing the Pike Place Market site’s context, our design team was inspired by the industrial structures and simple materials found throughout the market that embody the essence of what is a very utilitarian complex. The design that is emerging has a strong Northwest industrial toughness, in keeping with the Pike Place Market “vibe,” yet includes large, open volumes with glass that offer transparency inside and out.

The palette of concrete and heavy timber brings the material “language” of the market across Western and provides a familiar backdrop for an engaging new mix of small retail shops and stalls, restaurant space, underground parking, low-income housing, an incredible new public view terrace with outdoor seating currently lacking at the market, and a pedestrian connection to a walkway that will descend from the market and connect to the city’s central waterfront.

In adding to this historic hub cobbled together over the past 100 years, the respectful architectural expression of the new site enables the market to do more of what it does best — with an updated Western front that keeps it fresh and relevant. And it has been an incredible opportunity to represent the city and market’s interests while working with James Corner and his team, which has a strong track record of creating great public spaces worldwide.

The collaboration of these two projects will have a positive, lasting impact on Seattle.

Reflecting on the challenges and opportunities of this project that is so important to the people of Seattle and their visitors, I was reminded of the character Chance in the movie “Being There,” who makes the statement “life is a state of mind.” After 20 months of work, with still much to be done to reach the project’s true potential, in both a personal and community sense, I ask: Is the market’s architecture a state of mind?

David Miller, FAIA, is a founding partner of The Miller Hull Partnership. He also is chair of the Department of Architecture at the University of Washington.