Design Perspectives: Some of WSCC expansion may go underground

Squeezed into the center of Seattle, the Washington State Convention Center has always been over the top.

Beginning in 1985, it reached over Interstate 5 with a unique landscape, Freeway Park. Then in 2001 it spanned Pike Street with a high glass-and-steel barrel vault and transparent walls.

Now officials are planning a one-million-square-foot expansion for the center, which would nearly double its total space on a site bounded by Pine and Howell streets, and Ninth and Boren avenues.

As currently proposed, some of the addition will be literally underfoot, beneath Olive Way and Terry Avenue.

“That’s a clear direction of what we want to do,” said longtime Seattle developer Matt Griffin of Pine Street Group. “Yeah, it’ll cost more. But it’ll be better for the city and for the guests.”

“If you put (the addition) above ground, it’s going to be overwhelming,” said Griffin, who is working with convention center President and CEO Jeff Blosser on planning the project.

Putting some of the expansion below ground will mean city streets can continue to do what they do best: provide an interesting, changing retail environment for pedestrians. 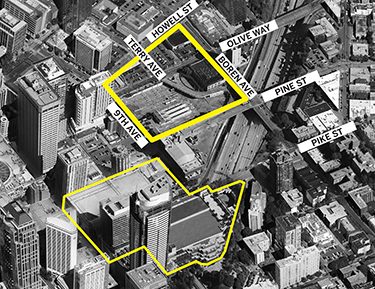 Photo courtesy of WSCC [enlarge]
The current Washington State Convention Center sits next to Two Union Square. The footprint of the addition is above and to the right, along Interstate 5.

Construction is slated to begin in 2017 and finish in 2020. Evolving plans call for the project to include a 170,000-square-foot exhibit hall as well as some smaller exhibit spaces, meeting rooms and ballrooms. There also may be co-development opportunities for office, hotel or residential projects on part of the development site.

LMN Architects did a feasibility study for the expansion, and the process of selecting a design team is under way.

Griffin said an architect will be selected by early November.

The construction cost has been estimated at $650 million to $700 million. It will be covered by hotel tax-backed bonds and convention center revenues, Blosser said.

Most of the added square footage would be built on a site currently owned by King County and used as a major Metro bus station. It is across from the historic Paramount Theatre and a block north of the convention center’s entrance.

The expansion site also includes a wedge of land even further north across Olive Way, now occupied by a Honda dealership. WSCC Public Facilities District bought that land and is negotiating to buy the bus station site.

During construction, bus traffic would be routed around the site before entering the bus and rail tunnel, owned by Sound Transit. Some bus traffic is expected to be phased out as the Sound Transit light rail system is expanded.

In the current scenario, Olive Way and Terry Avenue on the development site would be vacated during construction and replaced on lids over the new structures.

Some of that will go to bars, restaurants and other retail spots where convention-goers spend their evenings and their expense accounts. But the bulk will go to hotels, and that’s why hotels are willing to pay taxes to finance the expansion.

Griffin said the current convention center fills a lot of hotel rooms, but not steadily. Larger corporate and trade conventions can be hosted only one at a time. That means each room-filling wave of convention-goers leaves two troughs of empty space during the inevitable days of convention set-up and break-down.

Doubling the size of the convention center will add a kind of sine wave of hotel guests, because it allows two medium-to-large corporate events to run simultaneously. The expected effect is that occupancy will even out and hotels will become much more profitable.

Griffin’s history includes a three-block redevelopment in downtown Seattle: Pacific Place, Fifth & Pine Building, 1505 Fifth Avenue Building and the Seaboard Building. He also is an advocate for strengthening vital east-west connections between downtown and the Pike-Pine corridor on Capitol Hill.

Moving westward across Interstate 5 near the convention center, Pike/Pine connects trendy areas on Capitol Hill with Seattle’s commercial core. Griffin and other boosters, including Downtown Seattle Association, want to extend that energy through neglected blocks between Third Avenue and First Avenue to Pike Place Market — and to the waterfront beyond.

Expansion of the convention center, just west of the interstate, would amp up the whole corridor with a steady stream of after-hours foot traffic.

“When they get downtown,” said Griffin, “they just want to get to the market.”