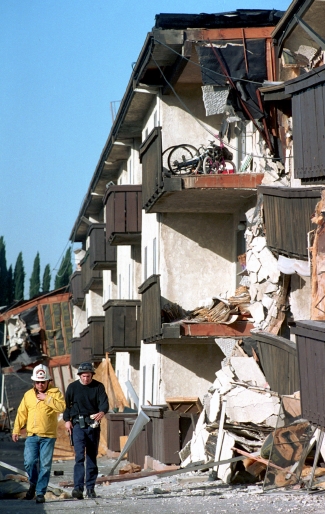 In a city the size of Los Angeles, there’s bound to be a large number of what Terry Lundeen calls “bad actors.”

As a structural engineer with Coughlin Porter Lundeen of Seattle, Lundeen uses the actor analogy to define a building that doesn’t meet current seismic codes and poses a danger to its occupants in an earthquake.

“In our profession, it’s been known since the ’70s that we’ve got this building stock with some bad actors,” Lundeen said, referring to buildings across the United States. “One problem with these buildings is that they tend to be big and expensive to retrofit.”

Earthquake retrofits for older buildings has been “a long time coming,” Lundeen said.

For the city of Los Angeles, where the threat of the next earthquake is a never-ending concern, civic leaders recently forged a consensus on the politically charged issue of mandating building owners to seismically retrofit their buildings without putting them in a financial bind.

Driven by the concern that two types of buildings — wood-framed apartments and older concrete buildings — will suffer severe damage in the next quake, the Los Angeles City Council last week passed an agreement that will ask owners and building occupants to equally share retrofitting costs.

“It’s been a very hard process,” said structural engineer Michael Cochran, who led a task force to help solve the issue of retrofitting the buildings in Los Angeles.

“When you start getting into this, everyone has a different agenda.”

“The city council’s agenda is protecting all members of society,” he said. “For building owners, their biggest priority is getting loans and financing. For tenants, it’s ‘How much will this cost me to live or work in this space?'"

The council, according to Cochran, an engineer with the Los Angeles firm Thornton Tomasetti Associates, realized that the city could lose 10 percent of its buildings in a big quake. “That’s a safety issue and also a big hit to the local economy,” he said.

But taking the strong-arm approach, simply mandating that building owners foot the high cost of retrofits, would not have worked. “When you try to force this on somebody, it doesn’t work well,” he said.

The council ordinance means that owners of wood-framed buildings — typically older low-rise multifamily buildings with carports at ground level — and so-called “non-ductile” concrete buildings built between the 1920s and early 1970s will have up to 25 years to finish retrofitting. Landlords will be allowed to charge tenants a maximum of $38 per month over 10 years to help pay the retrofitting costs. The city will give property owners seven years to fix wood apartments and 25 years to fix concrete buildings.

Cochran said the key to forging an agreement, which had eluded the city council in years past, was bringing together a broad spectrum of stakeholders.

“What worked this time was we needed to get everyone involved,” he said, referring to owners, tenant groups and engineers. The task force engineers, he said, provided the technical data to evaluate the buildings’ seismic risks.

Beverly Kenworthy, executive director of the Los Angeles division of the California Apartment Association, said the deal allows landlords to pass on to tenants about 50 percent of the retrofit costs.

She said the issue of financing was critical because many of the building owners are “mom and pop landlords” and the buildings are rent-controlled.

The number of wood-framed buildings with “tuck-under” parking spaces is more than 13,000, and the number of concrete buildings about 1,500, according to the city.

Although seven to 25 years doesn’t guarantee that an earthquake won’t inflict damage on these classes of buildings in the near future, Cochran said it’s the best compromise that stakeholders could hope for.

“We in the engineering profession would like to see (the retrofits) done in the next 10 years,” said Cochran, who was president of the Structural Engineers Association of California in 2013 and 2014.

In addition to the high costs that owners and tenants will have to bear, Cochran said the thousands of retrofits could put additional strain on the city’s continual shortage of structural and civil engineers.

He predicted that, as the projects get underway, general contracting firms from the West Coast will use their own licensed engineers to bid on projects, providing he said a “turn-key project” that includes construction and engineering as a way to save building owners money.

Although the engineering task force worked for a year and a half, Cochran said the task force will continue to consult for the city as engineers study new ways to retrofit and diagnose buildings that need work.

Jon Heintz, a program manager with the Applied Technology Council of Redwood City, California, said his nonprofit organization has been working on a new system to analyze wood-framed and concrete structures to determine whether and how much retrofitting will be necessary.

Working with federal grant money, the Applied Technology Council is studying methods that will save cities like Los Angeles, engineers and building owners time and money.

“We’re trying to use all our advanced techniques to develop simplified methods to get a handle on what’s happening on a large inventory of non-ductile buildings,” he said

. The council already has an interim product called ATC 78-3, which is a new methodology for evaluating wood-framed buildings for structural repairs and retrofits. The next phase of the council’s work will focus on concrete buildings, he said.

One of the consulting engineers on the Applied Technology Council’s work is Seattle’s Terry Lundeen.

Lundeen said his firm is using a grant from the Federal Emergency Management Agency to test early findings by the Applied Technology Council’s work on evaluation of structurally at-risk concrete buildings.

The project is on a low-level concrete building in Seattle, which Lundeen declined to name, to see if the council’s new methodology works.

“The end-goal of all of this is to come up with a testing system that gives engineers and policy makers better tools,” Lundeen said. “We’re trying to give people the tools to weed-out the bad actors.”

He said the city of Seattle has been working for five years on an earthquake retrofit mandate that would apply to early unreinforced masonry buildings, but “the jury is still out” on whether there is the political will to get it passed.

Heintz said his nonprofit will continue searching for better methodology to address the dangers of older buildings — work that can be applied in cities across the country.

“We like to think our work will benefit the community at large, not just engineers and contractors,” he said. “It’s really about making the built environment safe for all of us.”