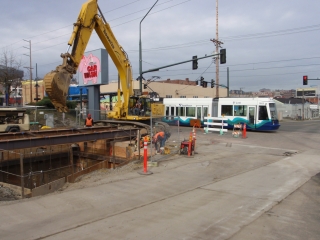 Photo courtesy of Sound Transit [enlarge]
An excavator creates a sewer vault at the corner of A and South 25th streets in Tacoma.

Through the ups and downs of a complicated Sound Transit job, project director Eric Beckman has remained cautiously optimistic.

The word “robust” arises often when Beckman talks about the challenges of the D-to-M streets project, which will link Sounder service between Tacoma's Freighthouse Square and South M Street, where a line to Lakewood begins.

“As problems have arisen, everybody has stepped up,” said Beckman. “Everybody is working well. That's part of where my confidence comes from. We also have a very robust community outreach program.” The community outreach component relates to, among other things, alerting drivers and community members of temporary road closures.

Beckman said he's confident about a late-2012 delivery date for the project — a feat, given that the project started several months late and is only about four months along.

That means the contractor, MidMountain Contractors of Kirkland, worked on certain aspects of the project during the winter instead of the fall — as originally planned.

“What we thought would be the dry season has shifted to the wet season,” Beckman said.

One challenge has been connecting new and old utility lines. Specifically, the existing 48-inch-diameter sanitary sewer and 72-inch-diameter storm drain running down part of South Tacoma Way needs to be relocated because the project lowers the grade of Pacific Avenue. It's necessary to construct a new section for each of the utility lines to the north of where they are and at a greater depth. That requires a temporary bypass in order to keep the pipes operating during the transition. The pipes, not surprisingly, are flowing at a greater capacity than expected since the project is being done in the winter and early spring.

In addition, lowering the grade of Pacific Avenue at South Tacoma Way meant that workers have “encountered a little bit of contaminated soils,” he said. The roads were built with fill, Beckman said, and he expects that workers will have to follow a contaminated soil disposal protocol as the real digging begins this spring.

“There's nothing that creates a health hazard to the general community,” he said.

The bidding process turned out to be problematic and time consuming for Sound Transit. The low bidder, MidMountain, failed to submit the lobbying certification form in its bid. The second lowest bidder, PCL Construction Services, requested that Sound Transit give it the project because of MidMountain's discrepancy. MidMountain appealed Sound Transit's decision and prevailed, but the process was delayed by several months as a result, Beckman said. 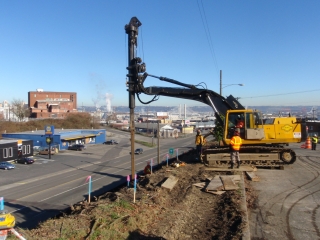 But the bidding environment helped keep costs lower. With the construction industry in a slump, Sound Transit was in a position to benefit from the lower bids, Beckman said.

“We had an embarrassment of riches, in terms of the number of qualified contractors with competitive bids,” he said.

Sound Transit engineers typically estimate project costs on the conservative side to protect against cost-overruns or upward price changes in the market, according to Kimberly Reason, spokesperson for Sound Transit. “Conditions last year, however, led to a drop in construction pricing, which drove down contractor bids,” she said.

For the D-to-M streets project, Sound Transit estimated a cost of $66 million, but the low bid came in at $40.8 million. The project includes, in addition to the new rail, new bridges and reconstruction of several streets. New lighting and landscaping are also part of the work.

Sound Transit has a built-in float, or extra time contingency, for the construction schedule. To make up lost time, Beckman said there is room for accelerating work on the project — in the form of extended worker hours.

“We're looking at opportunities to add personnel and equipment,” he said. “We've brought in crews to work longer days and added production has come out of that. We have a robust contingency in the overall budget to deal with this sort of situation.”

Asked whether longer hours and additional equipment would mean the project could go over budget, Beckman said, “I feel confident we can come in under budget.”

PB designed the project, HDR did preliminary engineering, Berger/ABAM and Herrera did the environmental review, and Harris & Associates is the construction manager.