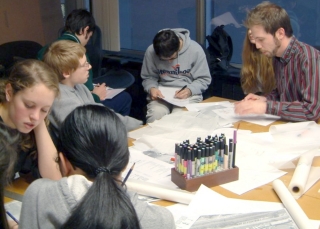 Each year at this time, local construction, engineering and architecture firms find a way to give back.

They participate in the ACE Mentor Program of Washington, which recruits local AEC professionals to help high school students learn about their professions.

Celebrating its 10th year, the program has graduated more than 1,000 students from regional high schools — in a process that involves meeting with professionals, going to their offices and visiting work sites.

The mentor program's strategy, to date, has been to accommodate as many students as possible, according ACE Mentor Program of Washington President Jon Magnusson.

“So far, we have not had to turn anybody away,” said Magnusson, chairman and CEO of Magnusson Klemencic Associates. “The only limit is based on the number of mentors.”

The nearly 200 students last year, representing 39 high schools, is a big leap from the dozen or so students who participated in the program's inaugural year.

The program has made a lasting impact on Hilary Ratliff, who graduated from Inglemoor High School last year and is a freshman at the University of Washington.

Before the mentor program, Ratliff said her interest in becoming an architect was only in her imagination.

“I dreamed about it since elementary school,” said Ratliff. “I have an uncle who's an architect, but other than that I was just reading books in the library about buildings and looking at buildings.”

While there is no shortage of eager students, the recession has made it more challenging to find mentors.

Pete Maslenikov, a project manager with Skanska USA Building, said he has had to work harder during the economic downturn to find mentors for recruiting.

(Editor's note: This story has been corrected to say that Maslenikov works for Skanska, not Sellen Construction.)

“With the state of the economy, that process has been a little more difficult than in the boom years,” said Maslenikov. “We don't have as many people working at the firms, because many of the firms have downsized.”

Mentoring requires professionals to meet with teams of students for two hours every other week, over a 15-week period beginning in mid-October.

“Typically, we introduce the students to each of the disciplines, and then we break into groups,” Maslenikov said. “Students who, for example, are interested in mechanical engineering can work with a mechanical engineer. They really get quite a bit of experience from the program.”

The students can choose from five or six disciplines, and their interests usually are evenly divided between the major disciplines, Magnusson said.

“The program allows kids to make an informed decision on what field they want to go into prior to college,” Maslenikov said. On rare occasions, after the program a student might decide against going into any of the disciplines. But more often, they zero in on a specialty, which they pursue in college.

“The biggest benefit is getting exposed to the disciplines,” said Magnusson. “It's much like a Junior Achievement program.”

During the program, students are asked to design a hypothetical project. Last year, they had the option of designing a youth hostel, an experimental high school or a mixed-use building. They went with the youth hostel, which was to be located at Seattle Center near the Space Needle.

Maslenikov said one inventive design included an atrium and preserving parts of the outdated Fun Center's games and rides. During a final session, students were given two hours to demonstrate their designs with CAD drawings and models.

“The program is so open-ended and it allows them to get very creative with their designs,” said Maslenikov. “They often come up with different solutions than what industry professionals do.”

The mentor program also raises money each year to help pay for college through a scholarship breakfast. Since 2001, the event has raised $243,000.

Having been president of the program since its inception, Magnusson said he's seen mentors build lasting relationships with the students, and in some cases the students go on to work at the mentors' firms. One student even became a mentor.

In addition, mentors have the benefit of networking with each other to help find out about collaborating with each other's firms. Magnusson noted that Dan Nelson of Tiscareno Associates has played an important role in the last decade of finding mentors.

The program centers on the students' experiences. “There's a lot of demand from students for the program because they see the value of the program as they go into college,” said Maslenikov. “It allows kids to make informed decisions.”

While neither Magnusson nor Maslenikov had formal mentors, Magnusson said he was lucky to have a father who looked after him and wanted to see him succeed in his career. “I had a mentor in my dad,” he said. “He was the chief estimator for Sellen.”