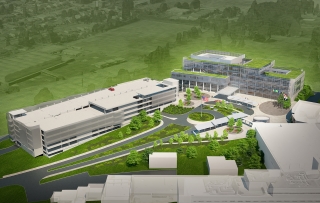 “You look downtown and see all the tower cranes, and everyone is very busy,” said Earnest, the Pacific Northwest regional executive for Clark, whose Seattle office is at 701 Dexter Ave. N.

Clark Construction Group has 2,400 employees. Its corporate office is in Bethesda, Maryland. Besides Seattle, its other regional offices are in Tampa, Chicago, Houston, San Antonio, San Diego, Irvine and San Francisco.

Atkinson Construction, a division of Clark Construction Group, has operated in Seattle for more than 60 years. It focuses on heavy civil work such as roads, bridges, mines and tunnels.

A month ago, Clark broke ground on the seven-story mental health and research facility in the Beacon Hill neighborhood for the U.S. Department of Veterans Affairs.

The building will have a protective curtain wall designed to withstand an explosion, and a metal panel facade. The interior will have 203,000 square feet for mental health services and research, along with offices and labs. 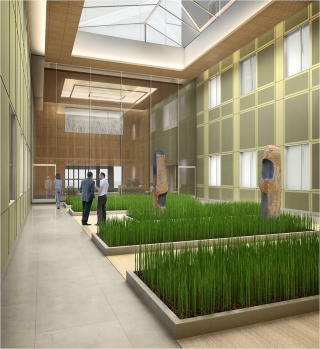 [enlarge]
The Seattle VA complex will have two 800-square-foot landscaped courtyards inside.

Existing utilities will be tied into the new building, and there will be extensive grading and hardscaping as part of the $108 million contract Clark was awarded.

Stantec and The Design Partnership designed the complex. Stantec is also the mechanical engineer, Degenkolb Engineers is the structural engineer and Sparling is the electrical engineer.

The project is targeting LEED silver, with sustainable elements that include an atrium with skylights and two interior courtyards.

Across the country, Clark is working on the VA replacement hospital in New Orleans and recently completed the Syracuse VA Medical Center addition in New York, and the VA Las Vegas Medical Center.

Locally, Clark and Atkinson in January completed a bridge and fencing to allow the new Boeing 737s to cross over a creek at the south end of Lake Washington to get to the Boeing Renton plant airfield.

Earnest said Clark had an office on-site when it worked on the 14-gate South Terminal Concourse at Sea-Tac Airport, a $280 million project completed in 2004.

But this is its first full-time Seattle office. Earnest heads up the office, which has a staff of 12, and hires subcontractors for much of its work.

Earnest most recently managed projects out of Clark's San Francisco office, and has done that work for Clark in Los Angeles and Washington, D.C.

Two years ago, he began exploring whether Seattle would be a viable market for the company. This was about when the Seattle seawall work was being bid and San Francisco hedge-fund manager Chris Hansen announced a proposal to build an arena for professional basketball and hockey teams in the Sodo neighborhood.

He said there are a lot of good contractors here, but he expected projects put on hold during the economic downturn would “sprout up at one time.” He said Clark could get some of that work, as it did not slim down in the recession, and get jobs other contractors were potentially too busy to handle. 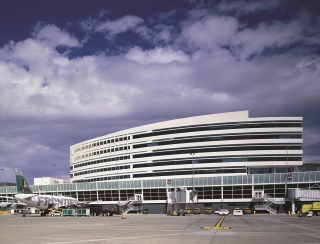 [enlarge]
Clark worked on the $280 million South Terminal Concourse at Sea-Tac Airport. It was finished in 2004.

Clark also counted on its groundwork for jobs such as the VA Beacon Hill would pay off, he said. “It was a little bit of a bet we took.”

Earnest said he expected that between 2014 and 2017 a lot of work would open up in Seattle because of huge job growth, infrastructure investment and a growing and highly educated population.

Also, he said, Clark Construction Group is one of the top national firms in design-build and general contractor/construction manager delivery methods. He said it expects to get some of those projects in Washington as the state in the past few years has opened the doors to alternative project delivery. He also said there are a “ton” of higher education projects in Washington.

It's been “a little more difficult” to find the right opportunity in the housing and office markets here, he said. Private development is relationship-driven and “us being new or somewhat new to the market, we just don't have those relationships,” he said.

However, Earnest said, Clark plans to leverage its national and newly formed local relationships in those markets to try to get work here.

Clark is also looking to build hotels in the area.

Across the country, it is working on McCormick Place Headquarters Hotel in Chicago, Marriott Hall in San Diego, and 400 E Street in Washington, D.C. It recently completed Hilton Garden Inn Alexandria Old Town in Alexandria, Virginia.

Earnest said he hopes developers will “give us a shot” when they see Clark's local Boeing and VA work.

Clark builds stadiums around the country. That includes current work on McCormick Place Event Center in Chicago and the LAVCC Athletic Training Facility in Los Angeles, and the completed Rose Bowl renovations in Pasadena, California, and Nationals Park in Washington, D.C.

“We certainly hope that a stadium comes to Seattle because we're sports fans and we love to build stadiums,” Earnest said.

Getting the convention center addition and International Arrivals Facility jobs would give Clark “a five- to seven-year running start” while it tries to get other projects, he said.

If it lands those jobs, Earnest said Clark could team with Atkinson on the Sea-Tac project and the convention center addition. He said it could also work with Atkinson if it gets housing projects near Sound Transit stations.