Office sector: Light at the end of the tunnel

We carefree Seattleites have a very resilient way of dealing with pain, as long as we know the pain resides in the past. Whether it’s the WaMu bankruptcy, the Sonics leaving town, the latest political cycle, the 2008 Washington Huskies’ 0-12 football season, or even the current recession, all seem to be manageable as they become figments of our memory and we shrug it off to experience. The uneasiness comes when we are experiencing pain with no end in sight.

The same is true for the commercial real estate market, which for several years was muddled in the middle of a painful run with no apparent relief in sight. However, 2010 has proven to be a turning point where we all trust that the past throbbing has been cured and brighter days lie ahead. To underscore our claim, we offer the following events and trends as clear signals that commercial office is now indeed coming out of the tunnel:

• Flight to quality is alive and well. More than 660,000 square feet of leases have been completed in 2010 for tenants relocating into new A-plus buildings like West 8th, Russell Investments Center, 1918 Eighth Avenue and 2201 Westlake. These are due at least in part to tenants realizing that the bottom of the market was behind them, and 2010 represented a great opportunity to upgrade their existing office environment to help attract and retain this region’s finest talent.

• Distress is being worked out. Waiting for the next shoe to drop creates anxiety and uncertainty, which leads to market-wide paralysis. For the last several years, this uncertainty surrounded distressed real estate and the magnitude of the potential downturn that was staring us in the face. As it turned out, primary lenders and owners were able to quietly work out their contractual obligations without a significant amount of troubled assets trading at distressed prices.

For example, it was reported that the 76-story Columbia Center was able to extend its loan to 2015 from the bondholders to Beacon Capital Partners, which owns the building. This workout is fairly typical of what is happening with commercial real estate debt around the country.

For those troubled assets where lenders did have to step in, such as portions of the well publicized $600 million Mastro portfolio, the lenders have been able to successfully foreclose on a majority of these properties and take them to the market with predictable results, while not undercutting the market. 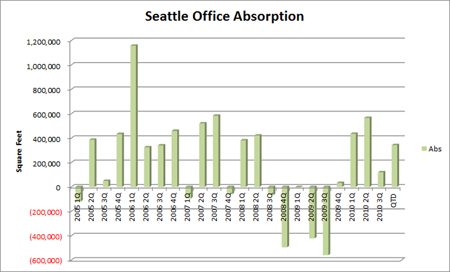 Images courtesy of Pacific Real Estate Partners/data provided by CoStar Group [enlarge]
Absorption in the Seattle office market rebounded strongly in 2010, after having experienced negative absorption in five out of the six quarters leading up to this year.

• “Renewals and blend and extends” are no longer automatic. During much of 2008 and 2009, in both Seattle and Bellevue, landlords made it nearly impossible for their tenants to relocate by beating the rental rates and concessions offered by other prospective landlords. Therefore, new developments and existing buildings with extensive vacancies saw an abundance of activity through tours and proposals, but at the end of the day, they lost the tenant to a renewal with their existing landlords.

However, as market conditions have improved for both Class A and B office space in Seattle and Bellevue, the difference between the costs of renewing and relocating has tightened. This is because the desperation that existing landlords had felt to retain their tenants has diminished somewhat, creating a more balanced playing field on which a relocation has become, in some circumstances, just as economical as renewing.

• Induced tenant activity. The Seattle CBD currently has more than 800,000 square feet of tenants that are testing the office-market waters with leases expiring in 2013 or later. Tenants realizing that the bottom of the market has come and gone are now trying to either negotiate with their existing landlord to structure a new, long-term deal that enables them to take advantage of the current market conditions, or find a landlord willing to assume their current obligation in exchange for their tenancy.

Additionally, with no speculative office buildings under construction, tenants realize that the newest buildings with vacancy will be the only first-generation product to choose from until the next wave of development occurs. So, for large tenants with leases expiring in 2013, now might be the only time that they can relocate, given potential space availability constraints in Class A space.

• Speculation is back. Last month, Trammell Crow Co. announced plans to start a 1 million-square-foot office tower in Chicago; and Seattle won’t be far behind with similar announcements. Local developers such as Touchstone and Washington Holdings are buying land and preceding with land-use applications, so the next wave of development is in the pipeline.

Developers are not as focused on current market conditions as they are in the anticipated market three to four years away, reflecting the time these projects take to complete. As the eternal optimist, a developer can create a compelling narrative that forecasts a market vacancy rate of below 10 percent by 2013 with delivery of the next new office buildings in 2014-15.

• Abundant capital is driving cap rates to near-historic lows. Several mega-deals took place this year: Principal Investors’ acquisition of The Bravern complex in Bellevue for $548 per square foot; Cole Property Trusts’ acquisition of the City Center Plaza for $531 per square foot; and the suburban Advanta Office Commons purchase by JP Morgan Asset Management for $377 per square foot. All those properties sold for a combined total of almost $1 billion, and each traded at a cap rate of approximately 6.4 percent to 6.8 percent, as reported by CoStar. Those mega-transactions set the stage for smaller acquisitions at a similar return for investors.

The Pacific Northwest has proven once again to be a primary target for aggressive investors looking for a safe haven for their investment dollars. So look for the continued aggressive pursuit of stable asset acquisitions on the horizon.

• Net positive absorption. Downtown Seattle’s Class A and B market has come back with a vengeance, with almost 1.5 million square feet of net positive absorption reported through September. Although Amazon.com’s partial relocation has been a significant contributor to this number, the market is still feeling the impact of small growth segments within the technology sector.

Downtown Bellevue, on the other hand, has very few availabilities over 50,000 square feet, so large amounts of absorption are not forecasted, as the space simply does not exist to absorb. 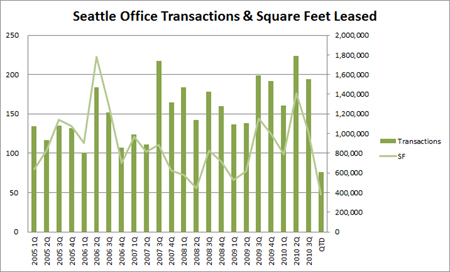 [enlarge]
Although office tenants are not leasing as much square footage as they were during the height of the market in 2006, office-lease transactions in Seattle are happening, as evidenced by the high transaction volume in both the second and third quarters of this year.

• Tenants position themselves for growth. During the downturn, tenant requests to landlords were primarily for downsizing their space, short-term extensions, subleasing a portion of their existing office suite, or closing the doors completely. Those days are gone.

Today, typical lease negotiations involve expansion options on adjacent space, or space pockets that defer rent on a portion of the space for 12 months as the tenant hires new employees. Tenants are looking for unencumbered buildings that allow them to expand as their business grows, which is a clear sign that business optimism has returned.

• Ten-year leases have become the norm. In 2008 and 2009, landlords were commonly extending a tenant’s lease for one to two years as they both sat in a wait-and-see mode. Out-of-town corporate headquarters were dictating to their Seattle-area branches that no new leases were to be executed, with only short-term renewals acceptable. In 2010, this restriction appears to have been lifted, with many leases being signed for 10 years or more. Positive attitudes and business optimism seem to be present, which is a great bellwether for the local economy.

These indicators are a clear sign that the worst of the downturn is behind us as we enjoy the forward movement that seemed so very far away just a few months ago. Many factors will determine the speed at which we proceed, although we can all agree that the pain that was suffered in 2008-09 is still easy to remember, but becoming less significant all the time.