As we continue to make our way out of the lingering fog of the recession, one thing has become clear: This economic crisis is unlike any we have ever faced. When we finally do emerge on the other side, what consumers value and how companies do business will both be fundamentally changed.

Nowhere will this “new normal” be more palpable than in the residential real estate market. In order for multifamily real estate investors and owners to succeed and maximize value, they must be able to understand and take advantage of shifting demographic and economic trends on the horizon.

Although the recession was officially declared over more than a year ago, the for-sale housing market continues to struggle — due in large part to continued unemployment, foreclosures, standing inventory, added restrictions on mortgage loans and, perhaps more importantly, consumers’ general lack of confidence in the value of home ownership. This set of circumstances has, in turn, favorably impacted the rental market.

In fact, according to an October 2010 report released by Prudential Real Estate Investors, apartments are the sole silver lining in the commercial real estate market. The report notes: “Apartments have been the first of the traditional segments of the commercial real estate market to show positive occupancy trends in the wake of the steep recession that ended in mid-2009. Just about all metrics of apartment fundamentals have improved in recent months.” 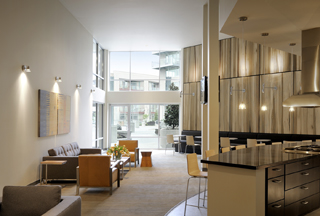 Photos courtesy of Security Properties [enlarge]
On the Park, a 268-unit apartment in Ballard, offers residents a club room with kitchen for entertaining guests.

Here locally, the numbers bear this out. According to a recent report by Dupre + Scott, a local apartment market research firm, the Puget Sound region’s rental market is showing marked signs of improvement with the vacancy rate at 5 percent — down from 6.3 percent in March and more than 7 percent at this time last year. As vacancy rates decrease, rental rates have been inching up. Rents in the Seattle area are now averaging $957 compared to $945 in March of this year, the first time rents have increased in two years.

Multifamily owners, investors and developers will be best positioned to capitalize on this growing market if they take the time to understand and anticipate the needs of today’s shifting renter base. What renters value today has changed dramatically from just a few years ago and will further evolve as Baby Boomers and Gen Yers, those born between 1977 and 1995, continue to age and broaden the rental market demographic pie.

What does the new normal look like? Not surprisingly, for a growing segment of the population the American Dream no longer includes home ownership. According to a recent survey conducted by Harris Interactive, 76 percent of respondents now believe that renting represents a better option than buying in today’s real estate market. Perhaps even more remarkable is that 78 percent of those respondents own homes.

Many people today are simply rejecting the commitment that comes with owning a home, regardless of their ability to afford one. Older Gen Yers may not necessarily want to be tied down to a particular zip code should they choose to relocate or change jobs. And their empty-nesting parents, the older Baby Boomer population, also want to keep their living options open as they approach retirement, whether they decide to travel or simply forego the responsibility of home ownership altogether. Flexibility is key, and apartments offer just that. 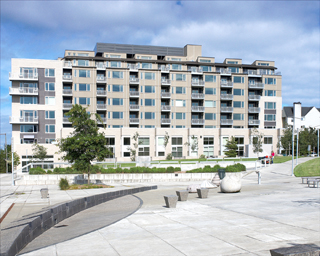 [enlarge]
On the Park is adjacent to the new Ballard Commons Park.

In addition, the recession has made consumers understandably more cautious with their money. They are “de-leveraging” to increase their financial security by paying down debts such as credit cards or school and car loans and saving more than ever before. Some are wary of putting money down on a home given uncertainty as to whether prices have indeed hit bottom. Others are choosing addresses over home ownership, opting to rent and build a nest egg in their preferred neighborhood where purchasing may be too cost-prohibitive.

And finally, across generations, the lifestyles people value have changed. Downsizing isn’t just for Baby Boomers anymore. Today, many people are embracing a “less-is-more” attitude. The McMansion they could own in the suburbs is not nearly as appealing as the in-city apartment surrounded by cafes, shops, transit options and other amenities.

To capitalize on this trend and attract this new generation of renters, building owners and developers are adding more sought-after community amenities to their apartment projects, and designing more flexible floor plans that allow residents to configure their homes to fit their unique needs.

Many of Security Properties’ apartment developments have shared building amenities that serve as an extension of residents’ living spaces, including fitness centers, community dens, intimate movie theaters or club rooms with kitchens for entertaining guests.

If freedom, financial security and changing values are among the reasons today’s consumers are choosing not to buy, where are they choosing to rent? We believe multifamily rental properties will continue to perform best in amenity-rich, 24-hour walkable neighborhoods.

According to Urban Land Institute’s 2011 Emerging Trends Report — which ranked the apartment sector as the first choice for investment and development prospects — investors should “place (their) bets on locations closer to the core.”

This is certainly true for Security Properties’ portfolio. Our target investment markets are in 24/7 global gateway cities primarily on the West Coast with strong employment growth and a variety of transit-oriented, mixed-use neighborhoods. Here in Seattle, our 130-unit Epicenter community is located in the heart of the Fremont neighborhood, just minutes from the downtown core. Completed in 2005, the apartment building has a PCC Natural Market, as well as several cafes at street level. Today, its occupancy rate stands at an impressive 98 percent.

And one of our newest apartments in the city, On the Park, is also strategically located in a close-in urban area — the revitalized Ballard neighborhood — and offers access to shopping, restaurants and recreation. Adjacent to the new Ballard Commons Park, the 268-unit building opened earlier this year with apartments above a 40,000-square-foot, 24-hour QFC store.

According to Dupre + Scott, vacancy rates are projected to continue to decline in the Puget Sound region to nearly 3 percent in 2015. Moreover, in 2011 only 2,000 new units will enter the Seattle area market — a 40-year low in production levels — and there are only 3,000 in the pipeline for 2012.

Compare those figures with the number of new residents in Seattle — Urban Land Institute reports that the Seattle area has seen an influx of 160,000 new residents since the recession — and it is evident that the city is one of the best markets in the U.S. for multifamily rental investment.

Demographic trends, shifting lifestyle preferences and limited supply will continue to bode well for apartment investments and developments, both in the short and long term. However, only those apartment owners, investors and developers who are experienced, diversified and nimble will be best positioned to thrive in today’s ever-changing marketplace.

We strongly believe in the continued positive performance of the rental sector, and plan to aggressively expand our portfolio by investing in and developing both market-rate and affordable properties that meet the growing demand for quality, well-located apartment communities.

John Orehek is president and CEO of Seattle-based Security Properties, a 40-year-old real estate investment and operating company. As one of the largest owner-operators of multifamily real estate in the country, the company has acquired or developed nearly 64,000 conventional and affordable housing units spanning over 440 properties in more than 30 states.