Industrial market inches toward a bright 2011

As 2010 draws to a close, the Puget Sound industrial market is showing signs of improvement. The market is moving ahead — more slowly than most would like — but still moving in the right direction.

When commenting on the present state of the market, and where it may be headed, it’s only fair to recall just how deep the effects of the recession hit. Primary drivers — imports/exports, transportation, freight and retail demand — all faltered significantly beginning in 2008 and lasted until earlier this year. Even now, real, measurable job growth has yet to take root, and most credible forecasts call for a lengthy period of sideways movement before conditions improve.

Still, there has been good news: fears of a double-dip recession have seemingly evaporated, and the state’s unemployment rate (unchanged in October from the month before) remains measurably lower than the national rate. According to Moody’s Economy.com, year-over-year job growth is forecast to climb nearly 5 percent by 2012, led by the high-tech and manufacturing sectors — critical players in region — which are expected to grow considerably by 2014.

A look at area industrial properties shows likewise. True, the industrial market is considerably less healthy than it was before the recession, but it is stabilizing, nonetheless.

After climbing steadily throughout the past two years, the industrial vacancy rate across the region remained flat, closing at 9.8 percent in third quarter 2010, down 40 basis points from where it measured at the beginning of the year. At nearly 300,000 square feet in the positive, third-quarter absorption was strong and brought 2010 net absorption up to nearly 1.2 million square feet, most of which has been reflected in the warehouse/distribution sector. 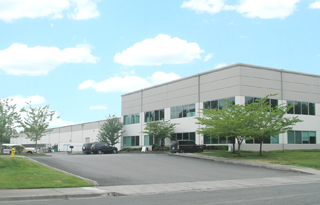 Photo courtesy of Grubb & Ellis Co. [enlarge]
A deal for the 480,000-square-foot Valley Distribution Center in Renton is expected to close this month.

Asking rents for industrial space throughout the region were essentially unchanged during the third quarter and are expected to increase slightly heading into 2011. Even rents that remain flat or increase only slightly are somewhat of a welcome sign, considering how sharply and consistently they had fallen in the previous six quarters.

Actual rate hikes remain at least a couple quarters off, but if rents remain flat (or even slightly tick up) during the next few months, struggling landlords with serious cash flow pressures may gain some breathing room. Landlord concessions such as free rent and heavy tenant-improvement allowances are expected to remain in place but decrease in 2011 when compared to the 2010 levels.

The absence of projects in the development pipeline should help the market continue to stabilize in the quarters ahead, potentially serving as a crutch until job growth and general economic conditions improve enough to reintroduce a robust demand for space.

The investment market picked up significant activity in the third and fourth quarter of 2010. The strength of the Puget Sound industrial market when compared to other national markets, coupled with the scarcity of buildable land in our region’s prime industrial markets, has put our market on the top of many institutional investors’ lists to acquire more property.

In the region’s largest industrial sale of the year, the James Campbell Co. sold Greenriver Corporate Park and Southcenter South Industrial Park, totaling about 940,000 square feet, for $63 million to RREEF in October.

Cap rates for core product appear to be in the 7 percent range and may drop even more as investors continue to feel the pressure to place money.

The stage is set for a better year ahead for the industrial market in Western Washington, but improvement will arrive slowly and moderately. Increased demand by tenants and owner-occupiers, along with a development pipeline that remains frozen, should help landlords ride out what will remain of a market set to become slightly less tenant-friendly.

Net absorption will continue to improve, and occupancy levels will climb throughout the year. If the second half of 2010 is any indication, space options for larger users will dwindle as tenants position themselves to take advantage of their remaining negotiation leverage. Even smaller tenants who have had a glut of low-priced spaces from which to select will begin to see their options narrow as 2011 draws to a close.

As the market turns and a more landlord-favorable leasing environment materializes, asking rents will plateau and then rise.

Future changes in market conditions will primarily be driven by changes in demand for space and general economic conditions. The market’s recovery will get an assist from the absence of addition to the supply side. A blueprint for a more positive 2011 already exists: positive net absorption, increased rental rates, fairly aggressive return by investors with capital to spend, and a small decline in vacancy rates.

A year removed from seeing its vacancy rate spike, the Puget Sound industrial market plodded through 2010 and experienced marginal improvement; 2011 should be better.

Bill Condon is executive vice president and managing director of the Grubb & Ellis Seattle office. He specializes in leasing and sales of industrial properties in south King and Pierce counties.