Apartments have been bouncing back in most submarkets around the Puget Sound since the first quarter of 2010. According to data from Dupre + Scott, vacancy for the tri-county area has already returned to normal at 5 percent, from the third quarter 2009 peak of 7.2 percent. Around the Puget Sound region, we have seen concessions fall off dramatically, and the rental market recovery is firmly under way.

Rental income has not increased enough to cause values to return so quickly. Cap rate compression is the key here. The average cap rate for King County sales this year is 5.55 percent versus last year’s average 6.87 percent cap (average 6.46 percent over previous 10 years). Cap rates will continue at these historically low levels in the first half of 2011. However, there is a strong correlation between cap rates and interest rates. Interest rates cannot stay this low forever, and some cap rate decompression is likely to follow.

Not surprisingly, apartment sales essentially froze when values dropped. On average, 61 apartment buildings with 50 units or more have sold every year over the past 10 years in King and Snohomish counties, and the apartment sales volume record was set in 2005 at 138. In 2009, there were just 10 sales, and so far in 2010, there have been just 18.

We predict that sales volume will increase dramatically in 2011 as more sellers come to market to take advantage of current cap rate compression.

The supply-demand curve has already begun to shift back in the landlord’s favor, and tenants can expect their rents to rise significantly over the next three years. Supply will remain relatively flat for the next couple years, but demand will grow — outpacing supply into 2013.

More units were delivered in 2009 and 2010 than usual (5,752 and 4,096 respectively), but the new development pipeline has cleared out considerably. Just 1,773 units are under construction and/or planned for 2011 with another 2,400 units in the planning stages for 2012. The prior 10-year average is 2,915 new units per year. New development will start ramping up, but supply will still lag well behind demand for rental housing into 2013. 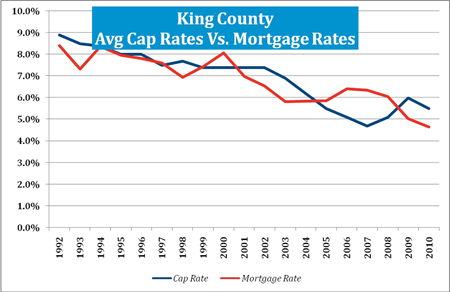 Image courtesy of Colliers International [enlarge]
Historically, cap rates and interest rates are closely related. Interest rates are now at historic lows; when they start to rise, some upward pressure on cap rates will likely follow.

Supply may be fairly flat, but demand is on the rise and will contribute to a rental market that heavily favors landlords. Three factors will drive demand and growing rents over the next several years:

1. Recovering employment. Unemployment was the main factor that dried up rental demand and caused rents to fall 15 percent to 20 percent peak-to-trough in many cases during this downturn. Historically, when unemployment rises, demand for apartments drops, and that certainly appears to have happened here. Unemployment is still hovering in the 9 percent range. As unemployment recovers over the next several years, demand will grow dramatically.

2. A shift to renting versus buying. In the 2000 census, 36 percent of Puget Sound households were renters. At the peak of the housing bubble, it is estimated that just 32.5 percent of households were renters. In 2010, the percentage of renters in Puget Sound has returned to 35.7 percent. Foreclosures and lack of available credit are forcing some households to rent rather than own. However, a changing demographic and a change in mind-set are leading more households to choose rental housing. A growing number of baby boomers and other households that traditionally own are choosing to rent as a means of simplifying, or are opting out of purchasing in an uncertain economy.

3. Generation Y will drive demand. The biggest generation since the baby boom is reaching an age where they are entering the rental pool. Some 90,000 of them turn 22 in the Puget Sound over the next seven years. As a result, Seattle’s pool of renters will grow faster than it has in decades.

Dave Schumacher and Joe Levin of Colliers International specialize in the sale of multifamily investments in the Puget Sound area.