I was recently asked the question: Does commercial building operations and maintenance change during a weaker economy? The answer: Not as much as one might think. However, there is significant pressure to keep operating costs as low as possible.

These are challenging times for commercial real estate. Values have dropped by 35 percent or more locally in the last two years and by more than 40 percent nationally. Job losses and other factors have driven office vacancies in Seattle to 20 percent and lease rates are down by a similar factor. Many commercial properties that were purchased in the past few years are carrying mortgages greater than the current market value of the real estate. The number of loans that are in default are on the rise, as is the magnitude of the delinquencies.

With these financial pressures on investment real estate, reducing operating costs is a goal of all management teams. While there are savings to be realized, real estate professionals, specifically property managers and building engineering and maintenance personnel, are already quite effective at keeping building maintenance costs stabilized. Therefore, further cost reductions are sought but often are not the opportunity that they might seem.

Certainly, lower occupancy during a weaker economy can save some costs. Unfortunately, these savings don’t begin to offset the magnitude of the negative revenue impacts during periods of higher vacancy. 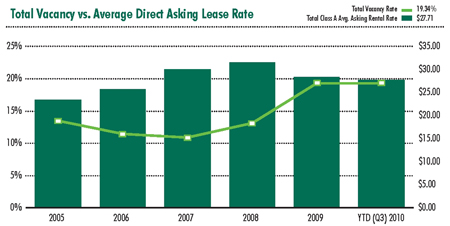 Image courtesy of CB Richard Ellis [enlarge]
Job losses and other factors have driven office vacancies up to nearly 20 percent in Seattle. Lease rates are down by a similar factor.

Deferring maintenance to save money in the short term doesn’t pay. Professional managers don’t defer maintenance even in a weak economy because it only leads to energy inefficiency, greater operating expenses and the loss of tenants down the road.

Some savings in operating expenses are being achieved by working with building service providers, but this must be balanced against an understanding that tenant retention is as important as ever.

The principle that the cost of keeping a tenant is less than getting a new one applies to leasing just as much as it does to other types of sales. Cutting corners only leads to disappointing the very tenants a strong management team works so hard to keep and attract.

More proactively, managers will work with tenants in every way possible to help them succeed and stay in business. As an example, in a down market when a tenant reduces the amount of space within a property, the owner oftentimes will take the revenue loss and not lease space adjacent to businesses that will need the expansion space once the economy improves.

In office buildings around the United States, energy costs are generally the largest expense in the operating budget, though here in the Pacific Northwest, it is the second-highest operating expense due to our hydro-based power system. Therefore, capturing every energy-efficiency opportunity has been and continues to be a primary focus in reducing operating costs.

It is the cost savings during any economy that drives the adoption of energy-efficiency measures. It is also the culture of Seattle real estate owners and managers to be supportive of environmental stewardship.

Skilled managers and building systems engineers have already taken such steps as resetting heating and cooling control systems for vacant space, maximizing shading to reduce cooling loads, reducing elevator operations as long as it does not impact tenant needs, reducing lighting levels in low-traffic areas, and adjusting and optimizing building systems that use energy.

Building operators are also asking their vendors for help, not just in the pricing of their contracts, but also to report savings opportunities that they might observe while providing their services and products at the site. Tenants are being asked to partner by lowering plug loads (turning off equipment not being used).

During the energy crisis of 2000-01, we learned that building managers working with their tenants were quickly able to reduce electricity consumption through plug-load reductions by as much as 10 percent.

Those building owners and managers that still have energy-efficiency opportunities to capture, but have limited access to capital, should consider capital projects that have shorter payback periods of one or two years. All managers seek to capitalize on incentives being offered by local area utilities. In some cases, the owner and the contractor are sharing in future cost savings by partnering on the upfront costs as a way to make the efficiency upgrades now.

While deferring regular maintenance during an economic downturn needs to be avoided, deferring some capital projects is a consequence of the weak economy. The management team working with the ownership must decide which capital projects are essential and which can be delayed. Good teams plan for down markets, especially when forecasting capital improvements years in advance.

Adding to this challenge is the contraction of available capital in the lending markets and the impact of government mandates that compete for scarce capital dollars. One example of many is a new requirement that all high-rise office buildings install luminous markings in all exit stairways, which can cost as much as $500,000 for a 50-story building.

In order to remain competitive, building owners who have the financial resources should invest capital reserves during a weaker economy in order to keep their properties fresh and attractive to tenants. Owners with their own financial resources or access to lending should seek to improve building systems and upgrade common space and building amenities. This also positions a property to better capture new tenants once a recovery begins.

Because of these economic conditions, professional and efficient management becomes even more critical. A strong, experienced management team is usually a property’s most significant asset. This is evidenced by the fact that when a property is purchased the new owner often asks the existing management team to stay with the property.

It is a well-trained management and engineering team that is the key to success in both strong and weak markets. Does commercial building operations and maintenance change during a weaker economy? Not if there is a great team behind them.