Seattle and some of its neighboring cities have seen a resurgence, and in some cases, a rebirth of vibrant neighborhood retail districts.

And this steady growth is not limited to Seattle. Mill Creek Town Center, in addition to the downtown areas of Edmonds, Kirkland, Redmond and Issaquah, have also had their pedestrian-oriented retail centers mature and bloom.

We all have seen successful mixed-use projects with vibrant, highly engaged retail that thrives, complements the building with amenities for the tenants, and/or attracts an active pedestrian street life. But we’ve also seen mixed-use retail disasters, even in these aforementioned neighborhoods, and certainly outside of these successful centers.

Some of the most common disasters: ground-floor commercial space in mixed-use apartments or office buildings that are vacant, never leased, or converted to residential; buildings that have small, inexperienced retailers that don’t keep normal hours; or projects that dedicate valuable retail space to unsightly storage or quasi-office uses.

I’ve been working with developers for 22 years on mixed-use projects in many of these neighborhoods, and know how to successfully design and lease these spaces. Some of these tenants have made it through these entire 22 years. What’s the secret to retail success in mixed-use projects? How do you make retail work in neighborhood centers? Why do some neighborhood retail centers work and grow, while others are stagnant?

Here are some key strategies to consider:

1. Look long and hard at your location. It is very difficult to create a retail neighborhood out of thin air. If your project has no existing retail across or down the street, or otherwise near your location, the probability of creating vibrant retail on your project is low.

Pedestrian-friendly urban retail needs the synergy of other neighborhood retail to thrive. Consider dropping the retail altogether, or using other methods to achieve your desired height or density if you don’t see retail succeeding. The old saying, “If you build it, they will come” does not apply to retail spaces located in the middle of nowhere.

For example, Seattle’s retail vacancy rate is generally 2 percentage points lower compared to south King County — in 2008, it was 2.81 percent versus 5.29 percent, and in mid-year 2010 it was 5.04 percent versus 7.55 percent — partly because Seattle’s neighborhood retail is better designed and integrated into mixed-use buildings, while single-use buildings on isolated strips are more predominant in south-end retail.

2. Design your retail space for retail. The physicality of your space really matters. Retail wants excellent ceiling height, with 12 to 14 feet preferred. Retail likes to be flexible on size, too. A typical benchmark is 1,000 to 1,500 square feet for small neighborhood, soft goods retail, and 1,200 to 2,700 square feet for neighborhood cafes and restaurants. 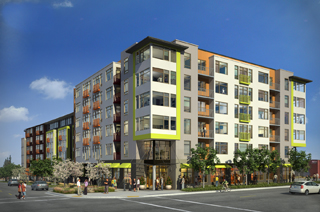 Corners should be reserved for retail. If you have a thin retail district, keep the retail limited to small areas that can be divided into individual, 1,000-square-foot spaces. Granted, drugstores, specialty food retail, and hardware stores can go larger, but they have specific needs — such as parking and loading — and command lower rent. These conditions make them harder to fit into mixed-use neighborhood projects.

Our retailers also need electricity, HVAC and restrooms. Restaurants want natural gas and require venting needs be met in the building. Awning details, signage guidelines, exterior lighting, landscaping near the retail, and storefront glazing all matter, and should be addressed in the design process. One size does not fit all when it comes to retail storefronts. Tell your architect and builder to allow for some creativity from each retailer on the outside of your building.

3. Market your retail from day one. Buildings with vacant retail spaces look, well, vacant. Buildings with occupied retail spaces, on the other hand, look full and alive. Whether you are marketing apartments, office, or hotel rooms above, you want your building to open with full-tenanted retail. This is incredibly difficult to pull off unless you are working with prospects from the beginning of construction and make it a priority.

4. Set realistic market rates and provide TI allowances. It does no one any good to market your retail at unachievable rents and below-standard tenant-improvement allowances. Your retail will sit empty. If you are in a 50-yard-line location, then you can hold out, but we’ve all seen empty retail in prime, central locations.

What is actually achieved by letting your retail sit empty, waiting for a higher rent? The financial key in retail leasing is generally to have the tenants succeed and, in turn, to renew their leases after the first five years. Turnover with the loss of rent, new tenant improvement dollars and new commissions take years to pay back.

One year of lost rent while waiting for a dream tenant and a dream lease rate is something that landlords generally never get back.

The bottom line is this: Look for tenants you think will succeed in your location, and establish relationships with your retailers. What tenants need is operating capital, experience, passion and infrastructure support from an organization or family, not to mention the landlord. They also require developers to have an understanding of what their customers really want.

For example, the Matador restaurant works in Ballard, but it also had a great shot at working in West Seattle and Redmond. Fresh Bistro in the Mural Apartments building in the West Seattle Junction neighborhood had its start as a catering company in Admiral Junction. The point is, they know their customers.

Chaco Canyon Cafe started in a small, lower-floor space in the University District, moved down the street to the Helix Apartments project, and is soon opening its second location in another Harbor Properties project — Link Apartments in West Seattle. Harbor developed and sustained a working relationship and trust with this retailer, and the results have been predictably successful.

None of this is easy, quick or automatic when it comes to developing retail spaces that work in urban mixed-use buildings. But taking a thoughtful, strategic and sustained approach to retail can provide a vibrant, pedestrian-oriented element to most any neighborhood mixed-use project.

As president of Ewing & Clark, Tom Graff has more than 22 years of commercial sales and leasing experience, completing some 500 real estate transactions. He specializes in downtown Seattle investment and retail properties. He also manages the downtown office, which has more than 20 agents and administrative staff.