By AARON LAING
Schwabe, Williamson & Wyatt
Since the inception of growth management in the Puget Sound 20 years ago, local policymakers and community stakeholders have wrestled with how to move toward a less auto-oriented landscape.

Transit is often heralded as a panacea, solving environmental and social problems alike. Transit options, however, may be impractical for and inaccessible to some, as the focus on job commuters ignores broader transportation needs, especially for families.

Efforts to bring commuters to transit through transit-oriented development (TOD) may begin to address some of these issues, but TOD is not a panacea either. Policymakers should recognize that change is necessarily incremental and that efforts to ameliorate the impacts of moving toward a less auto-oriented community are as important as making the changes themselves. 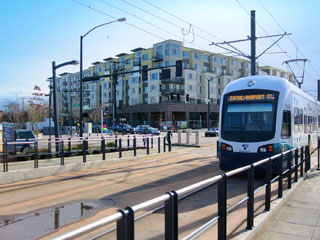 First, there are key differences between Seattle and acclaimed transit-oriented cities like Copenhagen and Stockholm, most notably its density and topography. Seattle is a hilly, wet city with about half of the population density of these oft-touted examples of what Seattle should be from a transportation standpoint.

Increased density is needed to support major infrastructure investments, both from a tax base and user base. While policy choices may encourage density near transit, we may not see similar population density for decades — perhaps a century.

At the same time, increasing the availability of transit or non-auto transportation modes should not be conflated at the policy level or in practice with efforts to make auto-oriented modes less convenient. Adding bike lanes, for example, is not the same as converting streets to bike lanes.

Transit-oriented does not mean anti-automobile. The automobile — including electric cars — will continue to serve an important role in a multimodal transportation system, just as they do in Stockholm and Copenhagen.

This leads to the second point.

As policymakers reshape the landscape to bring TOD into previously auto-oriented neighborhoods, they must keep in mind that such development may bring unanticipated if not ironic consequences. For example, one common incentive to build TOD is to reduce the required number of parking spaces for the development. This saves the developer money but, in practice, often results in the TOD tenants parking their cars in adjacent neighborhoods. The burden of providing parking is simply shifted to the public.

Failure to anticipate and mitigate such conflicts leads to community opposition to TOD, including the recent dissent from Seattle’s Capitol Hill neighborhood, which has otherwise shown strong support for transit investments.

The Seattle Times editorial board recently recognized the unique challenges posed to families, especially those with young children, of eliminating parking in multifamily zones. The article can be found at http://seattletimes.nwsource.com/html/editorials/2017926841_edit09parking.html.

Multifamily developments may provide more affordable housing for families, but transit does not always provide the flexibility and accessibility that families need. Unless TOD is to become a euphemism for workforce housing, policymakers must attend to the needs of families in adopting land-use regulations to complement transit options.

The idea of developing compact neighborhoods that provide all amenities people need to live happy, productive lives within walking distance — like parks, retail and grocery stores, and places to eat and drink — has been around for over a century. As we see this idea come to fruition in Seattle, it is important to remain patient and recognize that the successes in places like Copenhagen did not come overnight and that success does not need to come with significant growing pains.

Aaron Laing is a land-use attorney at the Seattle office of Schwabe, Williamson & Wyatt.