Is there room for young families in the city?

Generation Y, the largest generation since the Baby Boomers, prefers urban living to less-dense suburban environments. Evidence of this demand is visible in the fact that developers are rushing to build apartments packed with amenities aimed at this technologically savvy clientele. 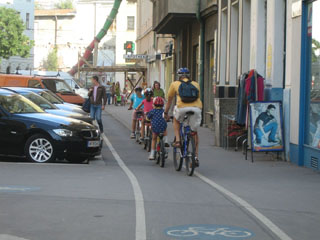 But what happens when, over the next decade, these bicycle-riding, food-truck supporting, Facebook and Twitter-loving, do-it-yourself Millennials start to have children? We certainly don’t expect them to raise children in 400-square-foot studio apartments, do we?

You might be surprised to learn that there are a number of young families with children living in downtown, by choice, and that number keeps growing every year. Your future next door neighbor in your building might be younger than you’d expect.

As more young families choose to have children, many factors will affect their housing choices differently than generations past. Large student debts could push homeownership and parenthood further into the future. A strong awareness of their environmental footprint could entice Millennials to live in smaller spaces and use fewer resources. Their preferences to save money and spend less time stuck behind the wheel fuels a demand for better public transportation, and while riding they can text, tweet, and update to their hearts’ content.

Despite these new incentives for an urban lifestyle, however, there are disincentives to living downtown that bubble to the surface when the stork delivers, including limited housing options, school quality, appropriate recreation space, neighborhood safety and transportation. The cost of housing certainly plays a major role in the decision as well and is correlated to these same issues.

Where to live with kids

When discussing family-friendly living, home size is often the first thought. However, just 2 percent of market-rate rental units in Seattle have three or more bedrooms. Also, and there’s no surprise here, as unit or home size increases, so goes the price, driving families out of the urban core.

[enlarge]
Wide sidewalks, sturdy bicycles and a culture of bicycling encourage women in Japan to tote children on two wheels. 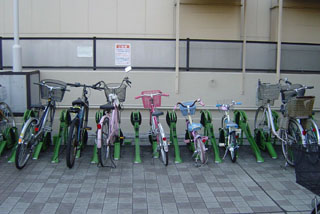 [enlarge]
Both children and adults ride their bikes to the train station as part of their commute in Japan.

In urban apartment projects, larger units often rent for less per-square-foot than small studios, which is one reason why developers build smaller units. In other cities around the world, however, developers are required to build a certain percentage of units with three or more bedrooms to encourage families to live downtown. An example in our local region is Vancouver, B.C.

Equal to housing size and cost on the list of issues affecting family-friendly cities is school quality. No matter how much they love their urban neighborhood, most parents aren’t willing to sacrifice junior’s education. With limited resources to spend on private schools, many Gen Y families will head for neighborhoods with better schools. 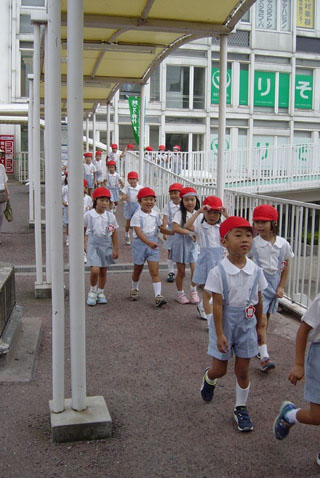 [enlarge]
Japanese school children on their way to the train station.

School quality thus affects surrounding residential real estate values. Rarely do school systems see themselves as the real estate engines that they are, and more cooperation between local governments and school systems is necessary if this is to change. Some predict, however, that as Generation Y stays downtown with their children, they could begin to turn around inner-city schools with their “do-it-yourself” attitudes.

Recreation space, both public and private, also plays a major role in where families choose to live. Access to a yard has been the standard of the American Dream for decades, but a private courtyard or large deck in a multi-unit building can fill some of the same purposes. Even a small deck or fenced stoop, like those you find in front of row homes, provides an area for a sandbox, sidewalk chalk, blowing bubbles and hunting for insects.

In an urban environment, various sizes of public parks can provide playground equipment (tot lots and pocket parks) all the way up to playfields for soccer. Simply put, downtown Seattle lacks meaningful open space that is appropriate for children. Until larger parks like the waterfront are built, the city could create “play streets,” like those in New York and Great Britain by closing down certain streets once a week for a block of time and opening them up to children’s imaginations.

Neighborhood safety is naturally more of a concern for parents than those without kids. It is easier to turn a blind eye to the broken bottles or homeless activity when you don’t have a toddler or a teenager. But I would argue that urban neighborhoods that house a larger range of ages are safe because of the 18- or 24-hour activity on the street. Sidewalks and parks are used by people exercising and walking their dogs at almost all hours, and children and the elderly use parks during the day. Also, you may have noticed that people tend to watch their behavior around children.

Lastly, transportation becomes a fundamental issue when families welcome children. Whether to day-care or school, many parents become chauffeurs by default, not by choice. If our cities were designed with children in mind, children could travel independently by walking to school or taking the light rail to soccer practice, or biking to their after-school job.

In Japan it isn’t uncommon to see children as young as 6 years old taking the train to school with classmates. By living in less dense suburbs, children and parents spend incredible amounts of time in the car, and yet one of the leading causes of death for U.S. children is automobile accidents. But wait; don’t people live in the suburbs because it is safer for children?

At the macro level, having more children downtown is a matter of responsible and sustainable land use. If all children grow up in a single-family home with a yard, we will continue to grow outwards, consuming farm land and natural resources at increasing rates. We will also continue our reliance on automobiles.

Fear not, single-family homes are not going anywhere. But at present, there are few other choices offered in the marketplace. Where are the row homes, courtyard buildings and stacked flats? 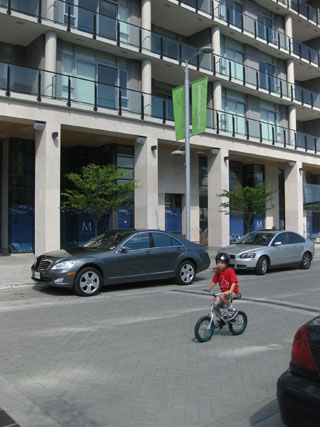 [enlarge]
This toddler in Vancouver, B.C., bikes through his downtown neighborhood on a Saturday morning.

At the neighborhood level, encouraging families to raise children in more dense, mixed-use neighborhoods allows more opportunity for exercise as kids walk or ride their bikes to school, the park, or the corner store. At a time when childhood obesity is one of the nation’s most pressing health issues, walkable neighborhoods encourage healthy lifestyle habits. Walking to destinations teaches children from an early age that not every trip requires getting in a car.

Naturally, urban streets and sidewalks need to be safer. It’s no wonder you don’t see children and parents biking in most bike lanes. Heck, I don’t always feel safe in the bike lanes and I’m a seasoned bike commuter! But there are many ways to calm traffic and share streets effectively between modes. Cycle tracks, or bicycle lanes separated from traffic by a curb or bollards, are used in Europe and elsewhere by children zipping off to middle school, parents dropping off tots at day-care and the elderly.

Families will never make up the majority of households in dense urban areas. But I believe cities and neighborhoods that can attract and retain people in all stages of their lives, not just as young singles, are more resilient and foster a stronger sense of community. Let’s keep this large wave of urban growth going by thinking about our smallest future residents.

Sarah Snider is an urban and architectural designer with LMN Architects and is the 2012 recipient of the AIA Seattle Emerging Professional Travel Scholarship. You can follow her research into making cities more family-friendly at www.downtownfamilies.com.