The key to successful TODs lies in taller buildings

Cities across the globe are touting the benefits of light rail and large-scale transit-oriented development (TOD).

From Denver’s Stapleton Station to the new Surrey Town Centre near Vancouver, B.C., planners and transit agencies are working to transform low-rise corridors into dense, vibrant and walkable communities.

Here in Seattle, the story is taking a bit longer to unfold, and regional efforts to promote TODs have resulted in inconsistent and relatively restrictive zoning around the light-rail stations. 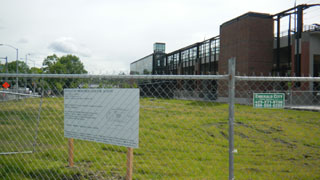 A significant challenge to increasing height limits and zoning densities is outlined in the comprehensive plan and mandated by the Growth Management Act, which empowers neighborhood residents to play a major role in determining the level of density they will tolerate near their homes.

In addition to cooperation and support from residents and businesses, local governments (Seattle Department of Planning and Development) and transit agencies (Sound Transit) must provide the necessary leadership and vision to “sell” a concept that in many instances may not be well received.

Lingering perceptions of gentrification, view blockage or loss of parking can ignite opposition and make it quite difficult for city leaders to make the necessary changes to make TODs feasible. City leaders must make their decisions by balancing neighborhood concerns with the overall benefits of height and density increases.

In the long term, increased building heights and densities at light-rail stations is a responsible, sustainable way to ensure that affordable housing options exist for people who do not own cars, and for people who wish to leave their cars at home. 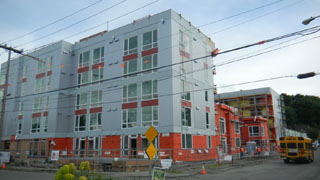 The good news is that DPD has made some notable progress over the last year, though it has had its share of challenges. For example, the net result of the recent and highly publicized “battle” in the Roosevelt neighborhood is that the only properties to be re-zoned with 65-foot limits are those within a small, three-block area adjacent to the light-rail station.

Farther south, however, building height limits around the Mount Baker and Othello stations have recently been increased to 85 feet, which should provide better incentives for developers.

“As the economy rebounds and people realize the value of these transit-oriented communities, I am confident we will see more economic development,” says DPD principal urban designer Lyle Bicknell. “In just a few years, these communities will also be connected to Capitol Hill and the University of Washington, and that will really begin to change the dynamic and appeal of these sites.”

A surge to the north

Since the opening of Sound Transit’s Link light rail in 2009, several TODs have been completed or are planned along the downtown transit tunnel. At the south end, adjacent to Union Station and the International District Station, the massive Stadium Place development is under way with its first phase, featuring a strikingly modern 25-story apartment tower. The developers recently announced an additional phase that will include a 23-story hotel.

At the north end of downtown, across from Convention Place Station, Holland Partners plans to start construction this year on a 40-story tower that will be the tallest apartment building in Seattle.

In anticipation of the light-rail extension to Capitol Hill and the University District in 2016, developers have been busy buying properties and planning a number of large market-rate projects close to the planned stations.

SRM and RD Merrill are building a 235-unit apartment building on the block next to the Capitol Hill station. Farther north, Avalon Bay is moving forward with its plans for a project three blocks from the light-rail station that will feature about 380 apartments and 12,000 square feet of retail. 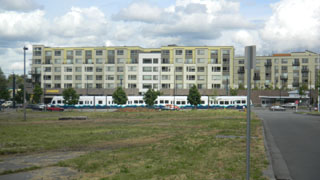 [enlarge]
The Station at Othello Park is the only market-rate TOD constructed along the south portion of the Link light rail.

At Northgate, which is still eight years away from getting light rail, the mixed-use Thornton Place project will soon be joined by a 250-unit apartment building developed by Wallace Properties.

Ironically, the scenario for the existing light-rail stations south of downtown presents a striking contrast to the development occurring at the future northern stations. Between the Stadium, Mount Baker, Othello, Columbia City, Rainier Beach and Tukwila stations, there has only been one large market-rate project completed to date: The Station at Othello Park.

Though there are a number of affordable and low-income TODs such as Rainier Vista and the Columbia City Station Apartments, it seems that many market-rate developers are still hesitant to commit to the south end stations.

Through much work, patience and vision, the city recently increased the height limits around the station to 85 feet. This substantial increase should help attract new TOD investment, though at this time no new projects have been built. However, amidst all the hustle and commerce stands a lone MUP sign adjacent to the light-rail station. Proposed for the site is a four-story, low-income artist housing project. 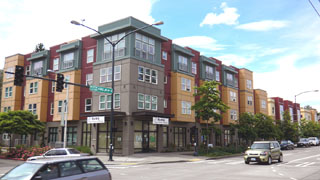 [enlarge]
Most of the TODs built along Martin Luther King Jr. Way South are affordable and low-income apartments of two to four stories.

Height limits on properties next to Columbia City Station are substantially lower than those found near the neighborhood’s historic center. Through the planning process the community expressed concerns that allowing 65-foot height limits at the light-rail station would adversely impact the commercial core of the neighborhood, which is four blocks away.

Consequently, properties closest to the light-rail station are limited to only 40 feet, while limits of up to 65 feet are allowed on the properties adjacent to the neighborhood’s historic commercial core.

There is visible new development close to Columbia City Station, most of which is Hope VI housing developed as part of Rainier Vista. Within the first few blocks of the station are low-rise apartments, single-family homes and townhomes. Mercy Housing is building the Columbia City Station Apartments, which is also an affordable housing project.

A major TOD is being planned for the six-acre site that formerly housed the Zion Preparatory Academy. Developer JC Mueller is working with the city and is hoping to increase the height limit from 40 to 65 feet, which seems quite reasonable given the project’s close proximity to the light-rail station.

Othello Station is home to The Station at Othello Park, the only major market-rate TOD built to date along this south end of the light-rail line. The six-story project has 351 apartments that range in size from 426 to 1,041 square feet, with rents ranging from $1.50 to $1.95 per square foot. The project opened in April 2011 and is 73 percent occupied.

There are only 200 parking spaces, and they rent for $75 a month. According to the on-site leasing staff, most of the residents moved here because of the access to light rail, and many of them do not own cars.

The New Holly development is also close to Othello Station and includes several mid-rise buildings, however the large sites on the west side of the station remain vacant.

There was to be a second phase of The Station at Othello Park, but it is uncertain when or if that phase will be developed by current owners.

There has been virtually no development of any kind at or near Rainier Beach Station. Adjacent to the station is a Polynesian deli and parking lot, a rental facility, a small office building, a number of single-family homes and several large undeveloped lots.

A large property northwest of the station recently sold, however the current zoning is only low-rise, which allows for townhomes or small apartment buildings under 35 feet. Under that zoning, the developer could probably get 20 to 30 townhomes on that site, however if that same site had a 65-foot limit new development could yield three times that amount.

Though the development of market-rate TODs is largely absent from the light-rail stations south of downtown, the city and DPD are moving forward with making the necessary changes to encourage higher density housing within walking distance of our light-rail system. Though progress has been made at some stations in the form of 65- to 85-foot building heights, many properties are still restricted to lower densities and lower building heights of only 35 to 40 feet.

New market-rate projects such as the GreenHouse apartments in Columbia City and The Station at Othello Park may stand alone for now, but they will almost surely pave the way for dense, walkable mixed-use neighborhoods clustered close to the light-rail stations. In the meantime, the city and Sound Transit need to keep moving forward with leadership, vision and a willingness to engage and even partner with the private sector to ensure the vision for true housing diversity and densely developed TODs become a reality.