Is it too late to invest in apartments?

Do you own apartment communities, retail or office buildings? Are you asking yourself what the safe haven is out there in the investment world, and what will offer the best financial returns for your future?

The following is a snapshot of our current multifamily investment market and some of the reasons investors have Seattle in the center of the bull’s-eye for buying, selling and developing after enduring the pain of the Great Recession.

Why do we live in this battleship-gray, overcast, rain-soaked region called the Northwest? This question is a head scratcher for many, but for those of us who call the Puget Sound home, we know why. Not surprisingly, savvy investors from across the nation and around the globe are also keen to this phenomenon.

We have it all: People are moving to Seattle because it is an incredible place to live surrounded by snow-capped mountains, lakes, rivers and our beloved Puget Sound. We attract high-paying jobs with signature brand companies like Boeing, Microsoft, Starbucks, Nordstrom, Paccar, Costco and Amazon. These companies’ founders were born and raised here. 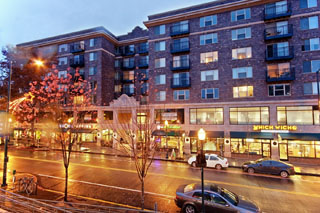 Photo by George White Location Photography [enlarge]
The Lothlorien in Seattle’s University District is a modern yet architecturally classic mixed-use apartment building constructed in 2008. Today, it is 100 percent occupied.

According to a recent New York Times article, the Seattle-Tacoma-Bellevue region ranks as the 11th most educated metropolitan area in the United States. The findings were compiled by the Brookings Metropolitan Policy Program, which ranked the 100 largest metro areas in the country.

The Seattle area has grown increasingly more educated over the decades, with its share of residents that hold a college degree rising from 14.7 percent in 1970 to a whopping 37 percent in 2010. The Seattle-Tacoma-Bellevue region is in good company, lining up with metro regions such as Washington-Arlington-Alexandria, the Boston metro area, San Francisco metro area, and San Jose-Sunnyvale-Santa Clara, famously known as the Silicon Valley.

Seattle ranked fifth (tied with Boston) out of 51 U.S. areas for commercial/multifamily investment prospects in the 2012 “Emerging Trends in Real Estate” report by the Urban Land Institute and PriceWaterhouseCoopers.

According to a Costar study earlier this year, the Seattle/Puget Sound market had the lowest average cap rates in the nation.

Investors clamor for deals in our region and we are the preferred market for a large number of them. The fundamentals for investors in Seattle have always been compelling; we have a population of just over 3.4 million in the tri-county area, and only 214,000 apartment units. That is just under 7 percent rental stock.

We have always been skewed towards rentals, which has kept our vacancy rates low and given apartment owners the ability to continuously raise rents.

Seattle is a prime gateway city with upscale neighborhoods, cultural institutions, entertainment, shopping and tourism. We are spending billions improving our mass transit. This drives demand, while our surrounding water and hills are natural barriers that limit development and supply.

So far in 2012, the tri-county area has seen 37 transactions involving apartment buildings with 20 or more units. That equates to $582 million of volume and 3,654 units for a region-wide average of $134,657 per unit. The second half of the year is poised to be slightly stronger, so anticipate the market to do well over $1 billion in sales by year end.

At the peak in 2007, we did about three times this volume.

The tightness in this investment market has put upward pressure on values. This year, sellers are recouping some of their losses from the past three years, and although buyers are paying higher prices than they did during the trough, they are also enjoying significant rent increases and fully occupied buildings.

What’s in the pipeline? It’s the question everyone in the industry wants to understand with precision.

Will we overbuild? There are a hefty number of units coming but before we react with concern, the fact is that we have not delivered much in the way of new apartment product for the past three years. And since (despite great effort) we cannot predict the future and we usually look away from a potential bubble, everyone and their brother is in full development mode. Even condo discussions are taking place.

Think growth and recovery. Look at the number of cranes around town.

There is not enough room in this article to discuss the entire pipeline of new development for the region, so let’s stick with a smaller area: downtown.

Downtown is difficult enough to pinpoint on any given day. Gathering all the data is like herding chickens — verifying which projects are actually proceeding is a monumental task. If the average salesman tries to convince you they have complete confidence in precisely how many units will be delivered, when and how quickly they will rent and at what rate, look for smoke and mirrors!

That being said, we do have our fingers on the pulse of the market and know it pretty well. All indications point to slightly more than 4,000 units coming online in the next three years. By comparison, this same area of town is used to adding and absorbing about a third of that amount per year for the past 10 years.

We added just over 1,000 units between 2009 and 2011. This might seem a little frightening at first glance. However, according to our research, even if every one of the planned apartment units in downtown Seattle is actually built, it will not be enough to meet the three-year residential demand requirement!

We’re tracking quite nicely looking back at historical data. If the economists are correct and we continue to get the job growth we are experiencing in Seattle, we all benefit.

In our combined 35 years of experience the fundamentals have never been better. We have positive leverage with interest rates in the sub-4 percents and cap rates north of 4 percent coupled with a compelling rent growth story. Investors are taking advantage of cheap money and lenders are getting an opportunity to finance some incredible projects in some of the best locations in the nation.

This is great news, but first-time buyers or developers looking for financing will need more skin in the game to secure their loans. Lenders today are doing more due diligence than ever on projects and on the borrowers, and nothing gives them more comfort than lower leverage and an excellent track record. Most in the industry see this as a good thing, intended to help us learn from past mistakes.

We have a decent run ahead of us for a number of reasons: Vacancy rates are low, with little to no signs of increasing, and occupancies are up, with people moving to town and local companies growing. Amazon alone has 2,000 Seattle job postings as of today.

The following is an excerpt from a recent publication released by the Urban Land Institute:

“A new economy is unfolding over the course of this decade, driven by an extraordinary convergence of demographic, financial, technological and environmental trends. Taken together, these trends will dramatically change urban planning, design and development through 2020. This report outlines how every aspect of living, working and connecting will change in major ways, driven in large part by the values, preferences and work ethic of Generation Y, the largest generation in American history.”

As far as we can see, this market has the momentum to potentially outlast prior cycles for a myriad of reasons.

In closing, we’ll leave you with another excerpt from the aforementioned publication:

“All signs point to more Americans renting and a further decline in homeownership as defaults on mortgages and foreclosures continue. Tight lending standards (buyers now actually need equity and sound credit histories) keep many folks who should never have been purchasing in the first place out of the market. Existing apartment owners — you are golden.”

Marty Leith and Kenny Dudunakis of Hendricks & Partners have more than 35 years of combined experience in the multifamily investment arena and are considered top brokers in the greater Seattle market.